The Diesel project entailed building a production line comprising a residual oil unit and hydrogen unit, and extensions and modifications in the refinery’s existing process units and infrastructure. The production line has been, Neste Oil can producing cleaner motor fuels from heavier and more sulfurous crude oil since 2007.

With a value close to 600 million euros, Neste Oil’s refinery investment was definitely significant. Engineering and contracting work for the project totaled an estimated 1.5 and 3 million hours respectively. 25 hectares were cleared for the project, around five of which for the actual process area. New buildings cover almost 13,000 square meters and approximately 19,000 cubic meters of concrete and 5,000 tons of steel were used.

Neste Jacobs, an affiliate of Neste Oil, was responsible for the Diesel project’s engineering, procurement and construction. The design stage employed at its peak more than 400 people at Neste Jacobs and several Finnish engineering offices.

Plant design has been done using 3D modeling tools since the early 1990s. In Neste Oil’s Diesel project group had strong motivation to use 3D for structural design and enable data transfer between stakeholders. 3D modeling was utilized starting from the underground pipes and structures and also concrete structures were modeled entirely in 3D, including the reinforcements and cast-in embeds.

The models were used to produce general and steel, element and cast in place concrete fabrication drawings and related lists. 230,000 components were modeled and 9,800 drawings together with hundreds of reports were produced.

- “Even though structural design represents just 0.4% of the Diesel project’s total costs, linking it with the plant design has been vital to the project’s success. Data communication between systems has made it possible for plant and structural design to advance in parallel,” describes Section Manager Matti Sainio from Neste Jacobs.   Neste Oil mandated 3D modeling based design for the entire Diesel project. Tekla Structures was selected as the structural design tool and four companies – Neste Jacobs, JP-Kakko, SWECO PIC and Consulting Engineers Pöysälä & Sandberg – jointly developed a software environment. 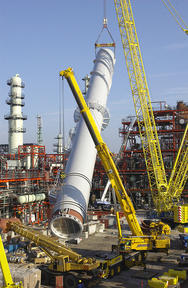 -“The idea was to incorporate steel and concrete structures in the same model. Tekla Structures was already familiar to steel designers but a new tool to those working in concrete design. The project must have had its pressures when it came to training the personnel and progressing according to the timetable. Even so, a tight schedule has been a force for change in one clean sweep, which is a positive step for the future. A lot of work was done during the project to adapt Tekla Structures for the Finnish concrete building industry,” Sainio explains.

The Diesel project set ambitious objectives for the collaborative use of models and the quality of data. All structural designers use the same multi-user modeling environment in Tekla For data transfer between plant design and structural design, the team used MicroStation file format to communicate steel and concrete geometry to the plant viewing models.

- “We initially set higher aims for data transfer but due to the schedule decided to go with a tried and tested solution. Richer data transfer would have enabled genuine collaboration between the plant and structural designers,” comments Markku Eerikäinen, Manager, Information Management at Neste Jacobs.

Avoiding collisions of structures and piping

Collision detection and pipe support design were of particular importance.  The production line has total 12,000 tons – or approximately 200 kilometers – of pipe, some fabricated abroad from costly special materials.

- “Efficient collision detection during the modeling stage has saved a lot of time and money. The same benefits were sought by modeling the pipe supports with real structures. This has made it possible to prefabricate the steel structures’ secondary supports rather than fabricate on site,” Eerikäinen says. “Overall we wanted to focus on data quality. In addition to a graphic presentation, 3D modeling produces extensive object data. It’s not enough that the drawings simply look correct – for future needs, the data stored in the database has to be accurate too.” 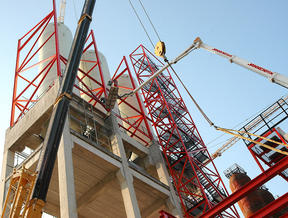 The design firm JP-Kakko was responsible for the structural design for the residual oil and hydrogen units. All structures, steel and concrete, were designed with Tekla, which was also 29 people were employed to design the steel structures and eight for concrete.

- “Tekla Structures had been in use for a long time with steel, and from the steel perspective the project has been implemented with normal performance figures. The concrete structural design actually went better than anticipated. A particular novelty in this project was the reinforcements. The concrete structures were designed within the same timeframe and with the same resources as with a traditional 2D system, which is quite an accomplishment with a new tool,” assesses Design Manager Heikki Solarmo from JP-Kakko.

SWECO PIC’s role in the Diesel project’s structural design covered connections linking the plant’s processes and the steel and concrete structures related to the sulfur chain subproject including machine foundations, pipe bridges and work platforms. Some of the structures are located outside the actual process area, others are connected to existing processes. Many of them contained modifications to the refinery’s existing systems or were connected to them, raising the level of challenge in design.

- “For SWECO PIC, the Diesel project has been a significant initiative encompassing several areas of design, and in 3D concrete design Tekla Structures proved to be an efficient and functional tool,” says Assistant Competence Center Manager Guido Vakker. In Vakker’s opinion, the option to view equipment and pipe models in the design model provides excellent prerequisites for an error-free and cost-efficient result

- “An additional benefit of a 3D design environment is that future plant users are able to familiarize themselves with the plant in advance as well as discuss the solutions,” Vakker points out.

Consulting Engineers Pöysälä & Sandberg designed several of the buildings in the process area, including two distribution substations, an instrumentation facility, storehouses and a cooling water facility. The steel and concrete cooling water reservoir is a hundred meters long, 30 wide and 30 deep. 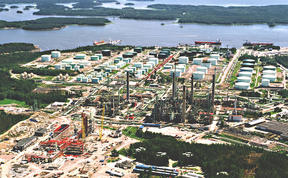 - “We’ve designed steel as well as cast-in-place and element concrete structures for the Diesel project. The lagging and reinforcement design was done almost completely with 3D modeling,” says Team Manager Matti Ahonen. He says designing steel and concrete structures in the same model clearly improved the quality of building: “It has now been easier to check the boundary surfaces. That said, for us more knowledge has also been a source of anguish – conflicts and other problems that used to be solved later down the line on site were identified already in the design stage. You have to give credit to Neste Oil for understanding the advantages of 3D design for the project as a whole.”

Work in 3D continued in the Biodiesel project

The experience gained in the Diesel project was later utilized in Neste Oil’s Biodiesel project.

- “Almost all of the design parties in the Diesel project  participated in the Biodiesel project,” says Markku Eerikäinen, Manager of Information Management from Neste Jacobs. “Continuing along the same path demonstrates that the Diesel project has been a success. I’m sure that for all involved, Diesel was a venture of which we can be justly proud. During their careers, few people will have an opportunity to work on more than a handful of projects of this class.”