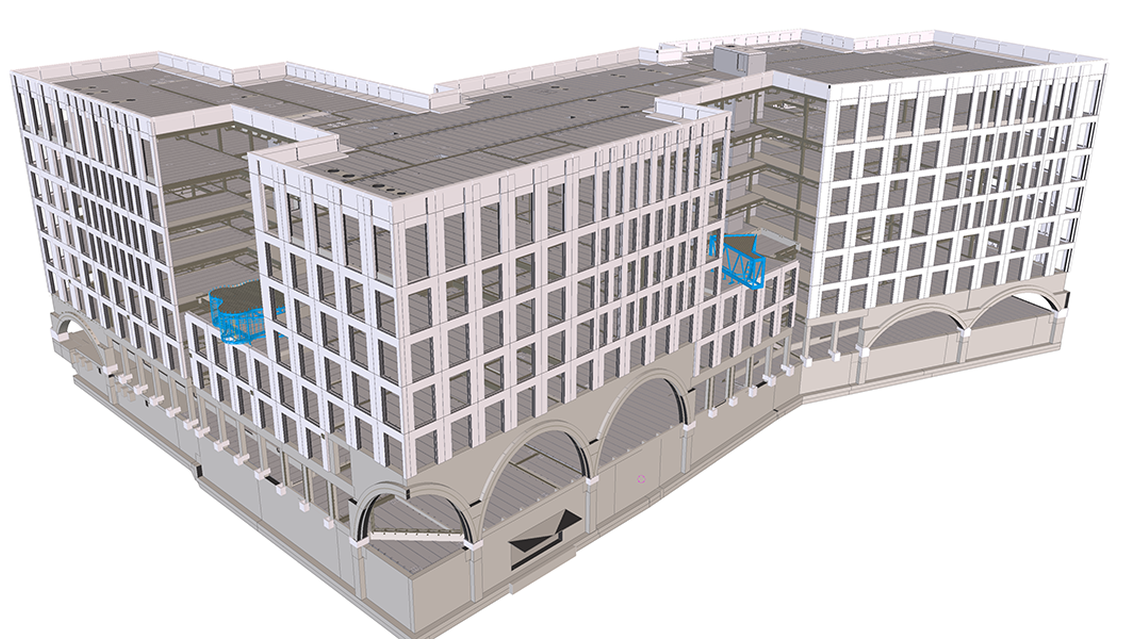 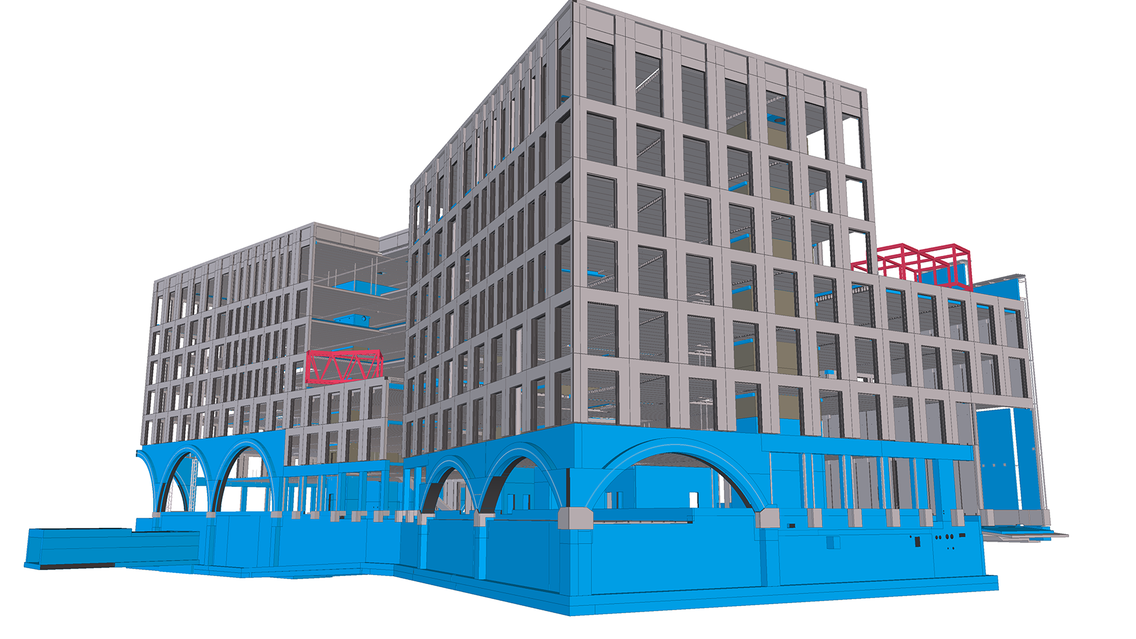 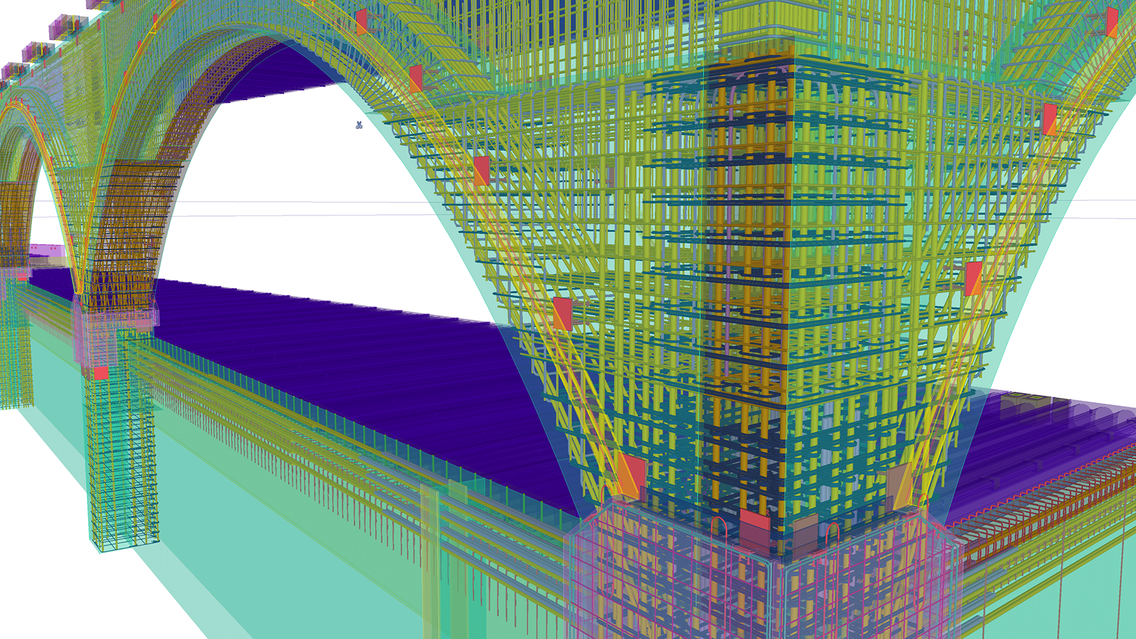 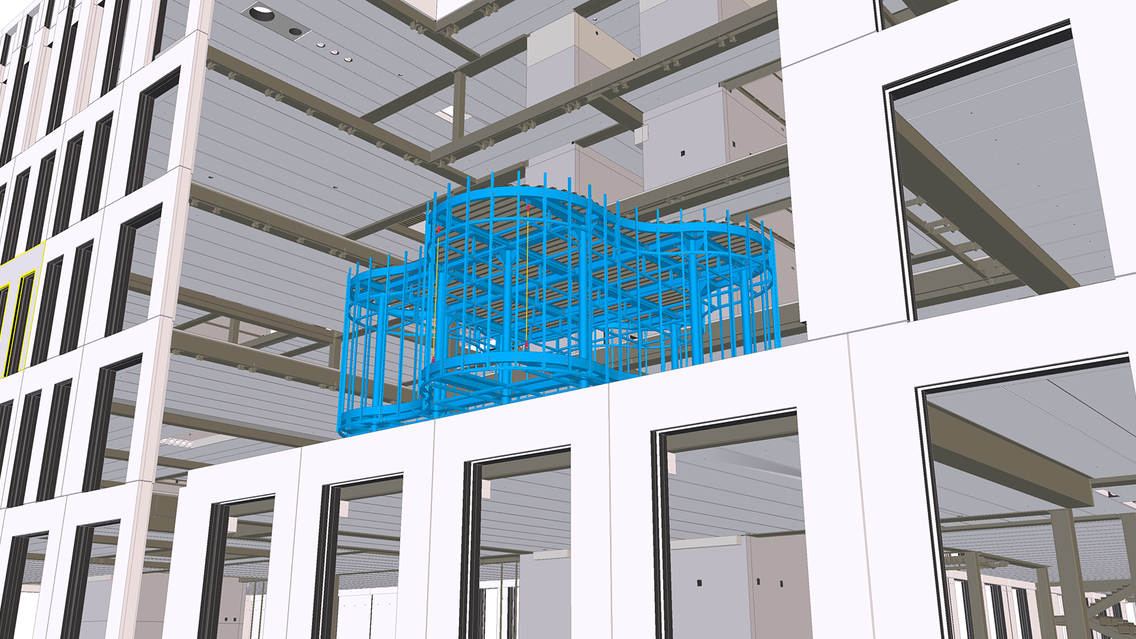 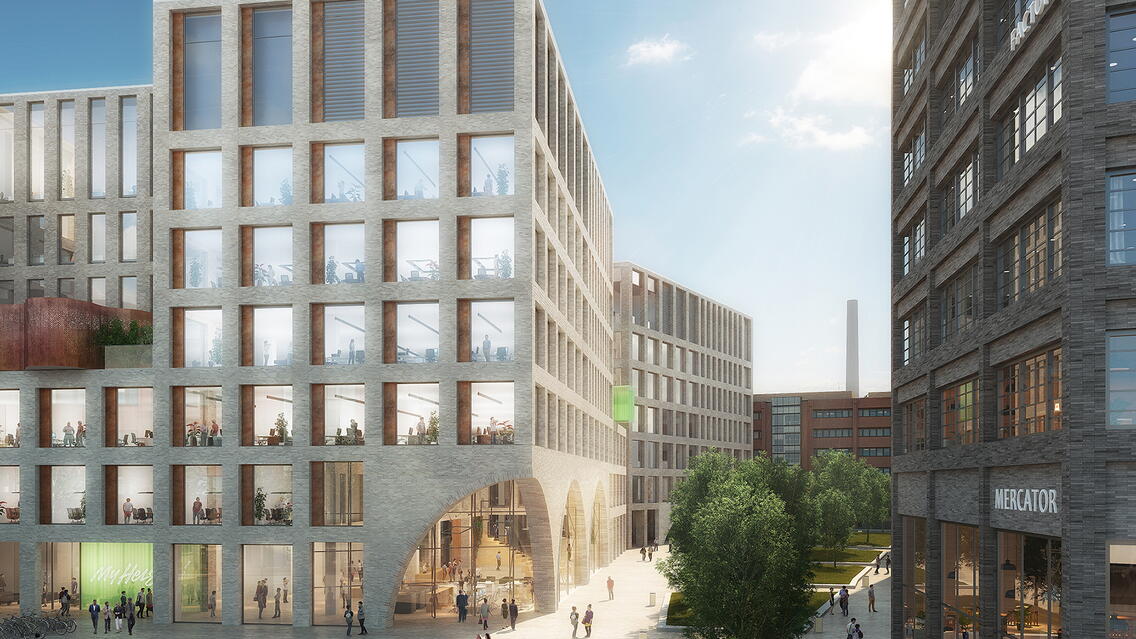 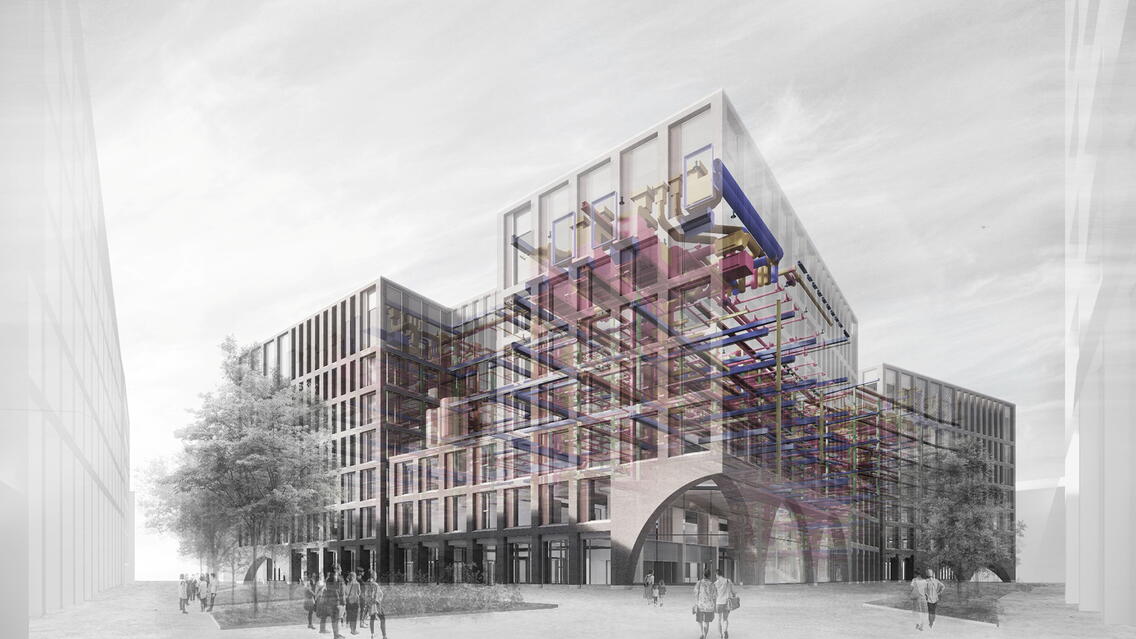 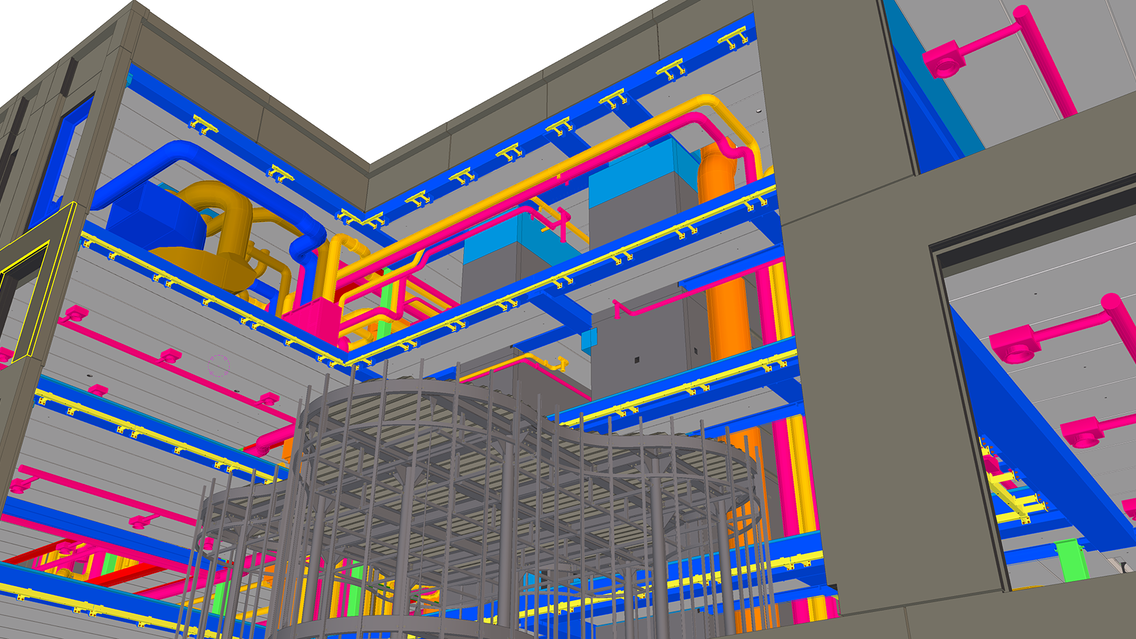 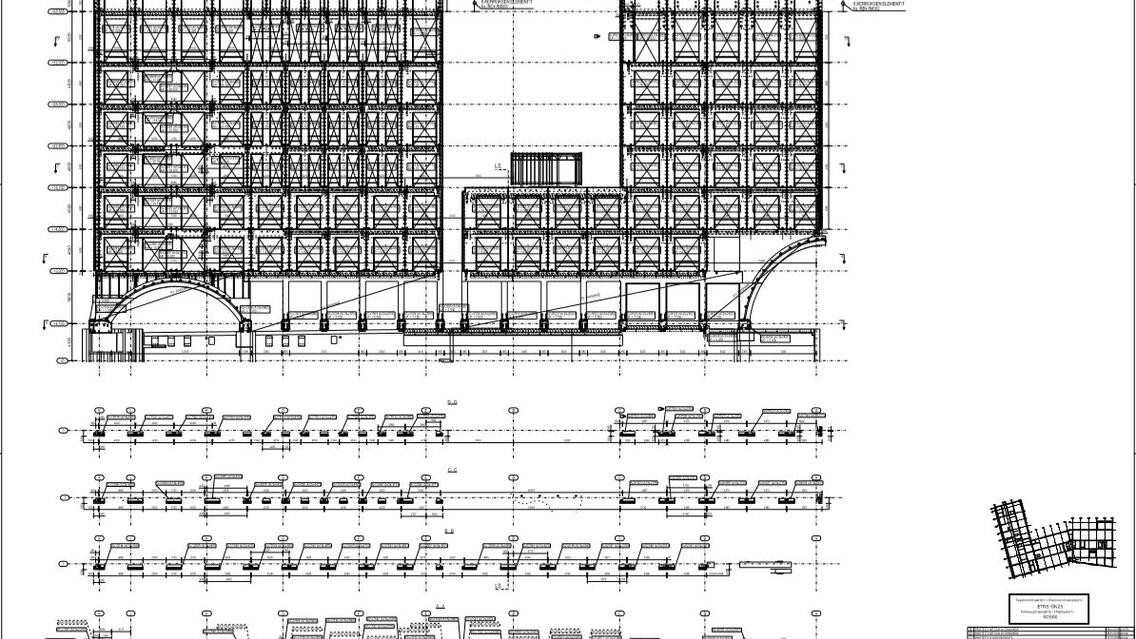 Construction began in February 2018, and the house is to be completed in the summer of 2020. This building of more than 40,000 m2 encompasses seven floors above the ground and a basement under ground. Impressive masonry arches make its facade consistent with the rest of the industrial brick architecture in the surrounding district of Kalasatama.

1500 opinions implemented in one BIM

The number-one success factor in the project was all parties’ open-minded, explorative approach to BIM and digitalization. The building information model was utilized since an early phase in the project among the stakeholder groups to coordinate wishes and needs and to produce as-built models as ordered. The various wishes and needs of the City’s 1500 employees were collected and imported into one building information model through dozens of pop-up workshops which allowed developing the model in cooperation with the end users. Their needs were addressed by utilizing VR glasses, BIM cave events, and 360-degree views, for example.

Models functioned as a frame for scheduling, sustainability and 3D-print visualization

With the help of BIM the project achieved its ambitious lifecycle objectives, including a BREEAM certification, and the design solutions were evaluated comprehensively in terms of emissions, energy efficiency and indoor air quality by utilizing lifecycle modeling and multiple criteria optimization. Lifecycle design regarded 1,500 simulations of alternative implementations. Dynamic simulation of energy use was also carried out based on BIM.

The project utilized status information from the model exceptionally extensively to visualize design, fabrication, installation and CIP progress. Scheduling challenges were tackled with an illustrative, digital frame-phase 4D timetable. Status data for the building components was communicated to project parties by using Trimble Connect and the structural designer’s native Tekla model. This status data provided participants with real-time information about the project and various project parties also in terms of design and installations. The data was used and updated by five parties, including design, fabrication and installation suppliers, and the data provided up-to-date information about the processes. This project also experimented moving precast unit information directly from a Tekla report to the manufacturing management system. This enabled automatically updating status data from the system to Trimble Connect.

The flat arches prone to changes in outdoor temperature required 3D calculations to discover their temperature fields and the stress caused by the fields on the different parts of the arches. A solid model was created based on the Tekla model and imported to COMSol to solve the functionality of the structure. The 3D model of this challenging structure was used to clarify the function of the structure in 3D calculation, and 3D printing was used to understand the CIP structures.

The levels of detailing in modeling steered design coordination

To support the design, the models were used to produce virtual modeling information, and in addition to traditional coordination meetings, the design solutions were visualized in a BIM cave. Workshops to solve design details were held with the client and the builders so that several persons were able to simultaneously review work rooms, their details and constructibility, for example. In terms of design coordination, it was particularly challenging to address structural demands and to match the building services engineering with the architectural vision.

The building services products and components were modeled to an exceptional level of detail. For example, the district heating and cooling equipment manufacturer delivered the 3D models of their selected units for the use of the MEP design team. This way the hauling routes and installation orders of the equipment could be checked in the BIM before ordering the products to be delivered on site. The contractor saved significant amounts of time by not having to coordinate installations on site. In addition to the above, the MEP models were on an as-built level already at designer’s submission.

Special attention has been paid to occupational safety on the construction site and in the use of the building. Induction to the site was carried out virtually. This was a way to safely present and visualize the safety risks before actual work on site. The induction was interactive and utilized simulated situations in which the employees were required to find faults in safety. Site visits were organized virtually, too, by using 360° images.

Dalux Field augmented reality features were used to assess quality and hand over the rooms by mobile connection, for example. TR safety measuring and observations were conducted using Insta Audit. Hazard announcements, risk assessment, and hazardous substance management were carried out using mobile and BIM connections. Visualizations were largely utilized in the project, particularly in dust, cleanliness and moisture controls which were scheduled, visualized and digitalized using BIM. This ensured achieving the healthy-building objectives of the project.