Large new commercial and transport complex for the capital area

Tripla is a complex of three city blocks in the Pasila district of Helsinki. This huge project includes the Mall of Tripla, offices, apartments, a hotel and the renewed Pasila station.

It will cover circa 363,000 grm2 in total, and when completed, the Mall will be the biggest shopping center in Finland measuring by the number of retail premises. Tripla will connect the existing districts of East and West Pasila as well as the new residential areas in the north and south of the area so that Pasila will form a new vibrant hub in central Helsinki. Construction began in 2015, and the Mall and the station will be opened for use in October 2019. The rest of Tripla will be completed phase by phase during 2019–2020. The project group participates in the Tekla BIM Awards 2019 competition with the Tripla part that doesn’t include the renewed Pasila station.

All project parties took an open-minded and experimental approach towards BIM and digitalization, which was a major success factor in the project. Various software products and technologies have been tested and put to use in the project. If a ready-to-use solution has not been available, the team has created custom solutions and ways of working, where possible, to support the successful completion of the massive development. Building information models and model-based visualizations have played an important role in the negotiations between the various stakeholder groups, including authorities, as well as in marketing. The models have been used daily by the designers as a source of information and a way to understand the building’s conditions. Coordinating and combining various designs and source information were particularly challenging tasks in which the shared building information model played a key role. BIM helped match the building structures with infrastructure engineering, a prerequisite for the on-time delivery of different design disciplines' outcomes. It was decided to share the site model in the cloud.

The model kept growing in file size with the architectural design, and this was an IT challenge. It was tackled by dividing the models into smaller units and separating the published versions and documentation from actual building block models. The challenges regarding decision-making and scheduling were met by agreeing on an email protocol. The site model helped coordinate the construction site and related communications. It was updated constantly and shared among 400 staff members, and it also helped the logistics planning.

All of Tripla was designed by building information modeling

The project’s model data is exchanged in IFC format, and the main design disciplines involve approximately 100 IFC models. These models are organized into section-specific Solibri combination models. Each section has its own BIM coordinator. Autodesk products were used to transfer data from the infrastructure design tools and to match the data in the building software. Simplebim was needed to create tenant-specific models, special models for technical facilities, and especially to produce interface models. All critical construction phase tasks have been 4D-simulated using Tekla Task Manager and Solibri. The construction site also utilized VR devices to view Tridify models and 360 visualizations. The benefits of BIM for site logistics are obvious: in addition to visualization, also occupational safety, scheduling, costs and quality are easier to manage.

Laser-scanned data from the excavated rock surfaces was imported to the models and split into separate combination models. These were used as source data in the design of business premises for the future tenants of the buildings. Drawings and building information models have been combined to visualize design entities, and sectional models have been utilized to coordinate and combine MEP contracting. All Tripla building information models can be accessed by subcontractors. For example, the HVAC technicians can utilize the combination models on their laptops on site. Thanks to the BIM-based tools, the specialists participating in the facade workshop were able to immediately assess window sizes and features. Thereby the model enabled reviewing the buildings’ energy performance in real time. After the workshops, the technical requirements for the facades were known to all at project level, which enabled creating the first cost estimates.

Several Tekla software products were used in the project during preconstruction and construction, including site planning, QTO, scheduling and follow-up. The CIP contractor and reinforcing bar fabricator also used Tekla for modeling, and ready-to-use components from Tekla Warehouse were used in the project. Reference models from all design disciplines were used as source information for structural and fabrication design and detailing. Model data was exported to production planning by sharing the model with the steel-part fabricator and their ERP system. Facade element deliveries were modeled in detail, and these models were accessible to other design disciplines. This ensured the impressive facade architecture.

The custom components created by the structural designer and those publicly sold by Ramboll were used extensively in this project. In addition, the quantities created for the BEC project in the IFC model were extended for the site by adding the formwork areas to the IFC model to calculate the amount of formwork needed. Structural analysis and calculation were performed using RFEM software. Data was exchanged manually between the A&D software and Tekla Structures. In addition, AutoCAD and RC CADS software were used for frame documentation.

From the structural designer’s point of view, comprehensive modeling helped visualize design solutions to other parties, obtain correct quantities, match designs without errors and utilize up-to-date reference data, such as hole reservations, in the model. Both the drawings and the building information model were delivered to the client. 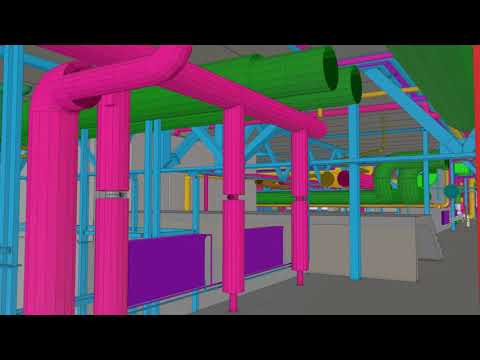