The scope of Eversendai was to provide connection design, shop drawings, BIM Coordination, erection and engineering study, workshop fabrication drawings, supply, fabrication, painting, fire proofing, composite floor decking, and erection of structural steel works. All the above scope of works was completely taken care of by the in-house Design & Engineering Department of Eversendai and successfully completed in line with project schedules.

The project Clients are Zabeel Investments & North25. The architect design by ADP Ingénierie and the structural design is by Derby Design. The main contractor is Arabtec Construction LLC- Dubai.

The Tiara United towers is a 50-storey twin tower, each about 216m high , located in Dubai.

The mixed use twin towers project was awarded to Eversendai with structural steel works scope of about 29,340 metric tons.

The project consists of 50-storey twin towers with a central concrete core wall and perimeter steel columns, steel beams and composite deck slab floors. The structural framing system is provided with perimeter structural steel belt trusses at two levels (between levels 7 to 8 and levels 30 to 31) between the perimeter steel columns and an outrigger (between levels 30 to 31) between steel columns & the core wall. The featured roof steel structure consists of about 12-meter-high box truss columns at all four corners of the building supported on floor beams. These box truss columns are tied around with about 45-meter-long single span box trusses. Steel trellis of built-up RHS 1000mm deep X 200mm wide are provided at 2000mm c/c spanning about 30 meters between the roof trusses.

Considering the complex nature of works at various stages of construction, including the strengthening of an as-built structure, the Tekla steel structures modeling played a vital role in the successful completion of this project. Tekla BIMsight was used extensively to identify the clashes with other trades like roofing contractor, façade contractor, MEP contractor and RCC contractor. These clashes were resolved during the design stage itself.

The unique and complex steel erection coordination requirements made this project one of the most challenging projects for Eversendai. As always with Eversendai, this project was also successfully modeled & coordinated with all other trades. Fabrication drawings were released, fabricated and erected in line with the project schedule. 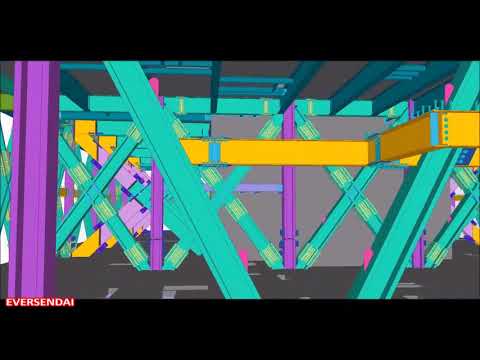