The construction of the Taiga “ride on tracks” for the Linnanmäki amusement park in Helsinki, Finland, kicked off in 2018 and was completed in 2019.

Taiga is the fastest LSM (Linear Synchronous Motor) double-launch coaster on the northern hemisphere, respectively in the Nordics, and provides a great view across the capital city.

An old fun house of the park was demolished and replaced with a utility room and waiting area for the new ride. To make room, two more older rides and one kiosk were also demolished. The project used circa 3,500 m3 of ready-mixed concrete, 250,000 kg of foundation reinforcements, and circa 200 stressed anchors. The track’s length is 1,104 m, and its highest point is 52 m above sea level. The two trains on the tracks can reach a top speed of 106 km/h, and they make four inversions during the ride.

The project schedule was determined by the amusement park’s season. Demolition work was started after the summer season, and the ride needed to be ready to use by Midsummer the following year. In addition to the structural engineering of the structure’s foundations, AFRY Finland’s assignment included the design of utility and maintenance rooms and a waiting area.

Challenges included the demanding roller-coaster geometry and fitting in the ride between existing buildings and equipment. The new buildings were built very close to the track, too, and one column for the tracks takes place in the middle of the store. In order to establish safety areas around the structure, all nearby buildings and equipment were laser-scanned. The landscape includes major elevation differences, a challenge to designing the foundations. Under the amusement park, there are large rock tunnels that needed to be taken into account with the stressed anchors which at best drill down 12 m into the basement. A laser-scanned model of the rock tunnel was used as a reference.

BIM helped to coordinate the design disciplines and terrain geometry

The contractor performed extensive laser-scanning of rock surfaces on location, the results of which were utilized in the design of the foundations, including geometry, excavations, and stressed anchoring to the basement. BIM-based coordination prevented structural “clashes” and helped achieve safety distances.

Construction progressed smoothly with the general design matching the true geometry of the terrain. The coordinates of the basic bolt groups were shared to the construction site from the model, and as-built dimensions were checked using BIM. The challenges recognized in the beginning of the project translated into success factors by the end of the project.

The use of Tekla Structures (2017) was highly useful in the design of the foundation for the track because it allowed using laser-scanned terrain geometry data as a design base. The designs accurately reflected true terrain conditions, thanks to which the site was able to order foundation reinforcing bars bent at the shop and ready-made concrete to match the casting quantity. Use of Tekla Structures helped perceive the project as a whole, review and coordinate designs, produce bills of materials, and induce new employees to the project.

Reference data included track supplier’s 3D DWG files, laser-scanned data of existing buildings, terrain geometry model as a point cloud, and the architect’s model of the new buildings in IFC format. Excel and Mathcad software were used for structural calculations. Foundation loads were provided in an Excel file, from which the loads were imported to the software that was used for calculation. The client received drawings of the design only, no building information model. AutoCAD was used to create type drawings for the project. 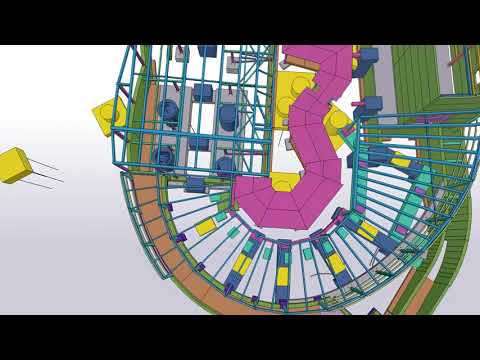