This project consists of 4 towers and is located in Polanco, Mexico City, Mexico.

Initially, once the project was won, Grupo Baysa (fabricator and erector) saw the opportunity to present a case of Value Engineering that represents an economic and manufacturing advantage, giving benefits for the customer, the manufacturer and the project in general.

Exhaustive analysis and feasibility studies concluded that the best option was to have several SRC (Steel Reinforced Concrete) columns.
The study was presented by ’Alonso y Asociados’ and the proposal was accepted. Within the two towers, they looked at columns in the concrete-filled box and was reinforced with rebar, this required a previous analysis to define the length of the columns in function of the rebar length, as well as the assembly, assembly process and logistics for casting of each section of columns. It was necessary to make the joints design and tests to determine the concrete fluidity and precise consistency for the correct pouring of each column.

Prior to the Shop Drawings, and based on a Tekla model, logistics proposals were considered for the structure’s erection, possibly using two cranes with the possibility of having internal assembly through vertical formwork.

It was essential that a documentary control be implemented by Lendlease so as training for information coordination was made. They were informed that with each model, the highest building models would be delivered in DWG format and also in IFC. Also, the numbering could be a problem whenever the pre-established zoning for the service and deliveries were required, the proposal required 21 days to be reviewed and approved. A particularity of this project is the structural engineering plans and development for each level. The calculation implemented three plans: one to establish the profiles for main parts, another to define the levels of each floor and a third one to define the type of connection for each joint. 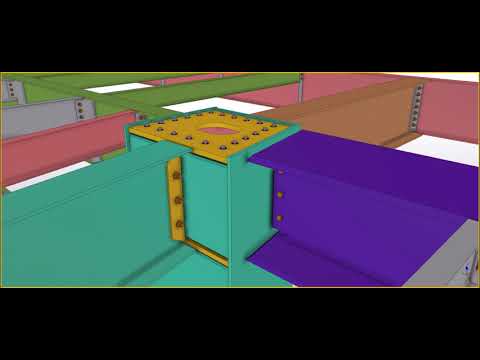