Pumppupuisto is a residential block located in the district of Kaivoksela in Vantaa, Finland, consisting of four apartment buildings and three housing companies.

The block includes 224 apartments in a gross area of 14,224 m2. Completed during the years 2018 and 2019, the project has utilized building information models, developed precast concrete manufacturer Betset’s BIM-based ERP system, piloted a BIM-based building permission process under a national digitalization project, and familiarized with 4D scheduling using Synchro software. The 4D experience gained during the project will be utilized in future developments. The precast concrete units produced for the project contain 158,510 kg of steel and 3369 m3 of concrete, and 5343 m3 of concrete was cast in place.

One of the challenges of the project was to design the facade elements of housing company Vantaan Termo’s balcony access gallery and to match the solution with the parking facility to be built next to the building. Another building, Vantaan Mittari, involved overlapping load-bearing structures, which required specialized design solutions. In addition, the locations of the kitchen and bathroom modules affected the assembly order of the building units. The designers needed to design structurally viable units for the use of the construction site only. BIM helped understand the load-bearing structures and unit and joint connections as well as with on-site assembly coordination, and BIM played an important role in the development of standard solutions and components for the main contractor. A dedicated light-weight steel mold was developed for the reinforced concrete slabs of the French windows. The mold has been utilized several times during the project and can be utilized in the future, too. The use of Tekla software also helped develop a detailed standard steel rail for the balconies.

The greatest challenge in the project was keeping to the building permission schedule. Participating in a national digitalization project aiming at developing a BIM-based permission process helped tackle the challenge. The objective was to shorten the permission handling period that may take up to several months when following the traditional procedure. By way of this project the main contractor was able to participate in a unique collaboration program and influence both permission handling as well as urban planning in the area. In addition, the project helped develop rules for BIM inspection software.

One of the greatest success factors in the project was BIM-based collaboration with the precast concrete manufacturer and the utilization of model data in the production of precast units. During the project, a Betset plugin was tested in Tekla, and the data to manufacture the precast units was transferred to the manufacturer’s systems directly from Tekla. This development advanced all the way to following up on the status of the precast units as well as their delivery on site. Trimble Connect’s Status Sharing challenges were tackled by founding a set of title codes in the software. Using the tool throughout the units’ lifecycles benefitted the designers, the manufacturer and the site alike. Site personnel uses the tool daily to monitor site status.

Regarding project schedule and scope, it was important for the designers to understand the BIM-based ways of working. Design work was smooth as all the parties worked with BIM, and the models were combined in a coordinated manner. The building information models were shared using Trimble Connect, and the combined models were kept accessible to all parties. Architect and main contractor’s BIM coordinator reviews helped solve potential discrepancies and safety issues, bring up design needs and create model data to benefit the construction site. Due to the visuality of 4D scheduling it was possible to compare the frame schedule to the actual schedule status.

Other important success factors include BIM-based procedure implementation in design, design management as well as construction. Throughout this project, all of the site personnel were activated to use building information models and ponder their objectives. The project also produced a thesis addressing site personnel’s competence.

The use of Tekla Structures in this residential project helped and accelerated BIM coordination, thanks to the precast design tools and drawing templates among other, and reduced human errors to minimum. In addition, the Trimble Connect collaboration platform was used as a project bank for the building information models. During the project, Trimble Connect turned out to be a good way to share models and related data. Another benefit with the platform was that the models were quick to open without a separate viewer application. The team tested project communications using the ToDo tasks in Trimble Connect. The site sent comments and questions to the structural designer using Trimble Connect, and the designer commented the questions in the same software. Trimble Connect is also used on site via mobile devices, such as tablets and smart phones, to open building information models. Moreover, Trimble Connect was used to visualize structures, fetch structural data (incl. quantities, dimensions, gross areas, weights and elevations) and to determine structural object status. 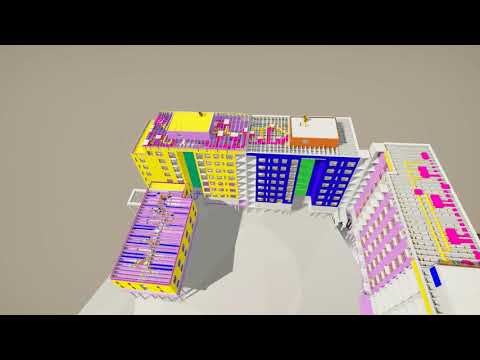