In 2013, Sandvik commissioned the Peppertree crushing and screening plant for its client Boral.

The site is located 2 hours from Sydney, Australia. With 6 crushers, 9 screens, nearly 3.4 km of conveyors belts, and an entirely automated train loading system, the project is one of the most complex ever completed by Sandvik. Following amendments to Australian regulations on dust inspection and workplace conditions, Boral contacted Sandvik in 2018 to add a centralized dust extraction system to their factory. Sandvik teamed up with FB Filter Bau, a longtime partner based in Germany to design and deliver an efficient solution.

With over 60 dust extraction points spread over an industrial plant, the design of a centralized dust extraction system was a challenge. The existing plant had been drawn using multiple applications (Solidworks, Autocad and Tekla Structures): the existing 3D elements were imported in Tekla, and those in 2D were schematically modeled to be added to the model. Moreover, electrical wiring, water and compressed air system mapping, and even upgrades done since 2013 by Boral were all unclear to Sandvik. So Sandvik decided to conduct a 3D laser scan to integrate it as a point cloud in the reconstructed model and correlate it to the actual building. The 3D scan was done by Trimble France with the help of a local partner. Use of the point cloud proved its merit by easily adding a further level of precision to the factory model, which was critical for designing the dust extraction system. The final Tekla 3D model combines the new centralized dust extraction systems designed on Tekla and Autodesk Inventor (by our partner FB Filter Bau), as well as the existing factory elements and the point cloud.

The main challenge was incorporating the complicated new equipment into the existing factory which was not outfitted for it and whose blueprints were not entirely available.

How have Tekla Structures and BIM benefited you? What other Trimble tools or software have you used:

Tekla Structure enabled reconstruction of a full 3D model of the factory from existing models and drawings, both through importing models from other applications and legacy Tekla models, as well as schematic modeling of the rest, all of which had never been done before. A Trimble 3D laser scan of the existing plant provided a comparison between this model and the actual plant. This served as a basis for designing new equipment using Tekla and Autodesk Inventor. The totality could then be reconstructed. 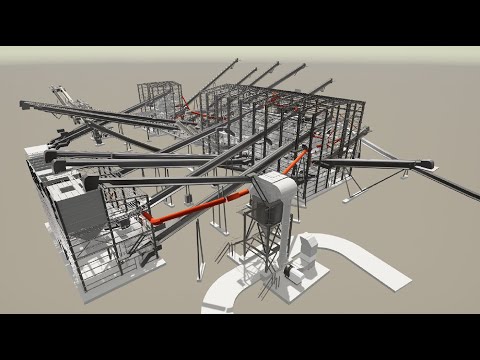