The Opera House at Downtown West Dubai (OHDD) is a new development at the heart of the Downtown area in Dubai next to the Burj Khalifa and Dubai Mall. Set to become one of the most significant, vibrant and successful performing arts and entertainment centres in the Middle East, Dubai Opera is a 2,000-seat, multi-format theatre, set to captivate visitors when it opens in 2016.

It is central to The Opera District, a new arts and lifestyle destination in Downtown Dubai, home of global icons such as Burj Khalifa. The design of Dubai Opera is deeply rooted in Dubai’s maritime history, with the Arabian dhow becoming the inspiration behind the architecture of the building. The ‘bow’ of the structure will contain the theatre’s main stage, orchestra and seating areas, as well as a sky garden and restaurant which will boast views over Opera Plaza and Mohammed Bin Rashid Boulevard.

Eversendai Engineering LLC was awarded this prestigious project to perform Engineering & Detailing works and also to execute Fabrication and Installation Works for all structural steel works. The Total weight of Steel involved in the Project is 3,600 M Tons.

The main roof is a complex long span structure with the forming the architectural surface whilst minimizing the number of trusses and bracings through roof lights and MEP ventilation louvers. The main roof is approximately 130m long and 80m wide. The front of the building is approximately 38m high and the feature prow column is tip is 42m above promenade level. The roof cantilevers out from the glazed façade by approximately 9m at the front of the building, 3m along the sides and 5m at the rear. The longest spanning steel truss forming part of roof support is 37m long.

The Lower and Upper Balcony steel trusses support the seating RC slabs above. These are coordinated with the Concrete Contractor and all the clashes with these trusses were identified early and avoided successfully. Further to this, additional bracket support systems were provided to receive the RC slab above the trusses. 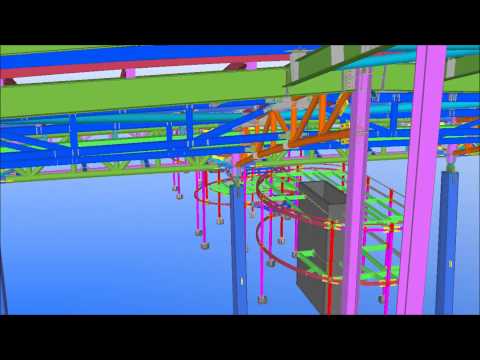