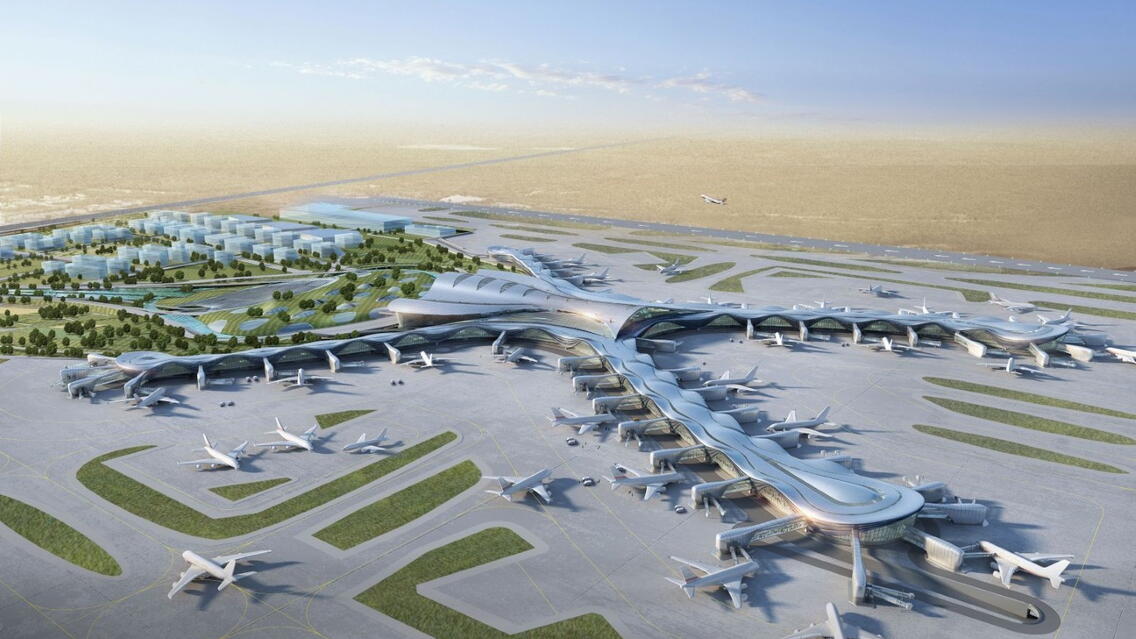 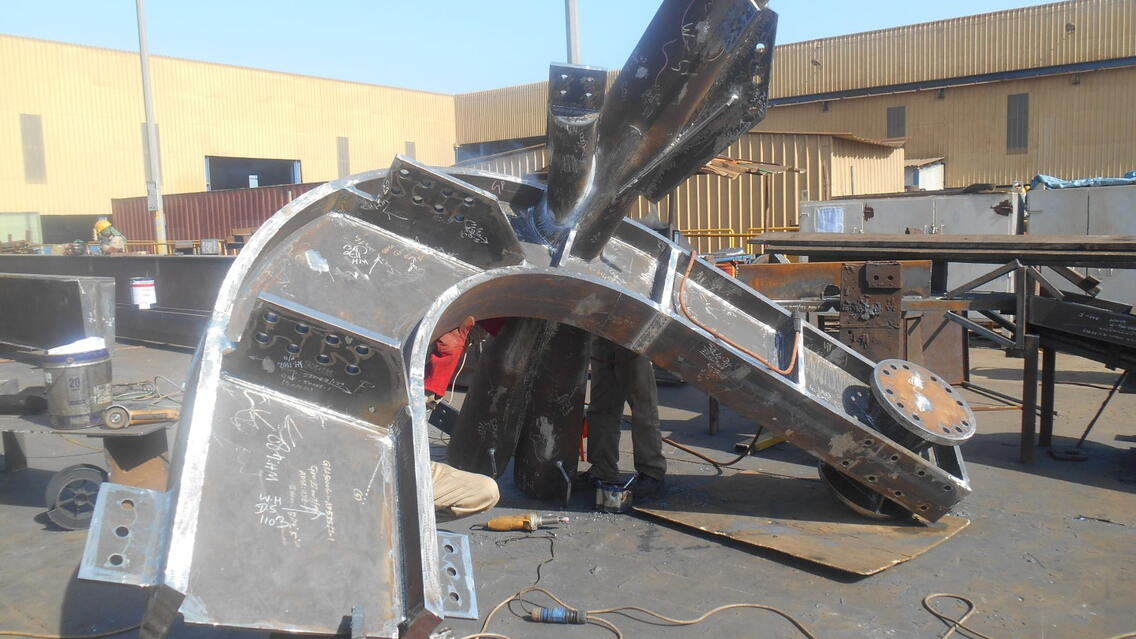 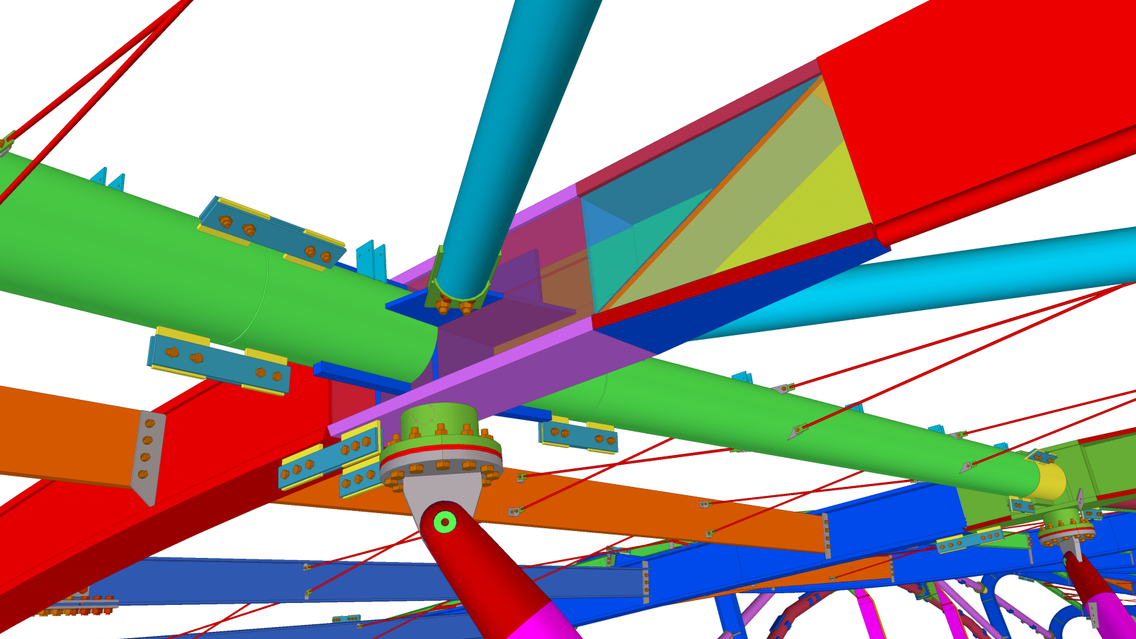 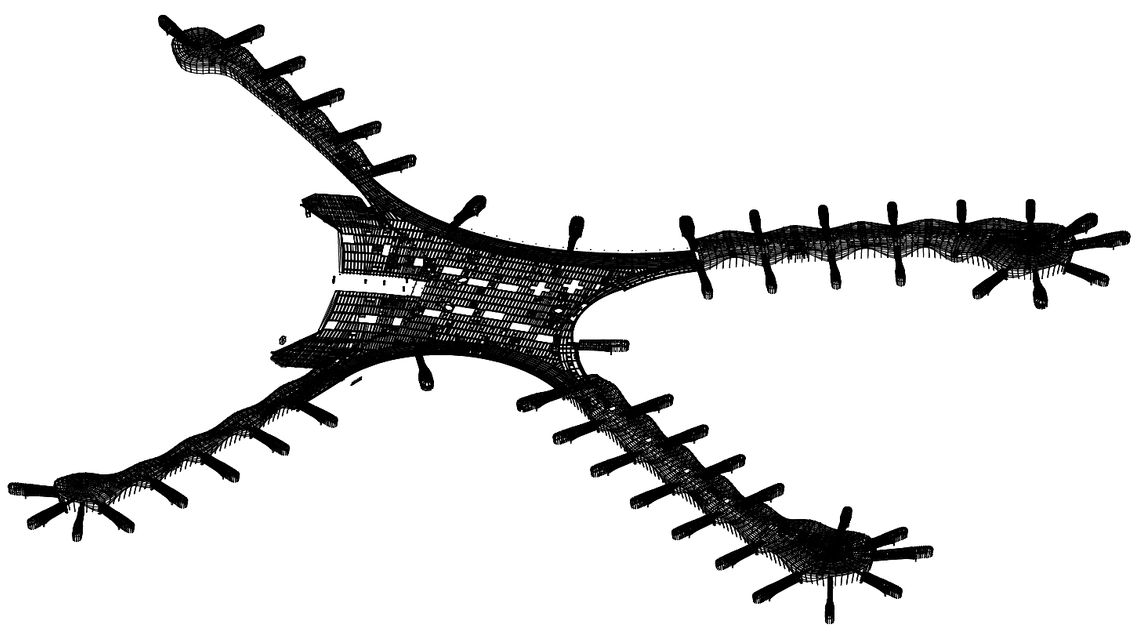 The Midfield Terminal Complex is the integral part of progressive development plan of Abu Dhabi 2030, transforming the desert into the ‘Garden of the Gulf’ through a design that responds to its natural environment, while meeting the needs of the rapidly expanding capital. The plan of this prestigious Airport Project in X-Shape which provides the greatest programmatic efficiencies enabling the having 49 gates which would ultimately process around 50 million travelers each year. The roof of the piers along the X is ‘pulled down’ on the facade in an undulating form to protect the building and its habitants from the sun.

The Concourses Roofs are undulating, doubly curved surface that rises above Departures level. The arched façades of the pier slope outward approximately up to 5m on each side resulting in maximum width available for the roof typically. The main rafters are arranged to span between the structural mullions and the “V” columns.  Structural mullions support the ends of the rafters and are formed of triangular hollow sections. The tops of the “V” columns are tied together by the spine beam which also forms the chord of the transverse stability truss.

The “V” columns are circular sections tapered from top to bottom that spring from the Sterile Corridor level and are rigidly connected to the concrete column beneath. The connection with the rafter is achieved by a pin connection to a stub column through molded castings at the underside of the rafter that brings the connection out of the ceiling zone. Roof purlins are spaced at about 2.5m centers and span approximately 7.5m between the rafters.

The Gatehouses provide access between aircraft and the Concourses. They are two storey structures, connected to the Piers via deep truss bridges which are called as Fixed Bridges. The main structure of the Gatehouses themselves comprises structural steel columns which provide support to composite beams and an in-situ composite deck.

The Passenger Bridges also comprise structural steel beams and columns, however, the diagonal members of the truss are to be tension only members and take the form of high tensile steel Macalloy Rods of Dia ranging from 60mm to 150mm. The enclosure to the Gatehouses takes the form of a series of curved portal frames which rise from L2.0 to their maximum height where two ‘spine-beams’ provide support to the ends.

Considering the complex geometry nature and precise interface requirements with various trades, The BIM Implementation and coordination played a vital role in successful completion of this project. Tekla BIMSight was used extensively to identify the clashes with other trades like Roofing Contractor, Façade Contractor, MEP Contractor and RCC Contractor and these clashes were resolved in the design stage itself.

The complex geometry of the structure and the precise BIM coordination requirements make this project as one of the challenging projects for Eversendai. As always with Eversendai, this project was also successfully modeled and coordinated with all other trades and fabrication drawings were released in line with the project schedule.