Once completed, the DART will be a driverless system providing transit along the 2.1km route, with the journey time from the station to the terminal, or vice versa, taking approximately five minutes to complete. At present, this connection is serviced by a shuttle bus, with service reliability and journey time heavily affected by traffic congestion. The DART will avoid the need for such a shuttle bus service, providing a more direct and reliable connection therefore reducing stress to passengers and improving their experience.

Hewson are structural designers for the two stations on the DART, working within a wider design team for the D&B contractor Volker-Fitzpatrick Kier JV (VFK JV).

Parkway station is a two-story building providing connectivity between the DART and the surrounding area, including a direct link to the existing railway station. DART trains arrive via a viaduct structure with platforms and concourse area on the first floor, and vertical circulation providing transit to ground floor. Drive systems for the cable-pulled trains are housed at ground level below the concourse area.

Central Terminal station is a underground station within the airport terminal, with rail access via a new adjoining cut and cover tunnel. From platform level approximately 10m below ground, passengers will transfer to ground level and directly into the terminal building. The underground structure also houses a train maintenance facility, past the platforms, for train wash down and servicing, as well as back of house rooms and facilities.

Both stations were modelled in Tekla Structures, including all concrete, reinforcement and steelwork. Larger elements of temporary works, also designed by Hewson, were included within the same model in order to ensure compatibility with the permanent works and to aid communication of design and construction intent.

Construction of the DART civil structures is well underway, with a target opening date of 2021.

As is typical for Design & Build projects, the programme provided a key challenge for design and construction of the DART system including the two stations at either end. Detailed design submissions and approvals were thus phased to conform with the intended construction programme.

At Parkway station the close proximity of the existing railway station and tracks formed a key constraint, whilst within the airport terminal itself the space available for construction of the Central Terminal station deep basement was particularly limited. The footprint of Central Terminal Station passes below an existing airport footbridge, requiring its intermediate piers to be underpinned and their piled foundations removed as part of the works, with a new load path constructed below using the new station structure. This required careful sequencing and control, as well as closely-integrated permanent and temporary works (both included within the same Tekla Structures model).

The benefits of using Tekla have been numerous. Early in the project we pushed for IFC model transfers to ensure interoperability between each discipline’s models, which were created in a variety of programmes (including Revit, Civils 3D, Tekla). Tekla BIMSight was a key tool in getting buy-in to this, due to it being free to everyone on the project and easily accessible with its simple user-interface and ability to quickly combine numerous models. This was a very helpful way to federate models ‘informally’, in addition to the formal project Common Data Environment.

With such large structures, model sharing has also been invaluable for the model production – with up to six or seven people working on different parts of each station at any one time, across three companies. We have found the model sharing tool to be extremely reliable and efficient, and looking back it is hard to see how the models could have been completed on time, to the required level of detail and quality, without this feature.

As the project has progressed, VFK have increased Hewson’s scope to include numerous secondary items, including curtain wall steelwork and roof purlins. Tekla’s ability to model these smaller items, as well as the larger heavy civils, has meant that we can maintain a single model including all structural elements. Custom connection components and Kingspan modules have been particularly helpful features in these latter stages. 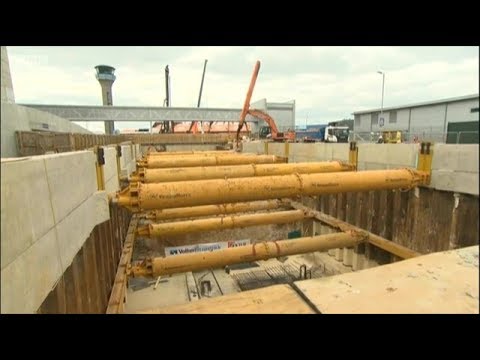