Project scope was to retrofit a 10,760m2 existing warehouse to host a food processing and packaging plant.

A 3D scan was utilized, and over 505 million points taken to capture the objects within the warehouse including structural beams and columns, purlins, existing service pipes and fire water, electrical cable trays, concrete step downs and joints, and precast wall slabs.

Initial 3D scanning showed that the cambers were not added during the construction of the original building causing some rafters to sag over 110mm in the middle and bow in the horizontal axis by up to 35mm. Additional steelwork was immediately supplied to rectify the structural rafters, and then a correction check survey was done to ensure the building moved as intended.

Using the 3D scan, the additional steelwork was modeled using macros/details with pre-positioned layout points to connect the existing steelwork and concrete. All steel lengths between existing rafters were bespoke as no allowance for slotted holes was allowed to the hanging equipment frames and the rafter corrections did not allow for the rectification of the horizontal bowing of steelwork.

Skype for business and DWG imports were utilized alongside Tekla BIMsight and Trimble Connect to bring in the new refrigeration components, aircon ducting, and services to ensure no clashes would occur onsite.

Upon positional sign-off; whilst the 2D drawings were starting to be processed, a team of two spent two days onsite with an RTS unit, laying out over 464 chemset locations for the column baseplates and 1,056 bolt locations to existing steel rafters 13 meters in the air!

Once the steelwork arrived on site, all 3,419 new assemblies fit to the 1,520 site marked holes with millimeter precision and required no site alterations. 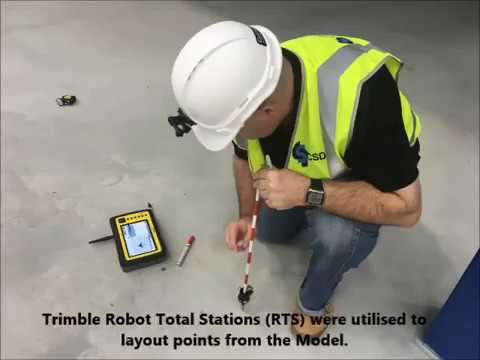