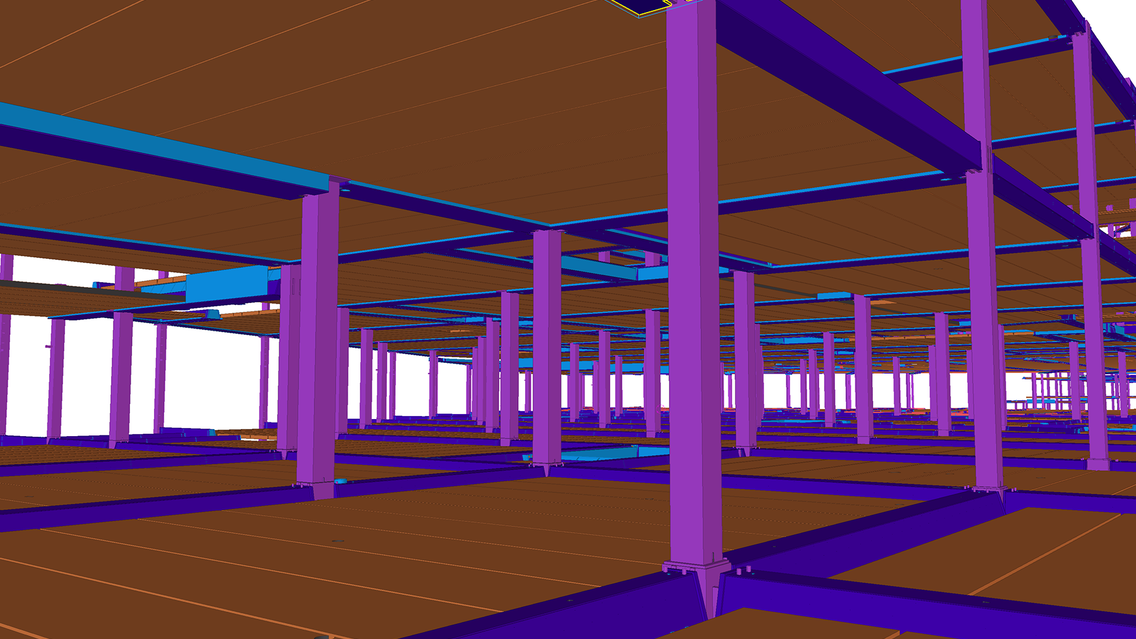 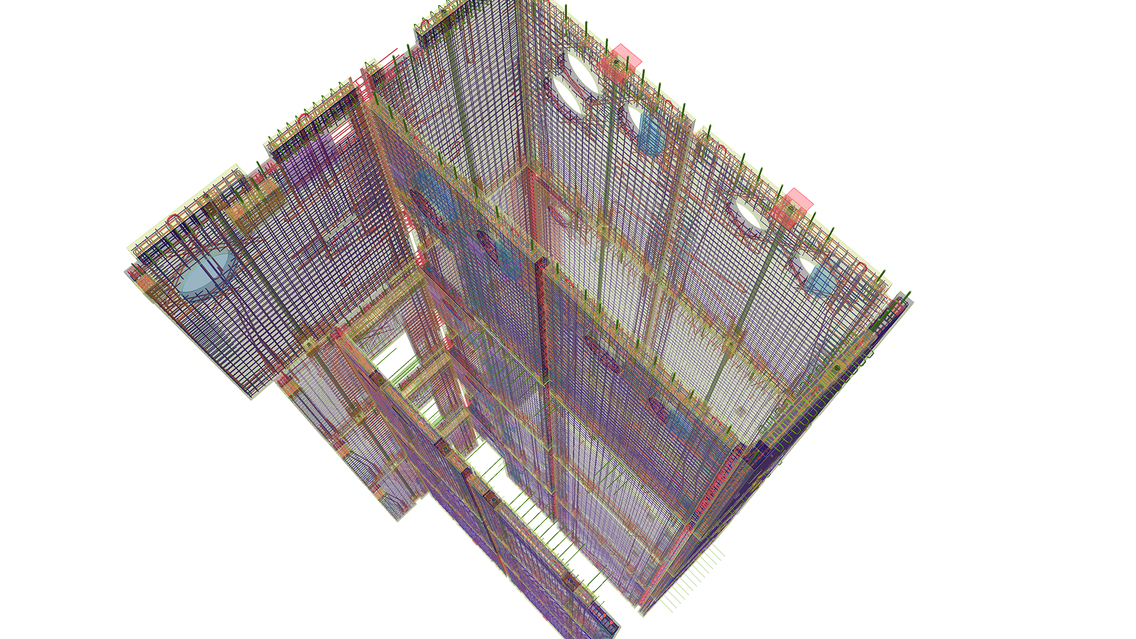 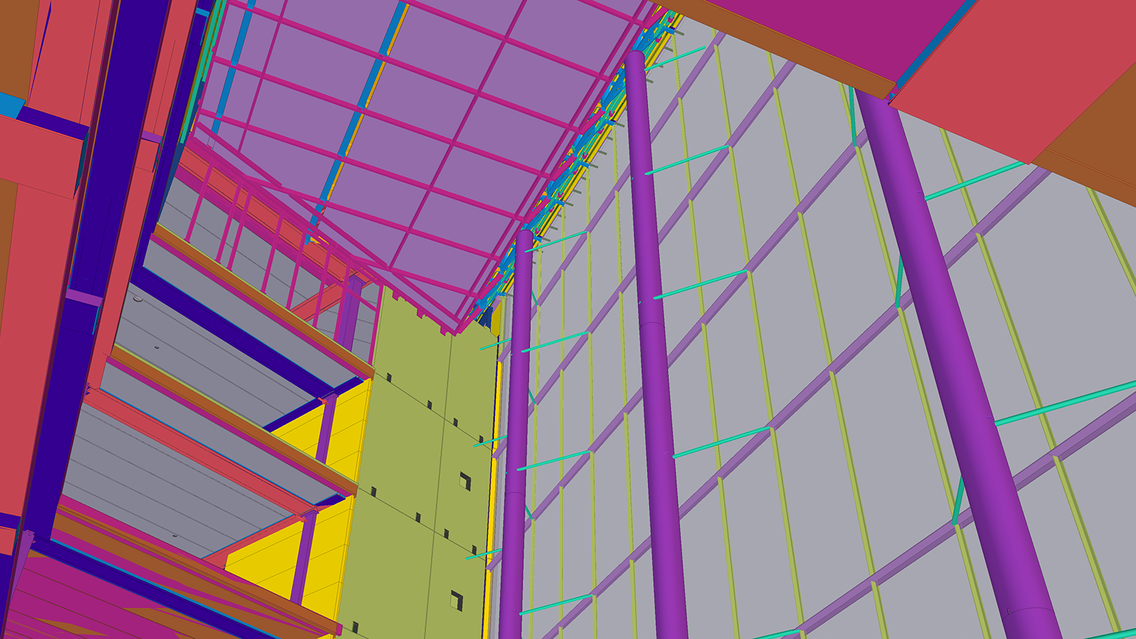 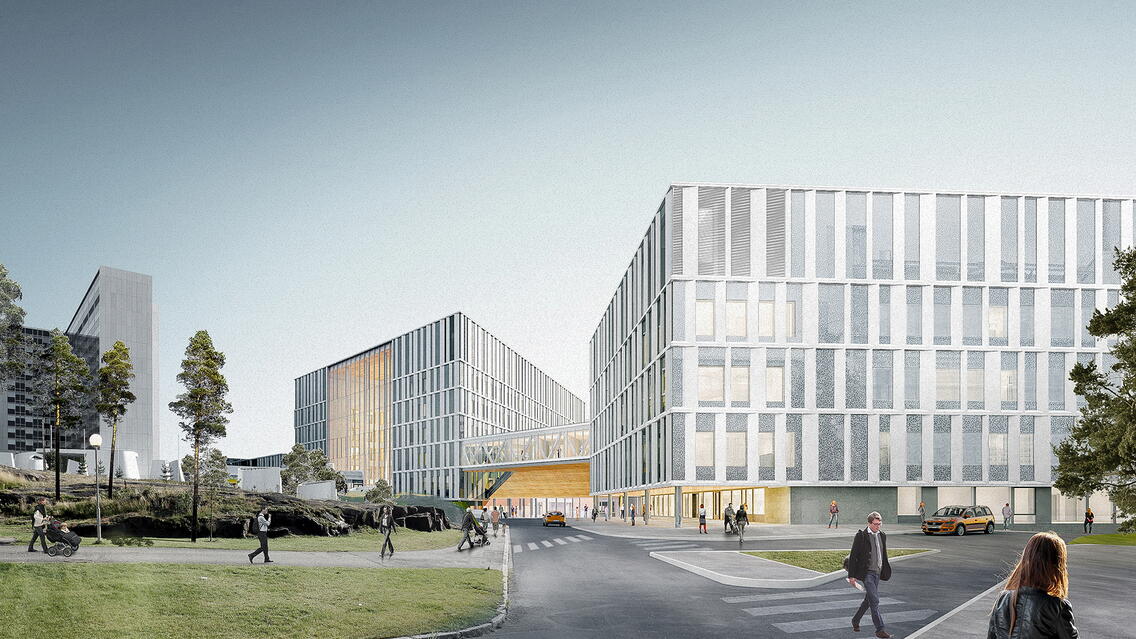 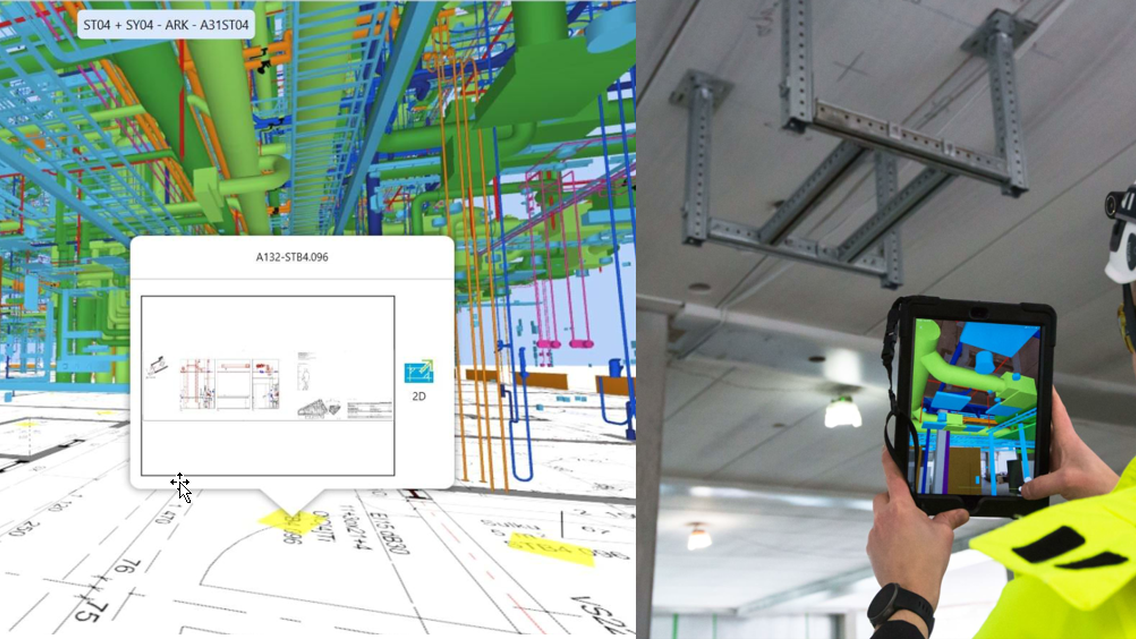 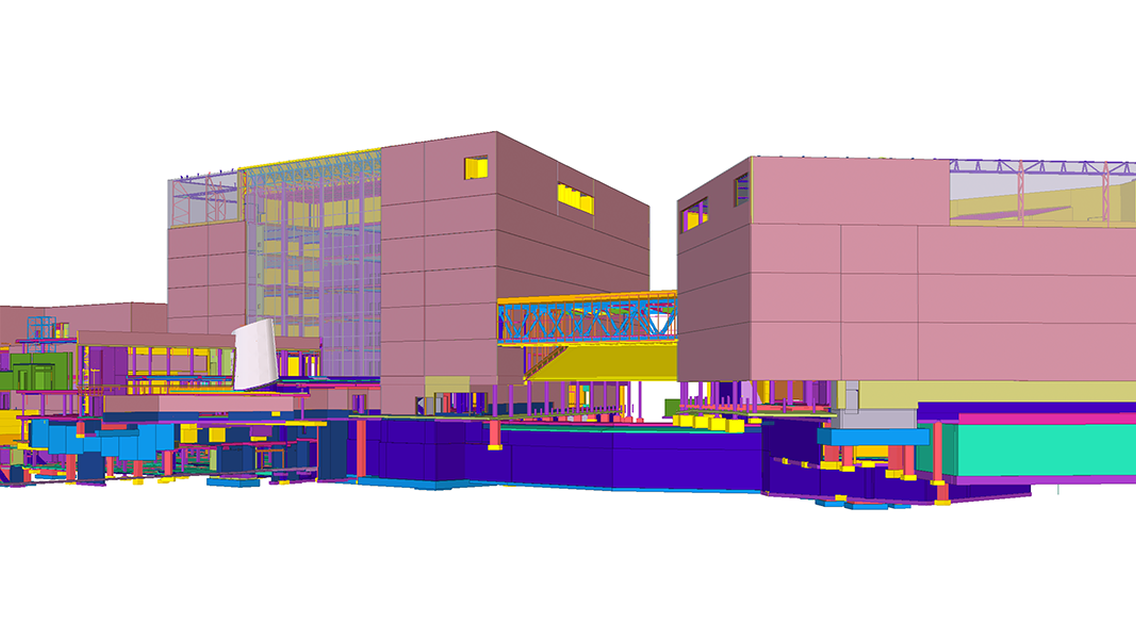 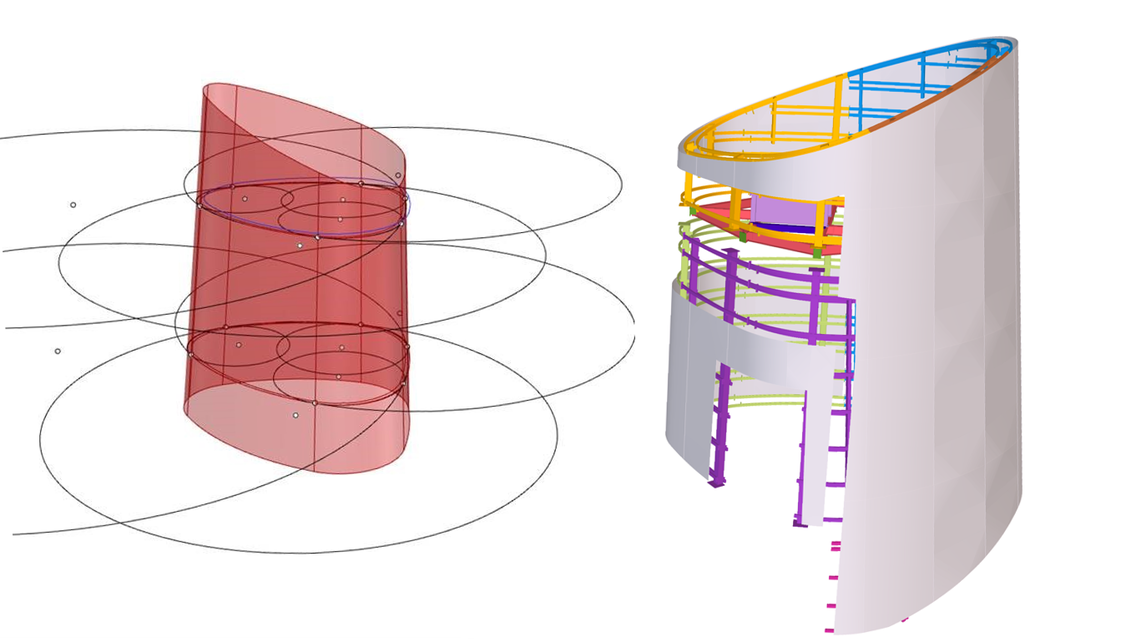 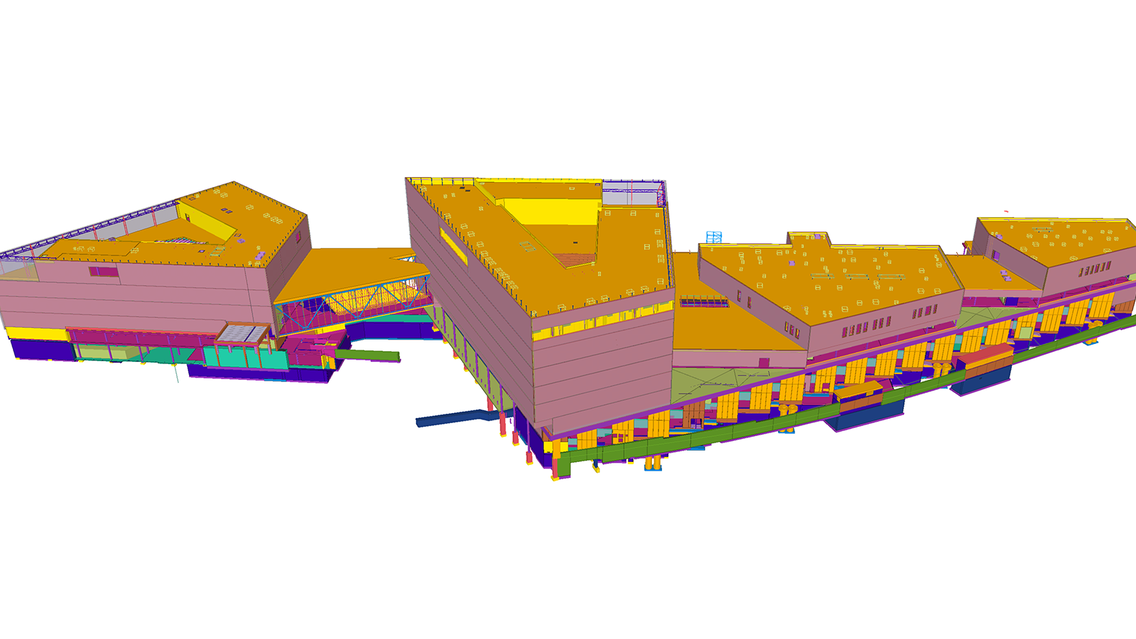 Bridge Hospital built in the Meilahti district of Helsinki is the largest construction project in the history of Helsinki University Hospital (HUS).

Once completed in 2023, it will unite the operations of Töölö and Meilahti hospitals into one consistent unit. The HUS Bridge Hospital and three (3) linear accelerators' project is valued at about 303 million euros, and it's design phase kicked off in 2016. These two encompasses area of circa 71,500 m2 in total and net volume circa 360,000 m3. The project requires more than 8,000 precast units and more than 4,000 tons of steel.

The tallest parts of the hospital are 9 stories high. Its frame will consist of steel and concrete composite columns, Delta beams, and thin-shell slabs installed on top. The facades feature thermo profiles clad with sheet metal and silk-screened glass. The hospital has been named according to a bridge-like part that connects the tower with the inpatient wards to the one-day clinic.

This exceptionally extensive project includes plenty of technically demanding structures for the most critical operations, such as intensive care units, operation theaters and X-ray units, the details of which increase the complexity of the models, too. A vast number of design disciplines and subcontractors participate in the project. The lead designer is AINS Group who is also delivering the precast concrete and structural steel designs and detailing, excluding the Delta beams which are detailed and fabricated with the entire load-bearing frame by Peikko.

In terms of structural engineering, the building’s specialties include large glass walls and roofs, post-stressed shaft units, and the demanding geometry of the steel-framed quiet room. For Peikko, the hospital is the largest-ever composite-frame project delivery in Finland.

The location of the hospital poses a challenge for the construction. It is built in a tight, trafficky spot and needs to be connected with existing properties while trying not to disturb their daily operations. For the main contractor, fluent cooperation with designers and subcontractors has been a major success factor in the project.

Throughout the design process, the building information models have played an important role both in coordinating the design disciplines and in visualizing the design solutions to the project parties. Efficient information management has been essential when the project has altogether 16 different fields of planning and 194 submodels. Combination model and information model detections have been done in reasonably sized pieces and relevant parts of subject and parts of building, to find possible clashes. Fire safety doors, for example, have been checked using the software. Design alternatives have been presented in Big Room meetings and by using VR glasses to the end users.

Structural design is implemented using Tekla Model Sharing, with about 50 designers working on the model during the project. Peikko designed the Delta beams for the same shared model, and many models from other design disciplines and building component suppliers, such as partition walls and facade elements, have been imported in IFC format. More uncommon examples include the models of elevator shafts and laundry and garbage chutes.

BIM was utilized in scheduling the building frame. On the ward floors that include many repetitive rooms, indoor schedules are managed using a paced schedule which is imported in the models. In addition, the Last Planner method is utilized in the project. Modeled designs have been useful in coordinating installations, checking for clashes, and creating site layout plans, and mobile also on the site. A comprehensive, constantly updated Dalux mobile model helps about 100 workers on site every day. The Dalux combination model has been enriched in many ways to make it an easy and visual aid for various user groups.

Connecting with existing structures is another challenge in the project. One floor involves several hundreds of meters of connecting surfaces with the old hospital building which has been modeled based on as-built measuring to help coordinate the structures. In addition, hospital fixture procurement will be decided on in a later phase, so structural design has needed to prepare for various alternative solutions.

The schedule of precast concrete design is particularly tight, but its management and reporting came through based on the Tekla model thanks to the project and timetable tools developed at AINS Group. The contractor’s suggestions were imported to the model, and the tools were implemented to schedule monitoring per status data and linked working-hour and resource information.

The design of precast concrete units and steel assemblies accuracy came through by matching the structural model with the building component suppliers, subcontractors, architects, MEP and hospital equipment designers’ designs. Automation provided by Tekla was utilized effectively in detailing the fixings and producing drawings, for example. Tekla Detail Manager was utilized in precast concrete design in particular, and time was spent in the beginning of the project to develop custom drawing templates for
Dimensioning Rules, for example. Plenty of standard components and tools were used for steel detailing, for example to fix and detail composite columns, to create connections for columns and Delta beams, and to model the HVAC utility room, glass roofs and care units.The Grasshopper-Tekla Live Link turned out essential in modeling the geometrically challenging quiet room. Tekla Model Sharing has played a key role in cooperation and sharing the model information between Peikko’s Delta beam design and AINSs’ coordination in general.

In general, the project involved exceptionally detailed modeling. For example, the room charts were created almost solely by modeling. All building service systems including UI terminals and electric outlets and furniture were modeled and thereby included in the projections. Architectural design has utilized MEP and structural design models as reference, meaning that the architectural model has been enriched in ways not possible before. Strong connection between design and the construction site required all model-using parties to understand and constantly communicate the status of the design models. Construction site safety has been successful: no serious accidents have occurred on site.

Would you like to find out more about how Tekla software can help your structural engineering projects? Click here