Hotel Gradienten in Jönköping, Sweden, developed by Skanska Sweden is scheduled to be completed in the first quarter of 2021.

The hotel will feature 18 stories with 229 hotel rooms. Totaling circa 12,300 m2, the property will also offer conference space, a restaurant and 2 floors of underground parking with more than 110 parking spaces. The construction contract is worth nearly 38 million euros. Construction began in the first quarter of 2018, and Nordic Choice Hotels has signed a 20-year lease for the operation of the hotel after the building has been completed.

Due to the building’s height and thin prefabricated walls (200 mm and 250 mm), its structural design and construction involved many challenges. The height of the building causes tension and shearing forces on the foundation and between the wall units. Other challenges include complicated curved geometry in the hotel area, high forces from traffic, and earth pressure on the parking floors. These factors caused the need to design many non-standard parts and solutions, make many changes to the design, and to coordinate among the project parties. Another challenge was working with several factories at the same time. Steel structures were fabricated at Litana ir Ko’s factory and precast concrete units at several different suppliers.

The project requires 536 tons of steel, hundreds of reinforced precast units, including wall elements and hollow-core slabs, and more than 26,000 drawings in total, as well as many reports and specifications for material ordering and delivery to construction site or factories. More than 86,000 reinforcing bars and more than 1300 reinforcing meshes were designed in the model.

BIM helped design the building with no clashes or other failures

Litana ir Ko provided the design and construction of the load-bearing structures for the hotel project. Their scope of work included all structural calculations and the design, fabrication, delivery and assembly of the building components on site for both the underground parking and the hotel, excluding foundations. The company used Tekla Structures 2018i default environment. The Tekla model was also used on mobile devices during the project. Trimble Connect will be used with steel fabrication and construction.

In its role as the contractor, Litana ir Ko provided the QTO for estimation and sales and pour sequencing, reinforcing bar coordination, material QTO, field layout and progress and cost monitoring by using BIM. In the model, the company used many Peikko embeds and components, Halfen cast-in channels, some warehouse components and some custom components for 3rd party custom parts, such as couplers and lifting loops. In addition to QTOs, object data was taken from the model to production planning, material optimization, casting table planning, delivery planning and scheduling, for example. Custom reports with steel elements were uploaded to the company’s own file sharing system which automatically translated values from reports to weight values for the system. NC files for plasma cutting were exported to FastNest software and rebar meshes to the Unitechnik system on request of the factory.

The Tekla model was used for communication purposes in all phases of the project. Most reference models were imported in IFC format. The IFC files were used for design and detailing by all disciplines and uploaded at least once a week on the client’s server. These models served the project every week during online meetings to solve design and other issues. Some reference data was used in 2D DWG format. Software products used by other parties include Revit, MagiCad, AutoCAD, NavisWorks Manage, and ArchiCAD. Sofistik software was used for analysis and design. Some joints and reinforcement maps were detailed with Scia Engineer and some joints with Idea StatiCa. Column shoes and welding plates were created with Peikko Designer and specific bars or locations with Hilti Profis Anchor. Excel sheets were also in use for calculations. 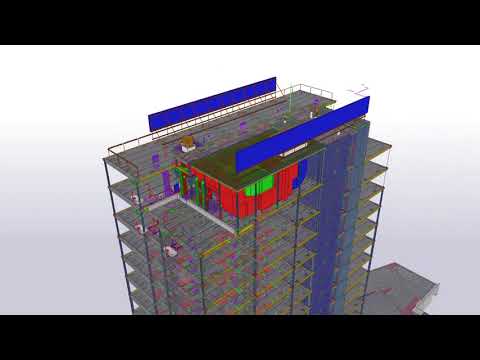