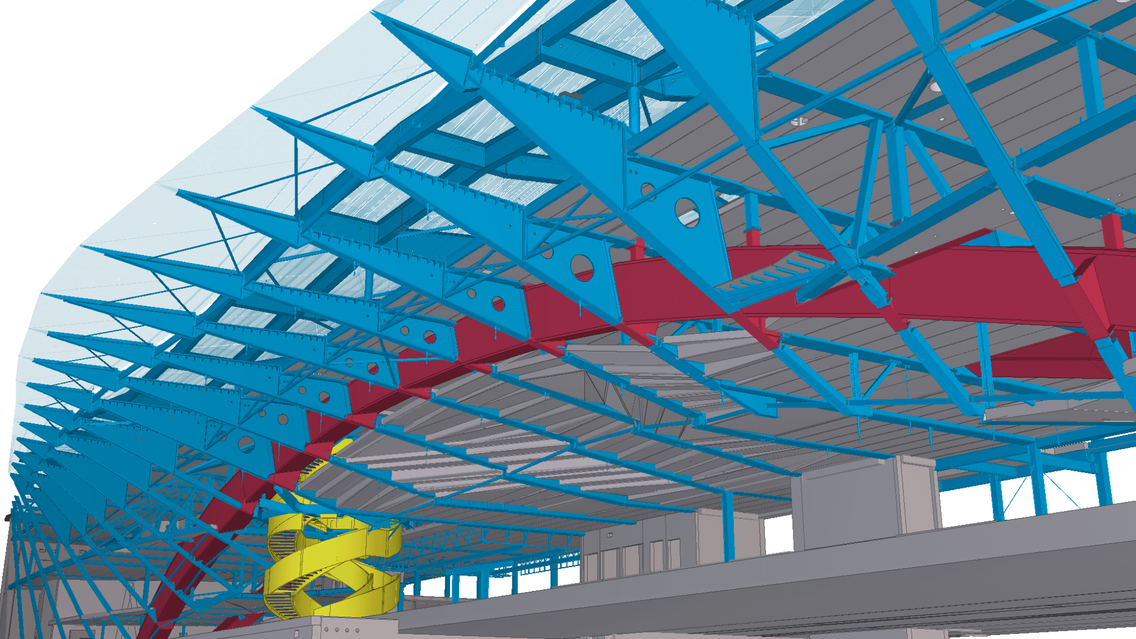 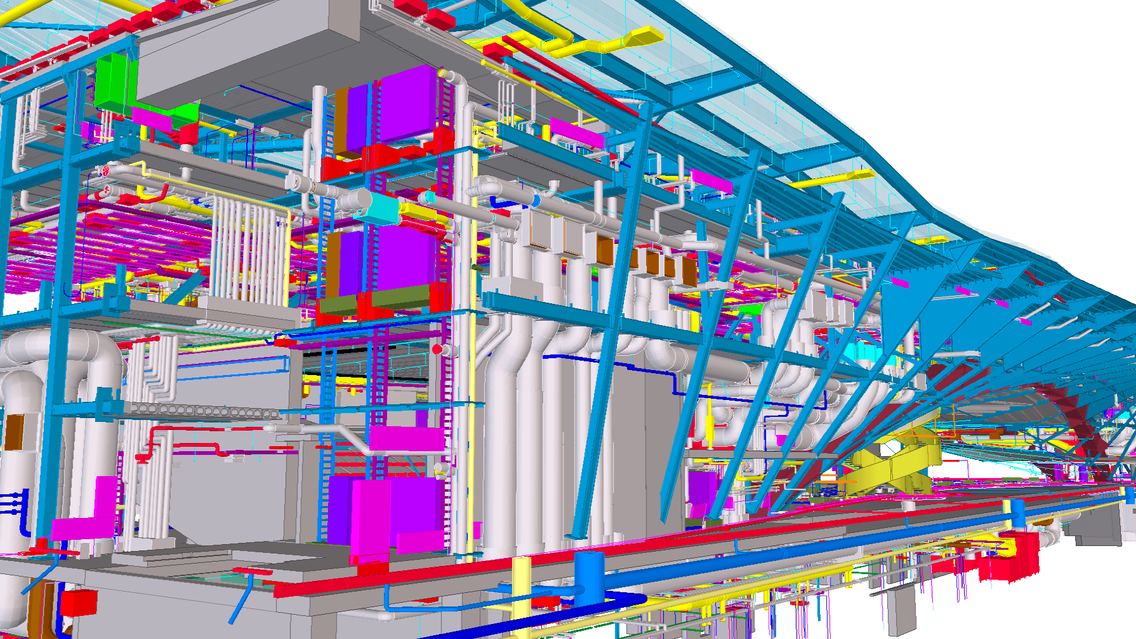 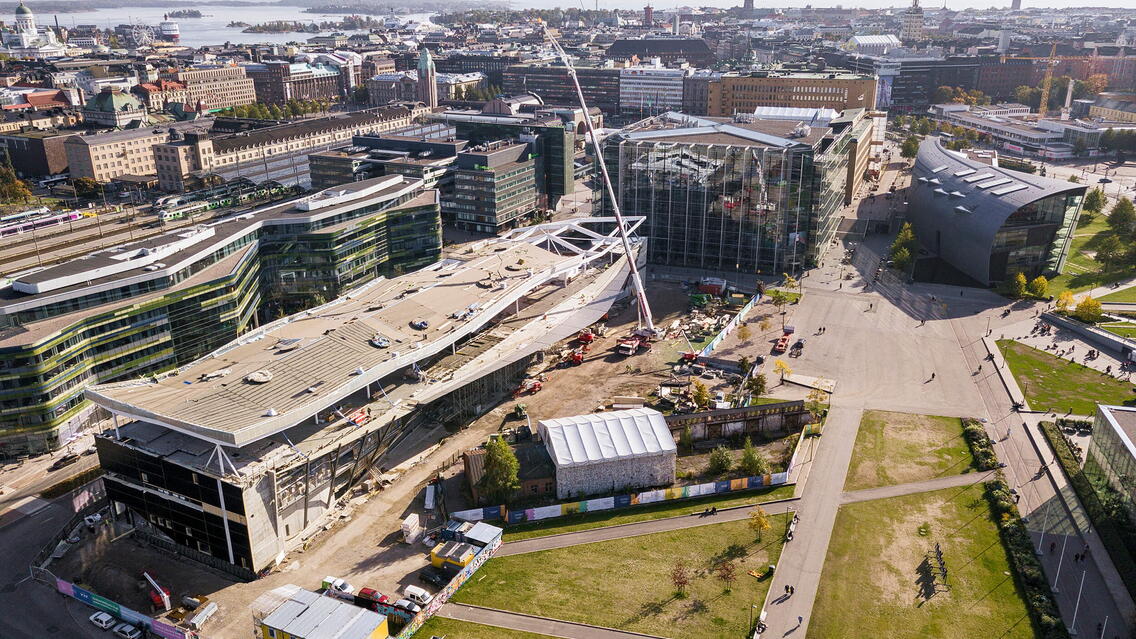 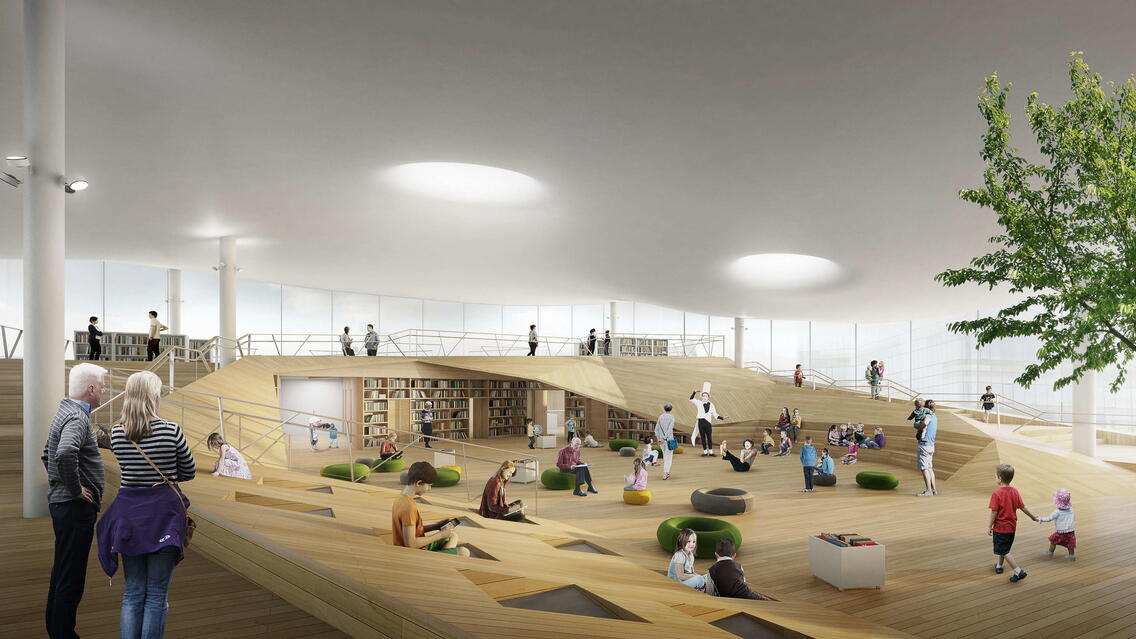 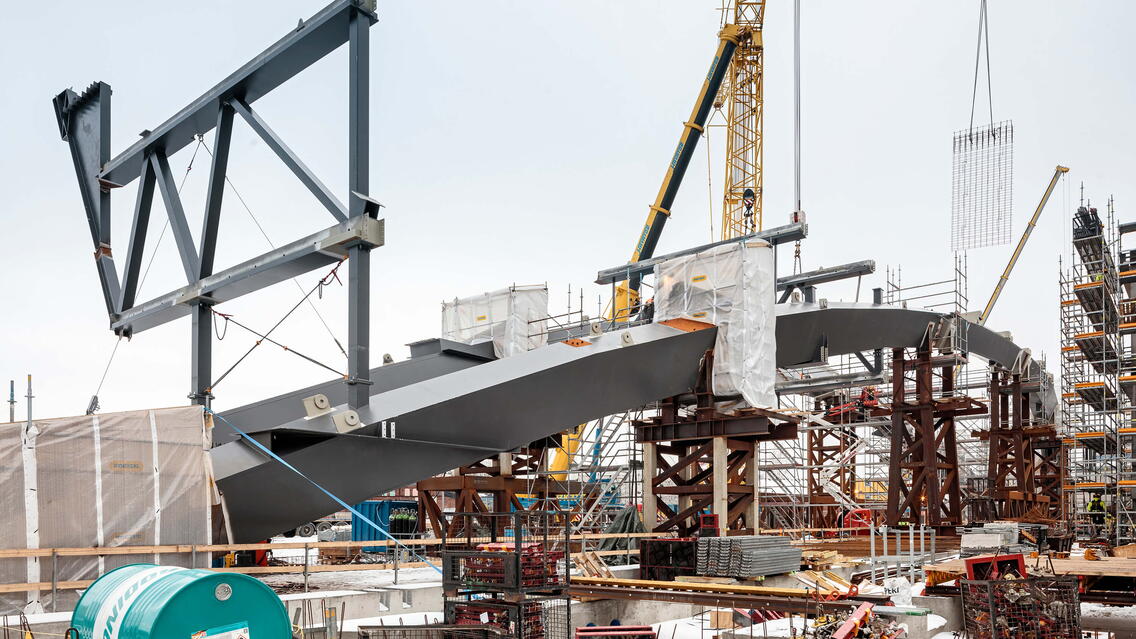 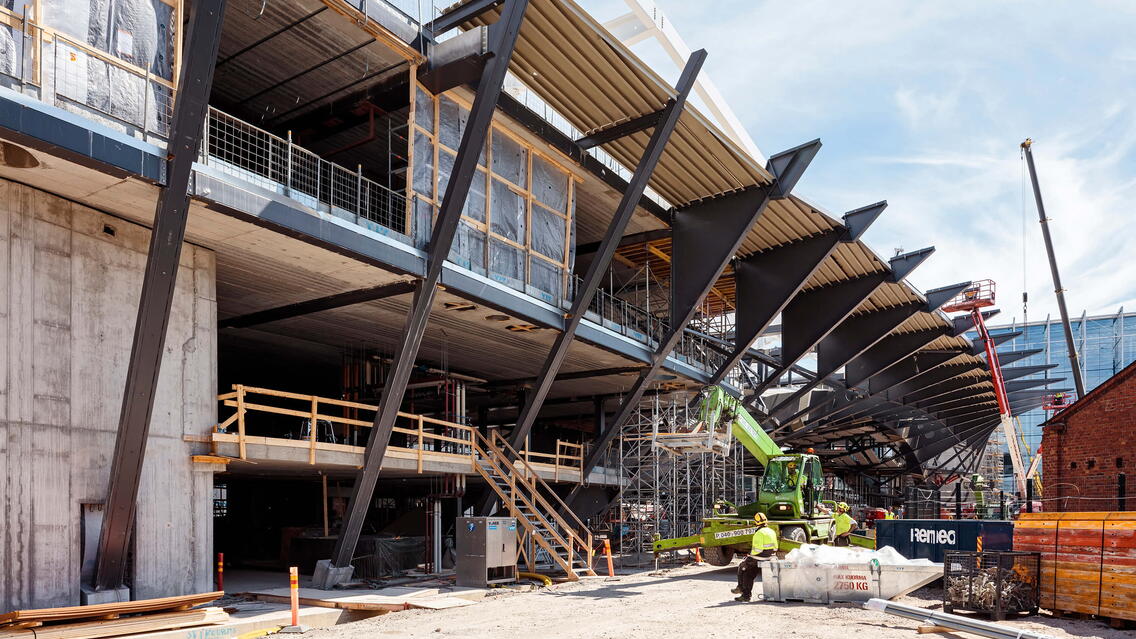 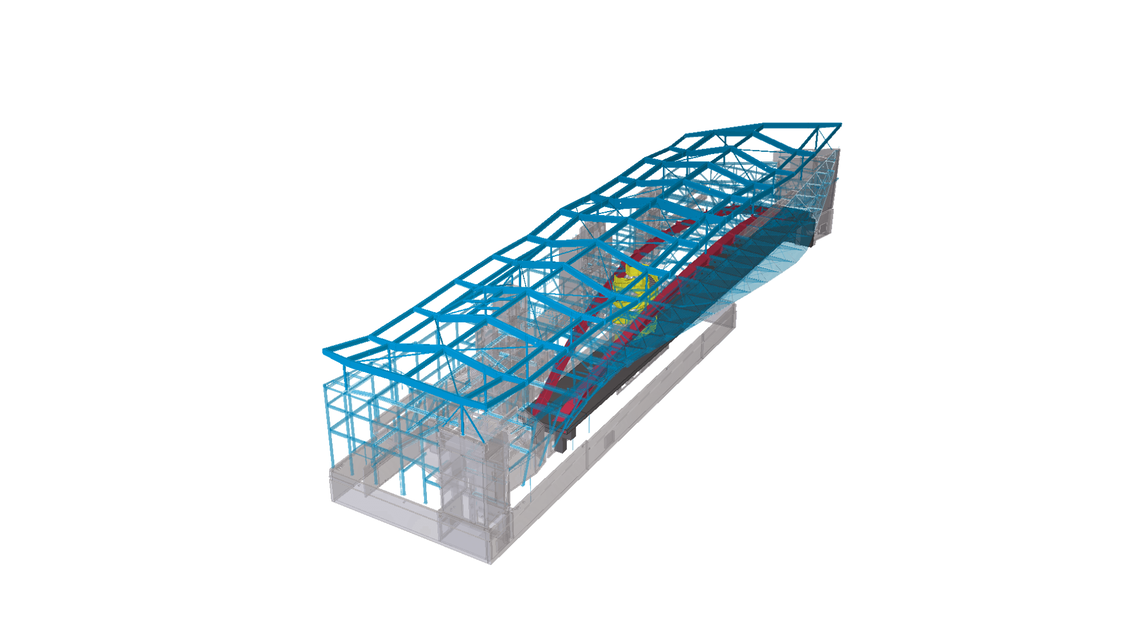 The new central library of Helsinki called Oodi (Ode) is a library for modern times, open to all, a non-commercial public space in the pulsing heart of the capital city. Five storeys tall, it provides premises to work and organize events, reading havens, studios, urban workshops, a family-oriented library, cafeteria, restaurant and cinema. The new library concept is to reinforce citizenship and advance participatory democracy by supporting communality, innovation and travel. Its construction budget is 98 MEUR. Oodi is to open in December 2018.

The outer shell of the building is made of wood, except for a few glass structures. This spearhead project of 17,062 gsm has gained plenty of publicity and wants to demonstrate that Finnish wood is applicable as a facade material in a public building. Coordinating facade appearance, fire safety, maintenance access and ambitious environmental objectives was a challenge to the design team. In the project planning phase, energy objective was set to class A (equal to E-value below 90 kWhE/m2/year). Achieving this requires energy-efficient building services. Energy savings are sought especially with the quality of ventilation and lighting solutions as well as advanced need-based control systems. Wood is an efficient material for the building. In addition, the structures contain 2.4 million kg of steel and 9,200 m3 of concrete.

The architecture of the new library is exceptional. A sculptural piece of wood plays the main role, and the floors have been placed under, inside and over it. Modeling was utilized in the design of the literature floor’s glass facade to study the indoor climate and thermal radiation transmittance. The main frame consist of two steel arcs spanning more than 100 meters and supporting the floor-high steel grids and beams. The facade and the glass structures are very challenging. A common nominator in this versatile project has been BIM, which has enabled proceeding as planned and predicting what is to come next. Since the very beginning, it has been clear that citizens, the future users of the library, are to participate throughout the project, and thereby the project has utilized virtual models and VR solutions. They have helped evaluate accessibility, measure indoor distances in real-time, and review the 360 degree images of the interiors using ordinary smart phones.

Design management and communication towards the client has been based on BIM since the beginning of the project. The ability to function in a BIM project was one of the criteria when selecting designers. BIM has helped raise project team communication to a new level, and BIM-based visualization has played a key role in implementing the project objectives in design and the completed building. The project has been kept more up to date, and the users’ needs have been reflected in the objectives in a new manner.

Nearly all project parties have been able to import their models to the combination model that also includes as-built measurements as the source data for change management. The building contains very demanding wood, steel, concrete and glass structures, long spans, and very little space for building services technology and frames. Structural solutions were chosen and the structures placed using BIM in order to maintain the versatile geometry. Using an integrated data and calculation model, Ramboll developed a solution for the load-bearing structures that enabled realizing the architect’s vision. Without an extensive combination model it would have been difficult to make reservations for the building services installations considering the challenging form of the building and the structures supporting it. Simulating the use profile of the building with the actual premises enabled taking into account its purpose and operation times. On site, the contractors were able to utilize models to aid installations because the designs were properly coordinated before starting construction and because the installations were checked in advance in the model environment.

Another challenge was to make the versatile slab patterns even and installable. With the steel arcs, the challenge was to combine the longitudinal arc structures with the crossing structures and to design the joints in a way that enabled installation of the assemblies on site. Horizontally the arcs have been tied to post-tensioned CIP shafts. The arcs and the projection were modeled including precambering, and the models were used to produce the NC files and shop drawings to present the required local changes. In addition to own weight and payload, the structures needed to consider arc transformation and vibration. This required innovative structural design enabled by the visuality and accuracy of the models. An accurate native Tekla model was created for the double spiral staircase by the request of the steel supplier to utilize in fabrication. The sheets were modeled in order to machine them with the correct geometry.

Challenges related to the dimensioning between the structural and architectural models of load-bearing and reinforced structures have been solved using the models before proceeding to production. Reservations for the building services penetrations were brought on the structures in good time so that a minimum amount needed to be done on site. Continuous coordination and change management of the model enabled building services installations based on the model.

Models also helped create savings regarding the volume and efficiency of the building. The models were used to produce quantities to estimate the costs of the contracts and extra changes. Thanks to accurate modeling, it was possible to extract the quantities for very limited areas to improve their usability.

The design of the wooden facades and ceilings utilized the possibilities of algorithmic design and AI. The indoor climate conditions were modeled based on the architectural model, and the digital print patterns of the third floor glass facade were matched with the coverage specifications using parametric modeling. The structural designer used Tekla Warehouse items, such as formwork accessories. The modeled accessories are automatically included in the shop drawings and lists; they make production more efficient and help plan factory logistics. The items installed on site are easy to position because their location and product data is directly available in the model.

This versatile project is carried out without compromising its architectural integrity by solving the structural and mechanical challenges in cooperation using BIM.

Fabrication and delivery of glass facade elements: Windoor AS