Known as The Glass Works, which is a nod to Barnsley’s industrial heritage – this multi-million-pound regeneration project will revitalise the town’s centre

Phase One saw the construction of a new public library and a revamp of Barnsley Market Hall. Phase Two of the works includes a 13-screen Cinema and a ten-pin Bowling Alley, 100,000 sq ft of new Retail space and more than 25,000 sq ft of cafés and restaurants around a landscaped public square. Phase Two, which is all steel framed, also includes a Multi-Storey Car Park with Rotunda access and is expected to be completed in June 2021. Billington Structures designed and erected steel framing for the entire project – over 5,500t in weight of hot rolled steel, together with metal decking and precast stairs.

The project has a highly complex, multi-level layout and design. Because of the array of uses the upper Cinema levels must accommodate, there is an extensive transfer structure separating the regular Retail grid pattern from the first floor’s bespoke column layout.

A further challenging issue for the design of the Cinema block is a culvert, which crosses the site under the building’s footprint. This has been bridged using a series of transfer trusses, some of which were the height of one full storey. The latter were brought to site in conveniently proportioned welded assemblies. In total in the Cinema structure, there are 9 storey-height trusses between raised “Ground” and First Floor, plus another dozen or so between upper projection levels. These are in addition to the 5 traditional “beam replacement” transfer trusses, which were spanning over the culvert.

As is the case with most cinema’s, acoustic separation is paramount, and Billington Structures worked closely with the Main Contractor’s specialist Acoustician and Design team to ensure that the client’s requirements were met. As with many town or city centre projects, the steel erection programme for this scheme has been undertaken in a tightly sequenced method. This is due to the confined nature of the site and the proximity of the adjacent Leeds-Sheffield railway line along with the existing and operating businesses, including the completed Market Hall, which formed an integral part of Phase One. All the steelwork had to be brought to site in erectable loads, so as not to exceed the capacity of the site’s tower cranes. In addition, the proximity of the railway line meant that any mobile crane positioning, slew radii and maximum member lengths all had to be agreed in advance with the relevant authorities. Delivering the steel to site in manageable loads will also play a key role in the final stages of the Cinema block’s construction programme.

In order to help the follow-on trades get an early start on their work, some of the screen’s internal steelwork such as terracing, which is formed by steel rakers, will be installed at a later date, after the main steel frame is complete. These rakers, and associated infill steel, will be installed by manoeuvring them into the building via the ground floor and then positioning them using block & tackle techniques.

The Bowling Alley foundations had to be set away from the existing building and its foundations, hence all one elevation is cantilevered away from the main column line by approximately 2m. In one corner of the building, the column is actually hung via a system of vertical bracing members, again due to limitations adjacent to the existing structure.

A significant step in floor level at the junction of the Bowling lanes, created challenges with continuity of floor diaphragms, which had to be carefully considered and carefully detailed. An additional interesting feature is the glazed canopy, which covers the boulevard walkway between the Retail areas. The construction utilises large RHS sections, spanning in some cases in excess of 10m, with smaller RHS glazing supports spanning between. The canopy takes support from, effectively, 5 independent structures; movement joints had to be given detailed consideration, to ensure that the movements of the individual structures would not affect the canopy glazing. 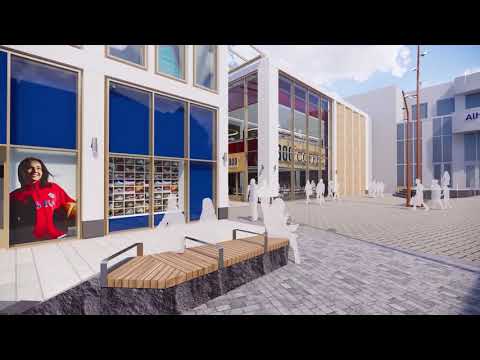