The original New Mexico City International airport created by Foster+Partners, FR-EE and NACO will have a surface area of 743,000m2 (7,997,585 ft2) and will be modeled entirely in Tekla Structures and will represent the largest Tekla model ever created on a global scale. The entire terminal building will be covered by a continuous light space frame that will unify walls and roofs in a fluid design that represents the fluid movement of flight.

With spans as big as 100mt wide (328ft), or three times conventional airport spans, this monumental scale was inspired by Mexican architecture as well as symbolism. The largest interior span is 170mt (558ft) in length.

The light steel and glass space frame that make up the vaulted ceiling has been designed to face the challenging soil conditions in Mexico City. It will be made of a unique prefabricated system that can be erected quickly and without the need for scaffolding for the erection phase.

All the mechanical installations will feed the building from below. This will free the ceiling of air ducts and will allow the structure to take advantage of the ample sunlight, as well as collect rain water by means of the giant funnel structures, providing shade and directing light into the interior as well as offering incredible views all while creating an enveloping structure that adheres to the strictest thermal and acoustic standards.

The funnel structures are 21 gigantic columns that create a steel tubular curtain wall and whose funicular geometry is derived from the surface of the roof structure and which are designed to support the entire space frame. The funnels are completely welded structures forming a diagonal grate and joined by circular tendrils made up of hollow circular segments. The funnels support the structure’s lateral and gravitational loads and provide great rigidity as well as restrict rotation at the base.

The space frame system was designed to be a contiguous shape covering the entire passenger terminal. This system is designed to be a very economic and efficient structure that covers great spans. It extends in multiple directions reducing the amount of steel required as well as optimizing load calculations. The system also reduces the degree of customized elements significantly thus optimizing fabrication as well as erection by reducing the amount of bracing needed. This system adopts a triangular configuration in two layers (upper and lower) that are connected by diagonal elements. 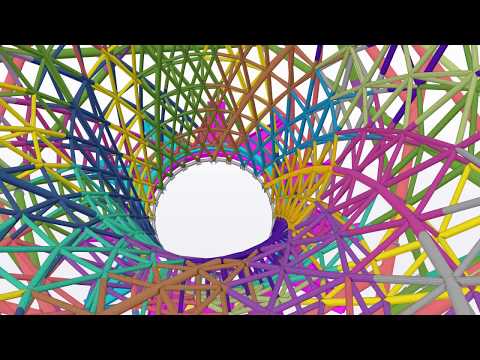