Isolating the wine cellars from the outdoors

The Carapace project is located in the Château Prieuré Marquet, a 15th century monastery located in northern Bordeaux near Saint Emilon.

This project consists of isolating the wine cellars from the outdoors, all while enhancing the Chateau&#39;s architecture, its owner being quite an art lover. Client: SCEA MARQUETTE, Mr. Bernard Canonne Architect: BELUGA STUDIO, Mr. Guillaume Aubel, FUSION Construction is responsible for the framework lot.

The shell is composed as follows:
• An initial framework building encompassing the existing cellar whose two functions are: 1 - isolating and waterproofing the cellar 2 - supporting the entire structure forming the shell.
• An additional structure composed of porticos and beams enabling the creation of pillars for the superstructure and exposing the shell's structure.
• A tubular superstructure will provide the definitive shape of multiple facets that will encompass an iridescent, sandwich panel-type insulated siding.

The most complicated aspect of this project was conceiving the superstructure. Management of the joints and points of support for the second building was the key point of this project. Among the most tricky joints was a knot in the roof. Surrounded from 8 points, It actually connects nine supporting beams. As this joint couldn't be directly supported by the structure, we had to make a stiff, suspended shank on which we welded the fasteners of these beams. This technicality required much effort when the structure was assembled. Each side joint blocked three knots in every direction. A precise assembly order was implemented to enable the building to be fully assembled.

How have Tekla Structures and BIM benefited you? What other Trimble tools or software have you used:

BIM provided us with a full model of upcoming construction (framework, building cladding and roofing, large construction) as well as modeling of existing cellars. The Carapace project is a tri-dimensional building that must be 3D drawn in terms of the many blueprints used. Hard copy materials didn't really work for this project. Tekla Structures and Tekla BIMSight enabled coordination with the client and the various contractors. The model was sent ahead of each coordination meeting to enable adjustments. The rigging teams also had computers with the Tekla BIM Sight application to facilitate identification of the beams and confirm their locations.

Number of facets
37 u 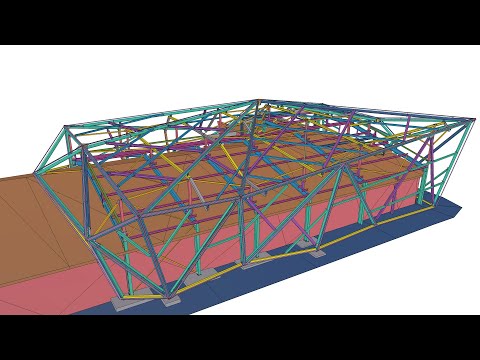