This challenging scheme, located on the site of the old Bretonside bus station in the centre of Plymouth, saw the development of the Drake Circus Leisure Complex, otherwise known as The Barcode due to its striking façade.

The client was British Land who appointed McLaren as the main contractor, working alongside architects Corstorphine + Wright and structural and civil engineers Evolve to deliver the project.

The structure, featuring a complex steelwork frame measuring 130m by 50m in plan, forms a real landmark for the city. With 5505 tonnes of steelwork amounting to 32.5km in length, a total of 7010 main structural steel members were used. The scope of the proposed works included the demolition of the existing bus station facilities and the construction of the new steel framed building. Works to improve the existing viaduct were included alongside the diversion of a South West Water main to facilitate construction. A 1.8m diameter brick sewer running across the site was to be built over, with the steel frame solution able to span over avoiding load surcharging. The steel frame also helped to address the constraints of a complex site, bounded on three sides and with a level difference of over 3m.

The development included the construction of a 12-screen cinema containing the UK’s third largest IMAX stacked above 13 restaurants, a large indoor golf leisure facility, a sky-bar and several levels of car parking, one of which utilises the existing viaduct undercroft.

Community engagement was a key aspect of this project. A local artist competition was held to find artwork for the feature stairs, a 4m wide steel staircase spanning 9.5m with V column supports. During the project, 20 apprentices and ten work experience placements were employed in various roles to assist with the design and build. In addition, 12 careers events were hosted on site and 25 educational site visits were held to endorse careers within the construction industry.

The grids for the auditoriums, retail units and car parking were pre-defined for their individual efficiencies, resulting in the structural grid changing up the building. This gave rise to a large number of columns unable to span full height through the building and a lack of vertical bays which could be used for lateral stability. Subsequently, vertical braced bays were transferred in several locations. Diaphragm action achieved through the reinforced concrete slab acting compositely with the steel floor beams and the metal deck roof became critical to achieving stability for the building. Architectural requirements resulted in the offset of the vertical bracing in plan with the additional moments due to this offset considered in the column design. Alongside transferred stability bays, the grid changes required the transfer of over 50 columns throughout the building, achieved by adopting plate girders and specialist European deep beam sections. At Ground Floor, exposed feature raking columns also contributed to the stability. Consideration was given to the exposed nature of these columns within such close proximity to the coast, with stringent corrosion protection measures required for a Class C4 environment.

The main frame is supported on shallow pad foundations, founded within the Saltash Formation, with the lower carpark supported on a ground bearing slab. These foundations were designed to resist tensile forces due to uplift by increasing the self-weight of the foundations were necessary to, avoid the need for rock anchors. RC retaining walls were required to the north, east and west sides of the site.

Planning requirements restricted the height of the new cinema building, demanding shallow structural depths throughout. Most notably, the projection levels (with a structural depth of 400mm permissible with bays of over 10m square) and Ground Floor, where car park headroom requirements below restricted the total depth of structure to 545mm. A reduced depth was achieved through utilising composite action of the steel beams with the slab. Where further gains were required, the steel beams were raised to the top of slab with angles to support the metal deck, though this resulted in the loss of composite action. Fabricated sections with wide flanges were also specified to achieve the shallow depth requirements in many instances. At car parking levels, web openings to accommodate services routes within the beam depths were incorporated into the design.

The ’Triangle Building’, a retail unit separate to the main cinema box boasts a complex cantilever arrangement with cantilevers supporting cantilevers to achieve a slim oversailing roof. Future flexibility has been considered, with an allowance for mezzanines to the Ground Floor retail units. Soft spots were also designed into the Ground Floor to allow for future merging of units at different levels.

The sky-bar, supported by a 4m deep truss spanning 25m and weighing 26 tonnes, sits above the IMAX auditorium with views overlooking the harbour. The deep truss solution was required to accommodate the column-free zone of the cinema below.

Design and analysis of the main frame was carried out using Tekla Structural Designer (TSD). This included a comprehensive wind analysis, overall stability analysis and individual member design as well as accidental load analysis. Accidental loading for internal blast loads considered a combination of both member capacity under full bay loading and vertical tying of key element members in the temporary case. In addition to the analysis and design of the main frame under permanent conditions, TSD was used to assess and review the temporary stability of the structure during construction. Tight programme requirements resulted in the erection of the building’s cladding prior to pouring the concrete decks; these concrete decks were crucial to the building’s stability. Working closely with the main contractor, cladding contractor and concrete sub-contractor to establish suitable phasing of all components, the analysis eliminated the need for temporary horizontal bracings and kentledge to the foundations. The inherent moment capacity of the steel connections was utilised to gain frame action and transfer lateral loads back to the braced bays in the temporary condition.

An excellent relationship with BHC, the main frame contractors, ensured that a proactive approach to design was adopted which resulted in structurally efficient design solutions and transfer of design information such as connection forces. Evolve also visited BHC’s fabrication factory to see the fabrication process and inspect the sky-bar truss.

This project would not have been the success it was without the use of BIM and Tekla. The complexities of the geometry and the stability system could be analysed globally with numerous iterations undertaken easily to give quick advice to the design team. Furthermore, coordination in 3D was a necessity and this project could not have been delivered to the standard it was through a 2D approach. 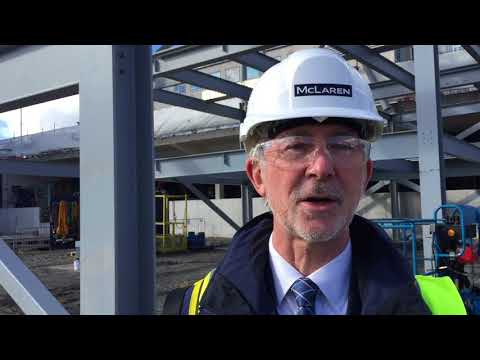