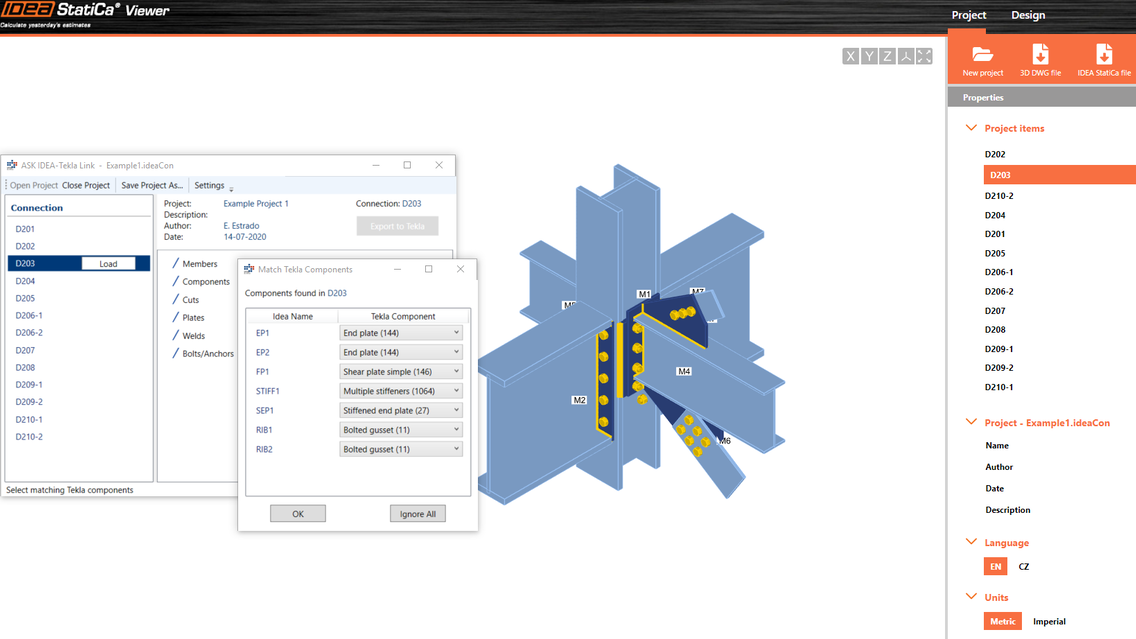 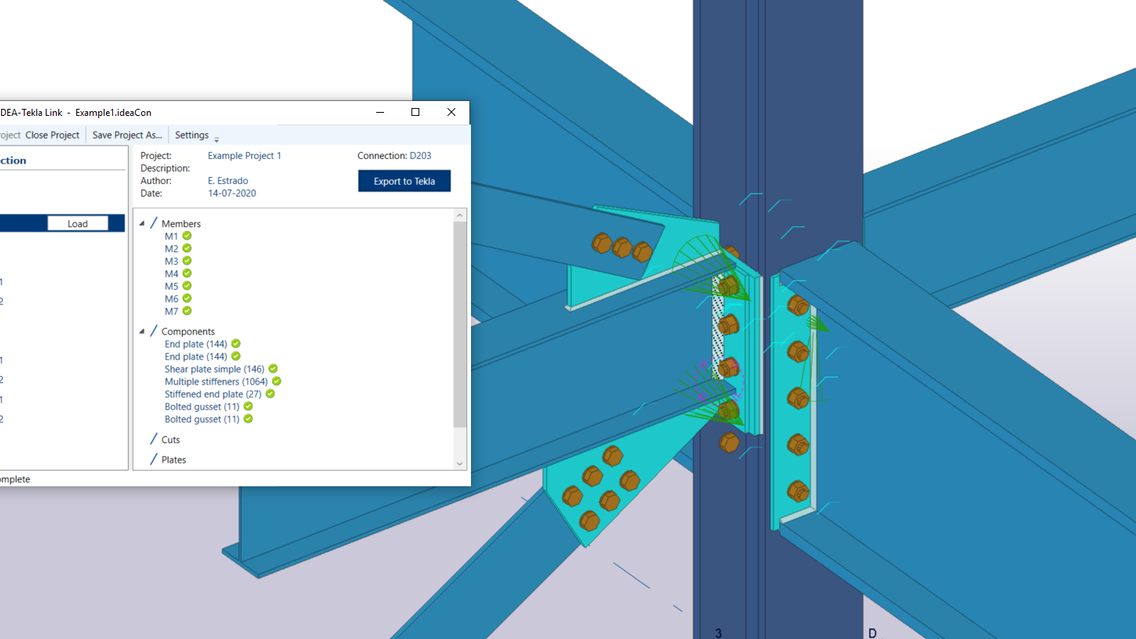 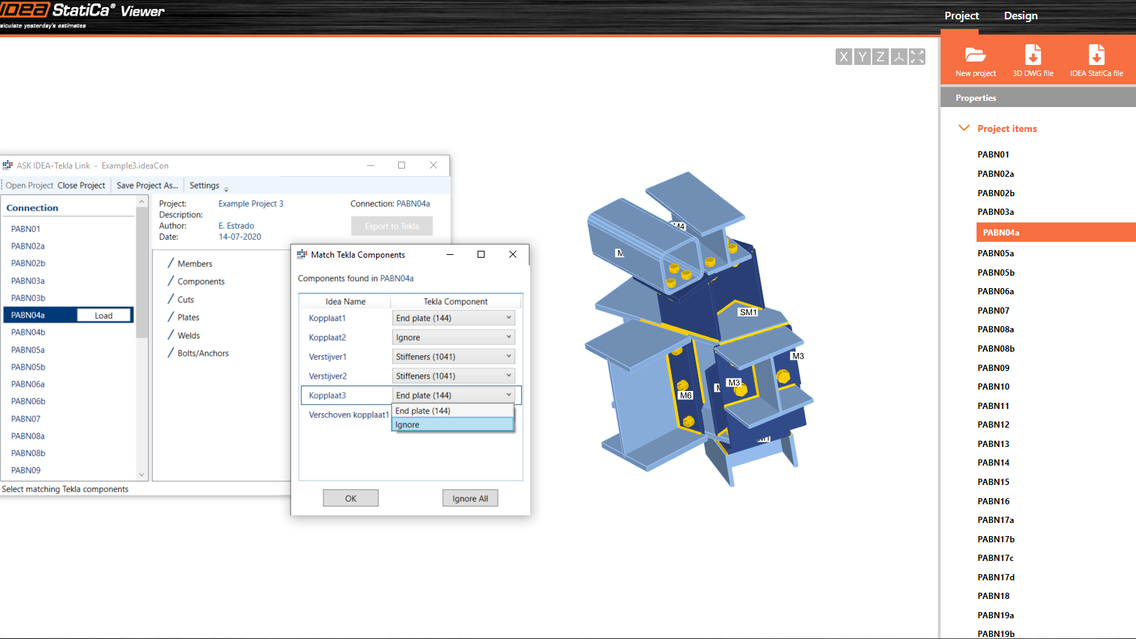 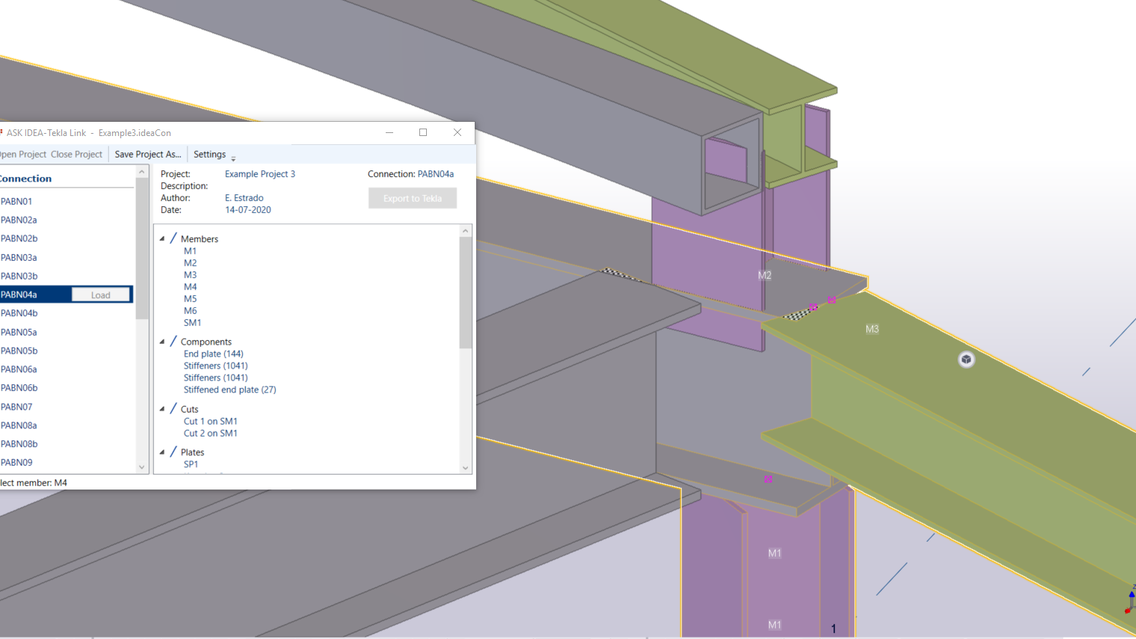 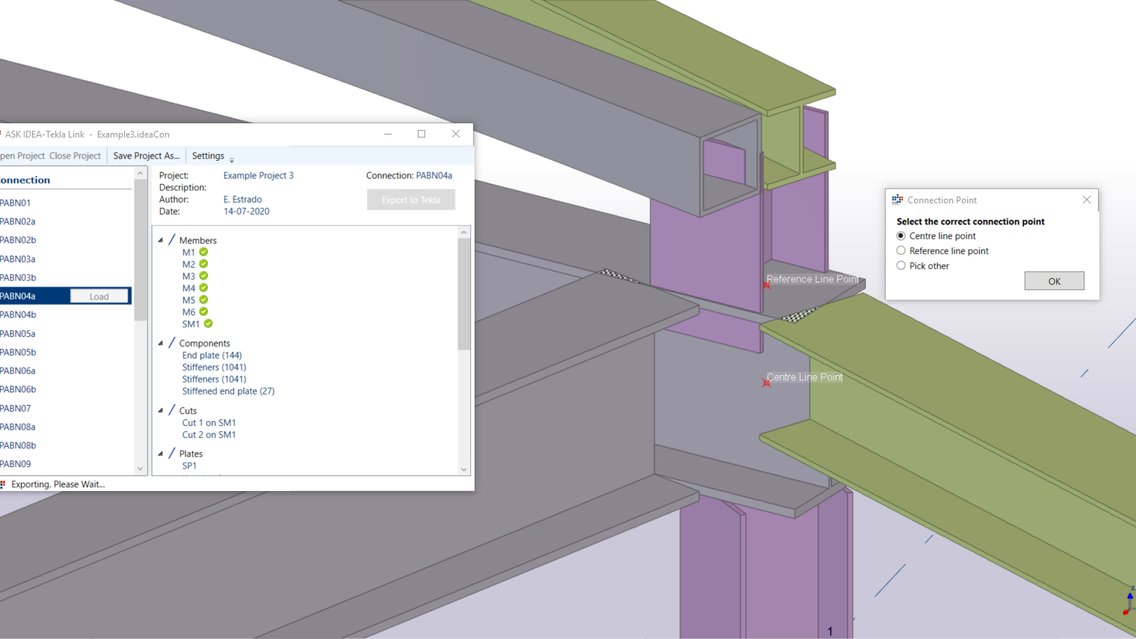 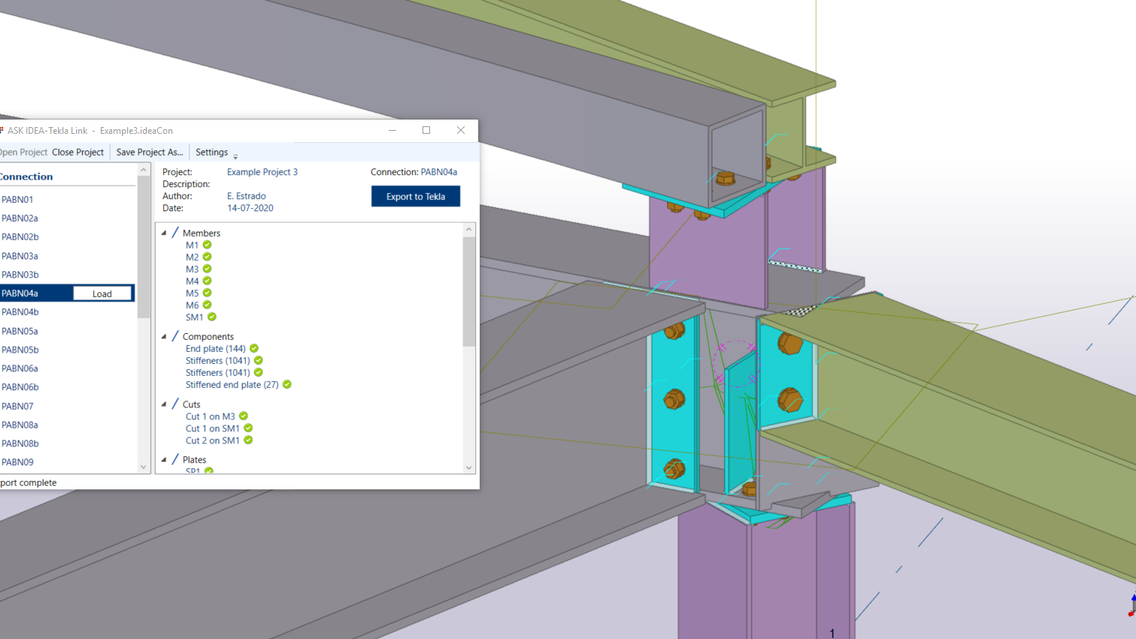 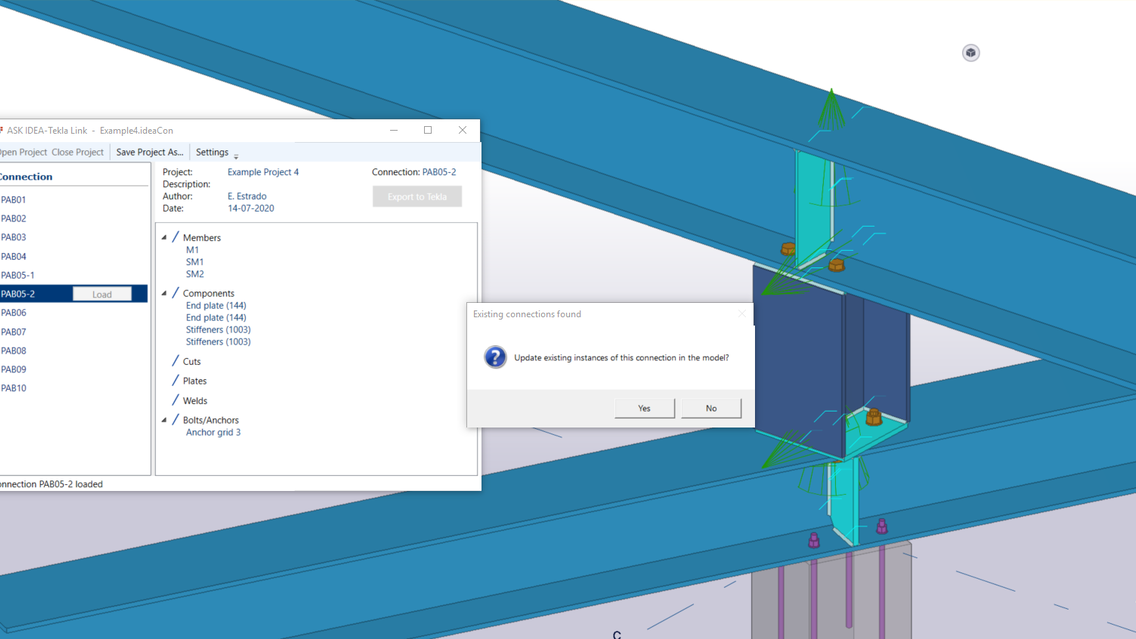 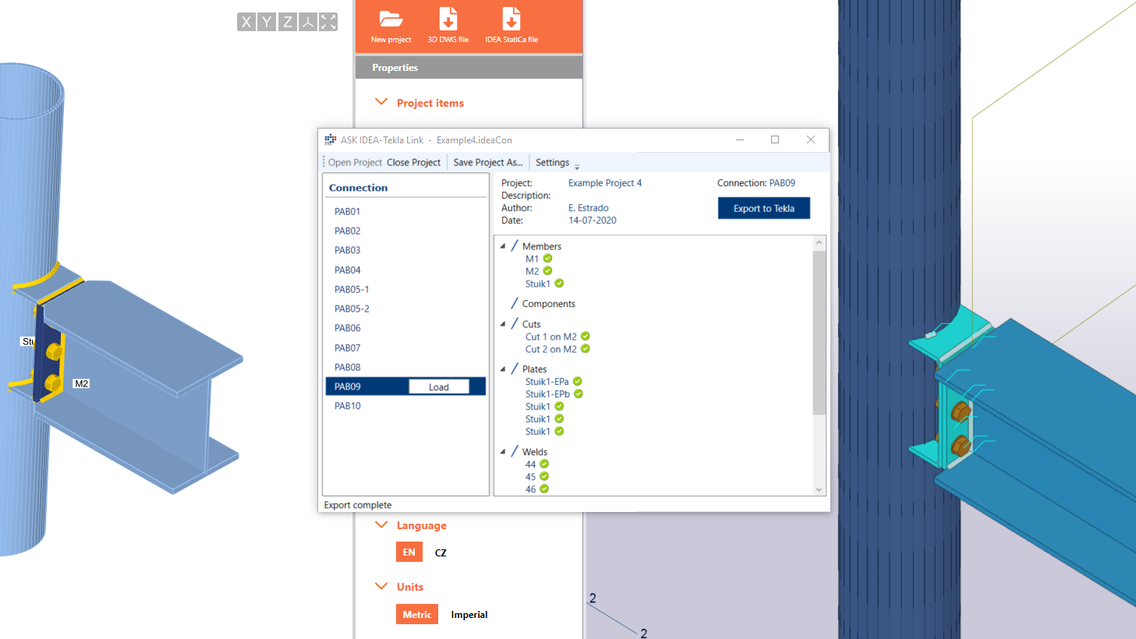 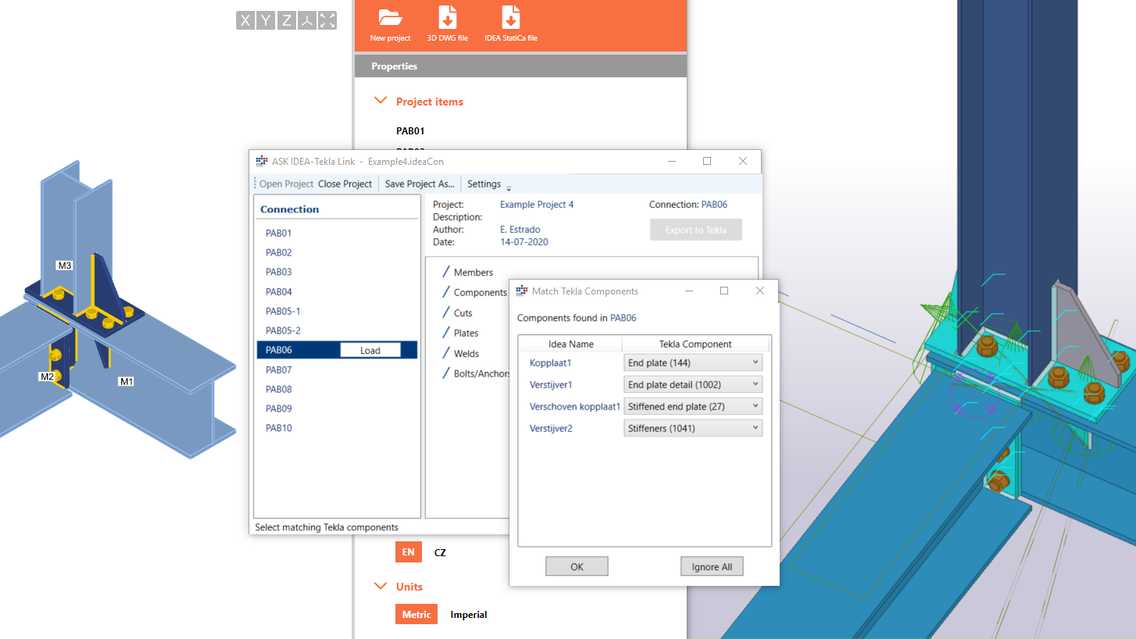 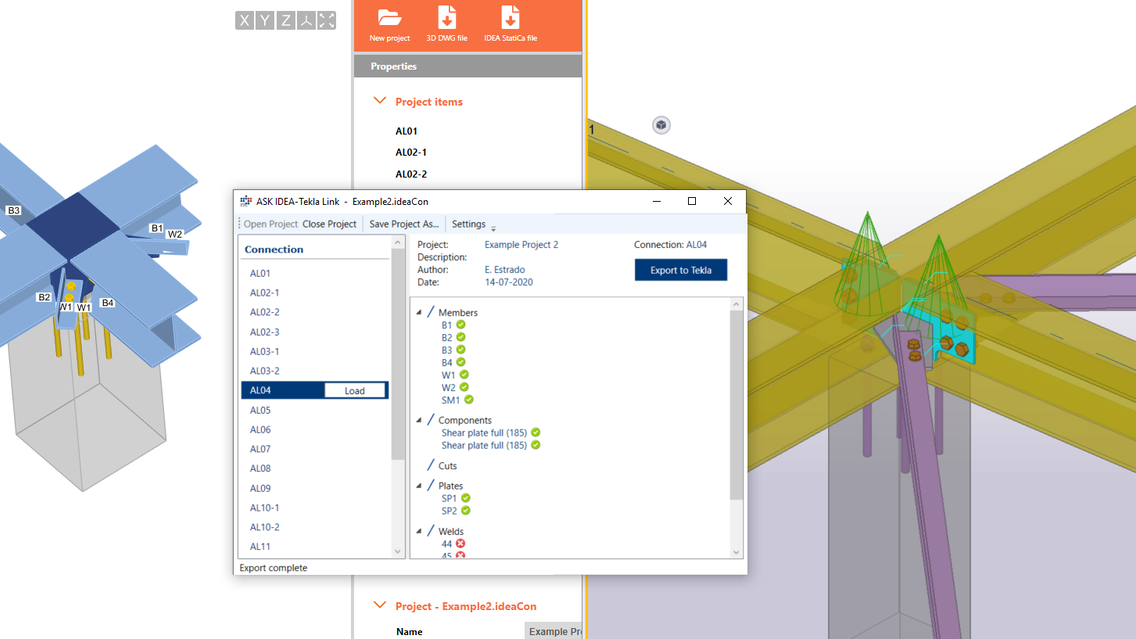 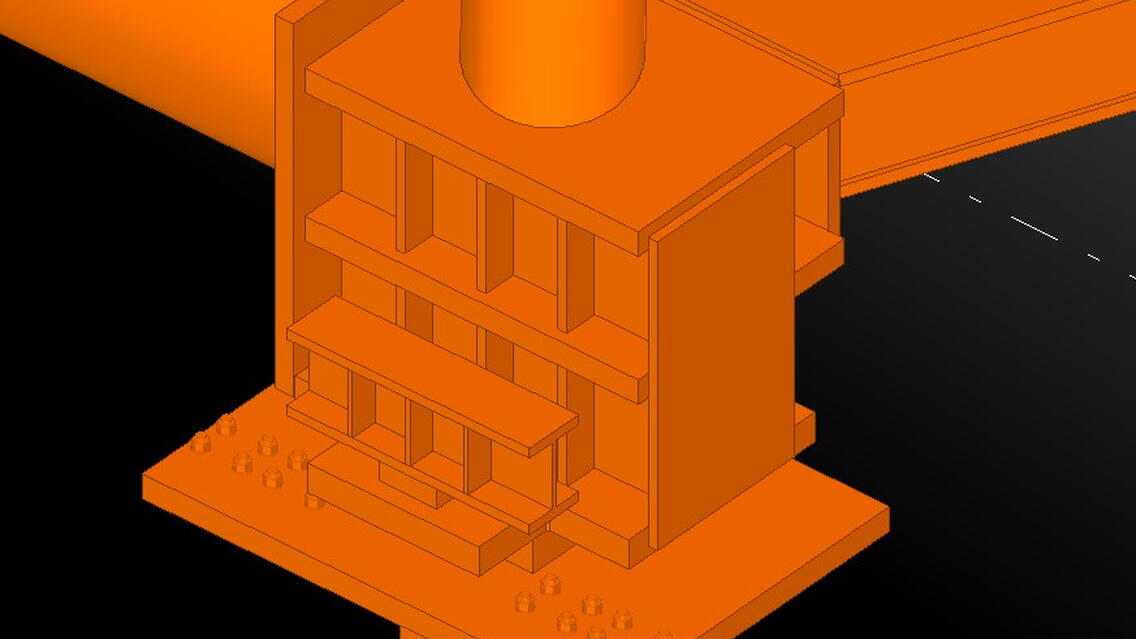 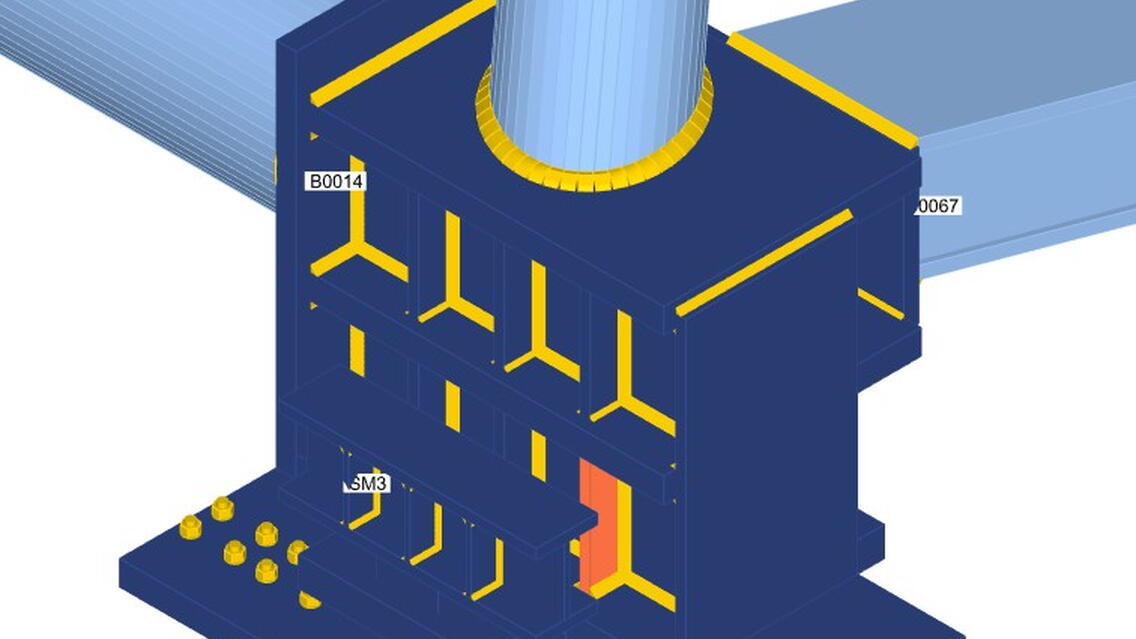 The ASK Idea-Tekla Link is an application developed for internal use in the ASK Romein group of companies. Making use of both the Tekla Open API and the IDEA OpenModel API, it allows for the export of steel connections designed in IDEA StatiCa to their desired location in a Tekla Structures model.

Elements from IDEA StatiCa, such as plates, bolts, welds, cuts, and anchors are exported to Tekla Structures either as components or as the individual corresponding model objects.

The user opens the IdeaCon file in the application and loads the data of a connection. The app then reads the data and tries to match the operations in the IDEA connection file to standard Tekla components.

Whether as a component or model objects the placed connection will have the correct sizes, thicknesses, material quality, bolt spacing, and other properties as defined in IDEA StatiCa. Thus, in most cases, few to no final adjustments are needed after export.

Finally, the application displays the result of the export with a green check if successful or a red X if there was an error and the reason for that error.

The ASK IDEA-Tekla Link is also able to update previously placed connections. If a new file is opened with the same connection name the app can update all connections of that name present in the model with the new data.

Thus, this first of its kind application greatly reduces the time taken in the engineering process as now connections can be exported and updated quickly and accurately with only minor final adjustments and checks to be made. Simple repetitive connections can be placed with a few clicks and highly complex connections are more accurately placed since data is read directly from the IDEA connection file.

The application was developed in close collaboration with the engineering department at Oostingh as well as the other ASK Romein companies. Their feedback as users greatly influenced the design of the application and addition of new features. Throughout its development, it was tested on many of our projects ranging from the standard to very complex and was shown to perform very well with only minor adjustments needed in most cases.

It is now in use on new projects and shows promising results in time savings and accuracy and good feedback from the users. It will continue to be updated and improved as it is used more widely in the company.

At ASK Romein we are constantly looking for ways to improve our workflow especially by leveraging technology. The desire to export IDEA StatiCa connections to Tekla Structures was high on the list of desires from the engineering department particularly here at Oostingh.

Development of the project took about 9 months by one application engineer at Oostingh. Feedback and testing continuously informed the project through the development process. The tool will continue to be rolled out to the other companies in the ASK network and updated as more feedback is received.

About the company - Oostingh Staalbouw BV

Oostingh Staalbouw, part of the ASK Romein International group, is a renowned steel construction company in the Netherlands. We specialize in complex projects in the higher segments of the steel market. We strive to exceed the expectations of our clients. Our project-oriented organization designs, manufactures, coats and erects steel structures within professional and efficient planning. In our long history, we have built a large and diverse portfolio. Today we construct commercial and industrial projects, power plants, factories, train stations, stadiums, airports, bridges and more.

At Oostingh, BIM is an important part of our work. We have used Tekla Structures in our workflow for many years integrating, not only geometry, but information from fabrication, work preparation, and other departments into the model. This approach has led to Oostingh winning a Tekla BIM award twice.

In recent years we have furthered our Tekla Structures capabilities by use of the Tekla Open API. Now, we have an extensive array of macros, plugins, and apps that allow us to better deliver complex steel projects to our clients. Using the Tekla API allows us to exchange data between other software and the Tekla Structures model to make our workflow more efficient, reduce errors, and to have a truly complete Building Information Model.