Looking to revitalize and update the rich history of billboards in the local area, the city of West Hollywood in Los Angeles approved the Sunset Arts and Advertising Program in April 2019. The Program ushered in a new set of zoning regulations partnerships that will integrate billboards, architecture, public art and entertainment. Sunset Spectacular, at 8775 Sunset Boulevard, is the pilot project for the Program.

The West Hollywood Sunset Spectacular is a multimedia billboard for the 21st century. It is comprised of four giant parts: three outer panels arranged in a triangular pattern, with a ‘tesseract’ nested inside. At 67 feet high, the huge billboard is made from 100 tons of stainless steel, with the east and west-facing outer petals featuring embedded high-resolution LED technology.

The three towering petals surround a pedestrian-accessible central void. Suspended overhead is a sculptural entity that holds and stabilizes the three sides of the billboard.
With an accelerated construction schedule due to commercial considerations, the shop drawing phase was completely eradicated from this project. To achieve this streamlined delivery methodology, we tailored the modeling and electronic approval process for the components required for the billboard.

Rather than producing assembly drawings, part drawings and erection sheets, we utilized the Tekla model to generate STEP files for approval by the architect and engineer. These same STEP files were then utilized by the fabricator to nest, laser-cut and weld the stainless steel plates required to fabricate the super component assemblies. 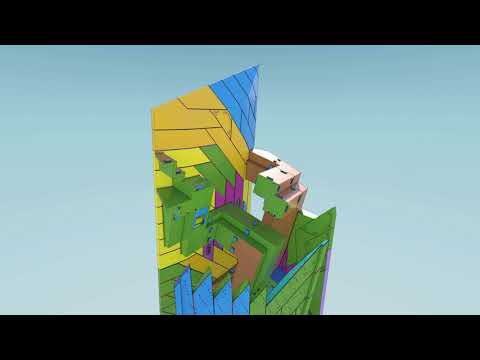