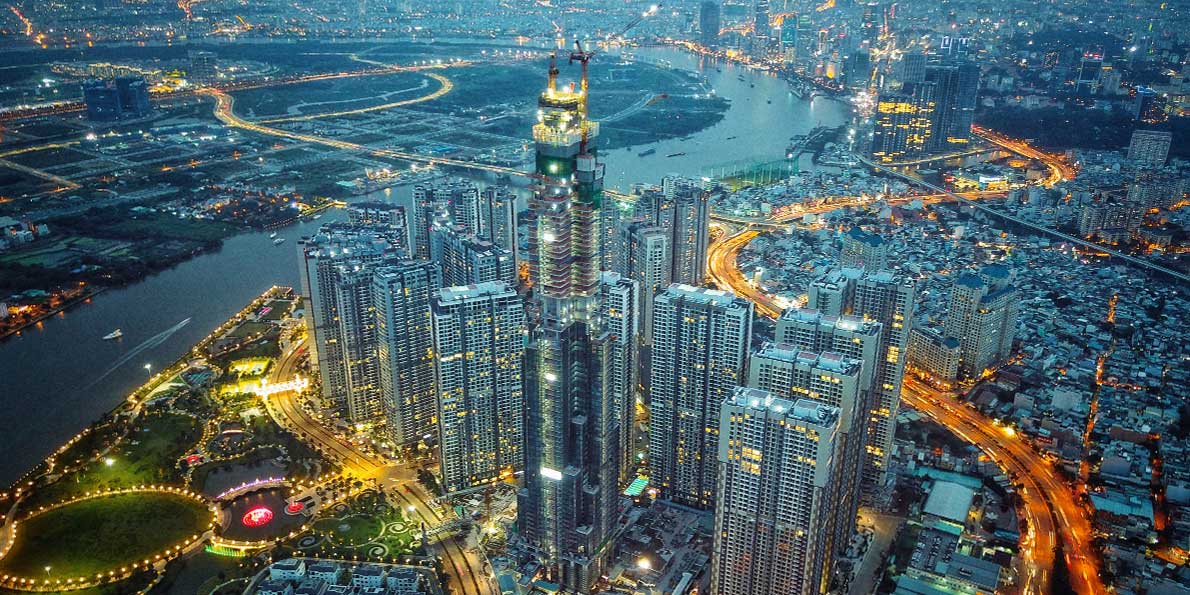 “We used Tekla as it was the ideal choice that provided numerous benefits throughout our BIM process – from precise and flexible rebar detailing, creating and managing 3D models, to vastly improved collaboration throughout the entire construction workflow.”
– Ho Van Thao, Project Director, Coteccons

Established in 2004, Coteccons is one of Vietnam’s largest contractors specializing in sustainable design & build services. Having implemented BIM in 2015, the company went on to win third prize in the 2016 Tekla Asia BIM Awards for their Gold View project. This spurred the company further to establish a team within their BIM department to specialize in applying Tekla solutions for complex buildings, detailing and coordinating precise rebar structures, producing fabrication drawings and creating advanced 3D rebar assembly guides with the model.

In 2018, Coteccons achieved another milestone with the Landmark 81 project, taking 2nd place this time around at the 2018 Tekla Asia BIM Awards. This project has proved the clear benefits of BIM, creating new records in BIM application for Coteccons.

Vinhomes Landmark 81 is situated in Tan Cang, Saigon, and represents the city’s new symbol of prosperity. With 81 stories and 3 basement levels, it is the tallest building in Vietnam and South East Asia, as well as the 14th tallest in the world. Designed by British firm Atkins, the design of this skyscraper was inspired by the image of bamboo – the traditional plant symbolizing strength and unity. This project is a mixed-use development, which aside from luxury apartments and residential facilities, features a 5-star hotel, commercial center, cinema, and indoor skating rink.  With a total height of over 461 meters, it is 8 meters taller than Malaysia’s Petronas Twin Towers, which was previously the tallest in South East Asia. 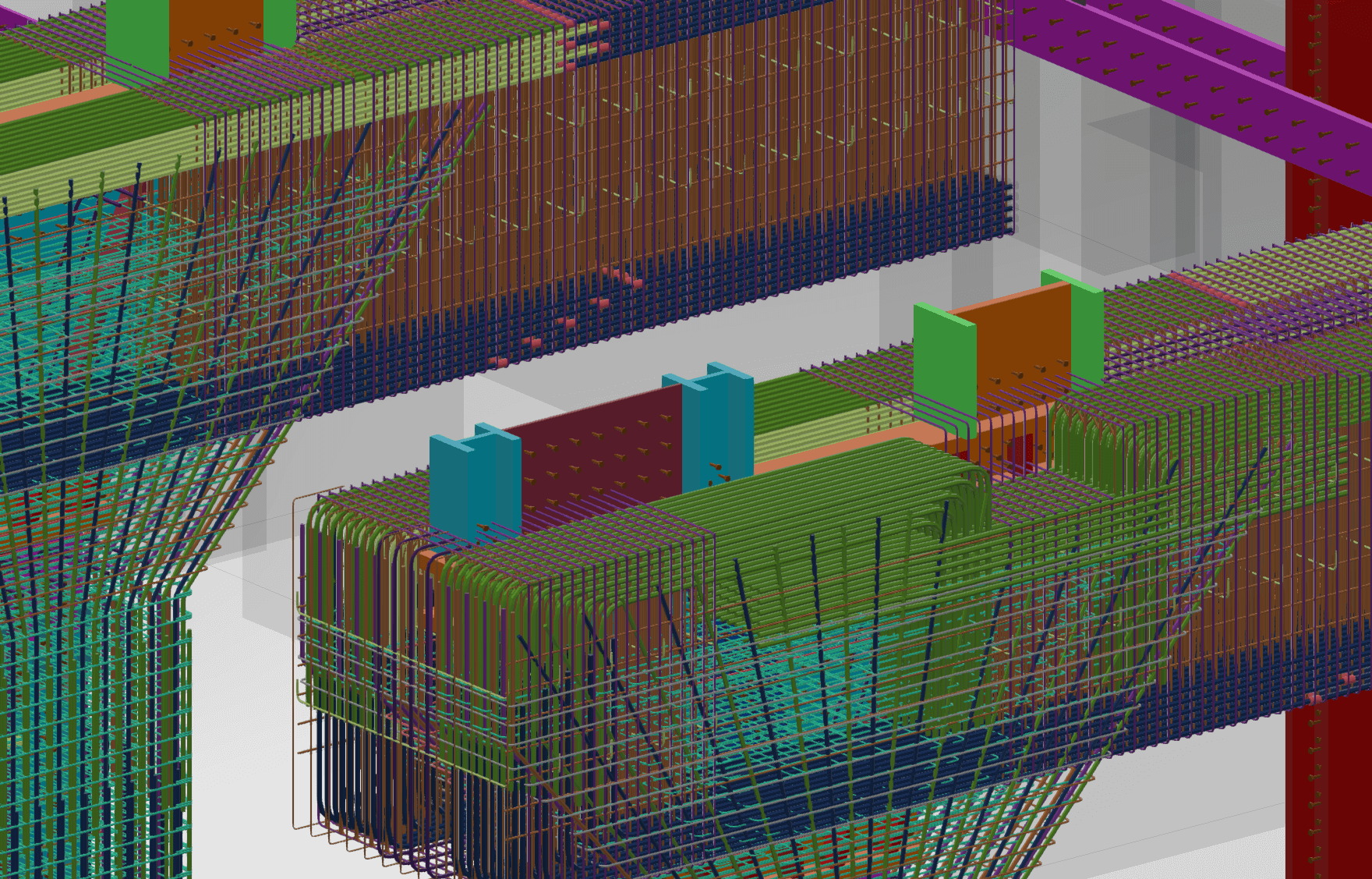 Landmark 81 is also ground-breaking in many other aspects. One of which is the distinction of Coteccons being the first local contractor to be awarded a project of this scale, beating other international firms. More impressive is the fact that the project was then completed 45 days ahead of schedule. “Our move to BIM in 2015 and adoption of Tekla solutions has been instrumental in building trust with our customers in delivering large complex projects,” said Ho Van Thao, project director for Coteccons.

"Our move to BIM in 2015 and adoption of Tekla solutions has been instrumental in building trust with our customers in delivering large complex projects."
Ho Van Thao, Project Director, Coteccons

There were many other firsts in the design and build process for Coteccons as well, amongst which, was having to deal with the largest mat footing ever – which required the country’s largest ever concrete pour – covering over 16,000 cubic metres, 8.8 metres in height (at -18 metres from level 1), massive rebar for the top and bottom layers, and H400 bracing systems. 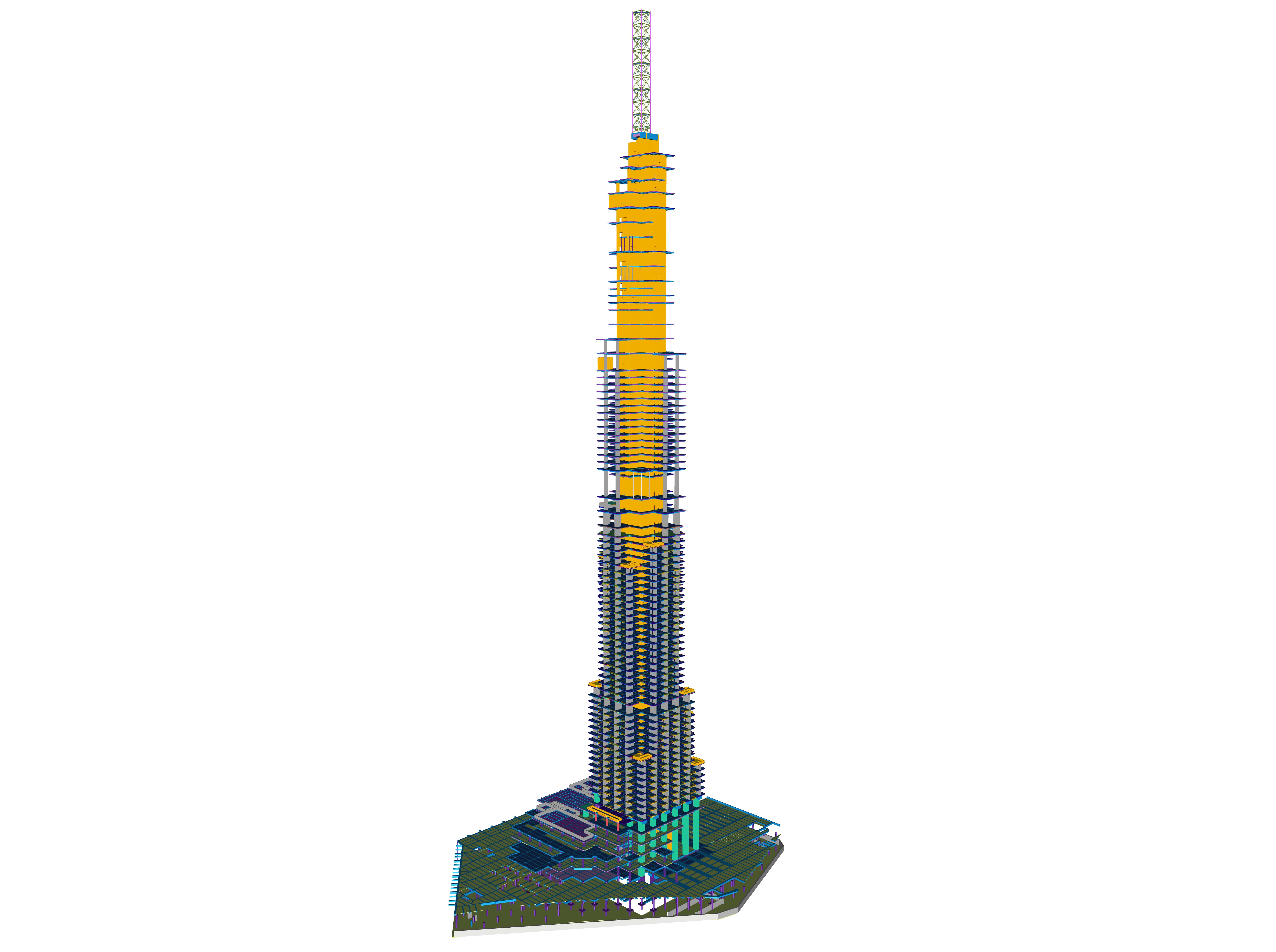 This represented a daunting challenge, with Coteccons’ project manager foreseeing clashes of rebar with shoring and the slope of the foundation. However, with the aid of BIM and Tekla, Coteccons was able to effectively spot issues at the early phase and to discuss with the client and consultants to solve clashes, ensuring constructibility was achieved. The end result was remarkable – Landmark 81’s concrete framework was completed a full six weeks ahead of schedule.

It was also the first time Coteccons had to work with a composite structure – dense rebar and steel with shear studs and welded couplers. This required complex connections, and Tekla Structures proved an invaluable tool to produce highly detailed 3D models of rebar structures with constructible, coordinated rebar and steel connections.

From the Tekla model, they could generate precise fabrication drawings and bar bending schedules (BBS), which helped them to reduce waste at the factory as well as to cut rebar accurately on site. The team also created step-by-step 3D rebar assembly guides for rebar assembly teams, which greatly sped up the assembly process and improved safety. 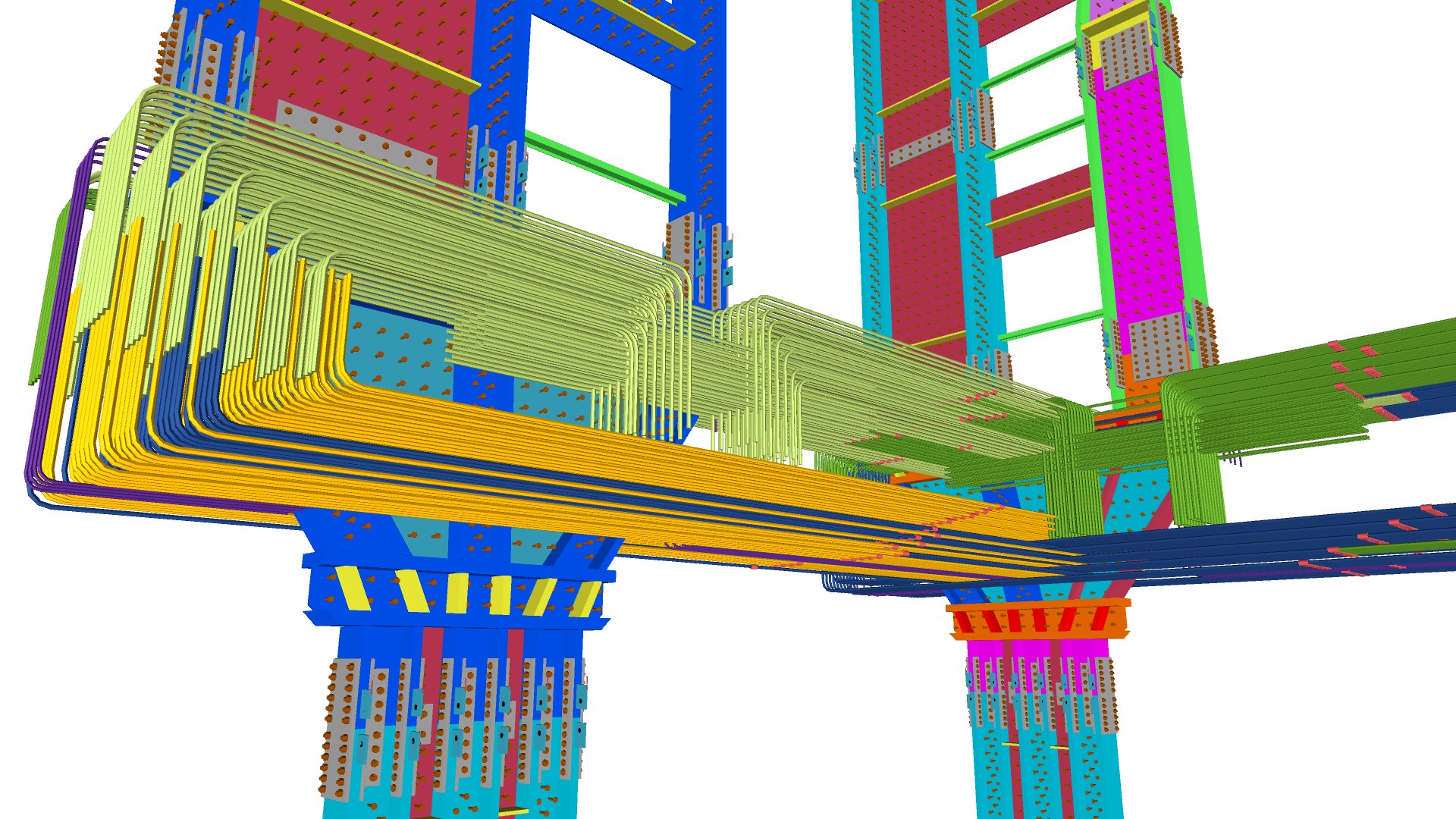 The last challenge for the team was in coming up with an effective method of construction for the super tall structure – particularly for construction equipment such as tower cranes, falling protection, dropping for slabs at over 20 meters soffit height, and the assembly of the spire at the rooftop.

As an example, because of the building’s unique design that tapers to the top, at around the 67th floor, the core of the building is too small for the cranes to continue working. This required a solution where a second crane had to be attached to the outside of the building via a console. Throughout, Tekla software was used to simulate each step of the installation, and combine it to real-world schedules in order to recognize the risks and test out many scenarios to aid in seeking out the best solution.

Tekla was the ideal choice for the Coteccons’ BIM department, having successfully applied it to their previous award-winning project, the Gold View. As such, the team were confident in its ability to deliver for Landmark 81, especially in the areas of rebar detailing, the ease of creating and managing 3D structural models in both concrete and steel, as well as the clarity it provided in guiding them through the process from concept to fabrication and final construction on site.

Tekla Structures further allowed the team’s drafters and engineers to accurately design the structures and all components in 3D, and to generate the required 2D drawings for fabrication and construction purposes.  The software also helped the team to easily manage and get access to accurate, structured building information in the models whenever needed. SketchUp was also used to help simulate 3D models for their method statements.

One key area that Coteccons believe was critical to the success of the project was in the highly effective communication ecosystem that involved the BIM team, site management, sub-contractors, and the client. Tekla BIMsight and Trimble Connect played an instrumental role – using these solutions, the entire construction workflow was highly efficient, such as the sharing of combined models using the same easy-to-use 3D environment to solve issues during the design phase.

Trimble Connect was also integral in allowing the team to easily share 3D models and information amongst each other on mobile devices on the ZALO mobile chat platform.  Another new approach used was 3D RFI (Request for information), which enabled enhanced communication between Coteccons, the client and consultants for quicker and more precise decision-making. 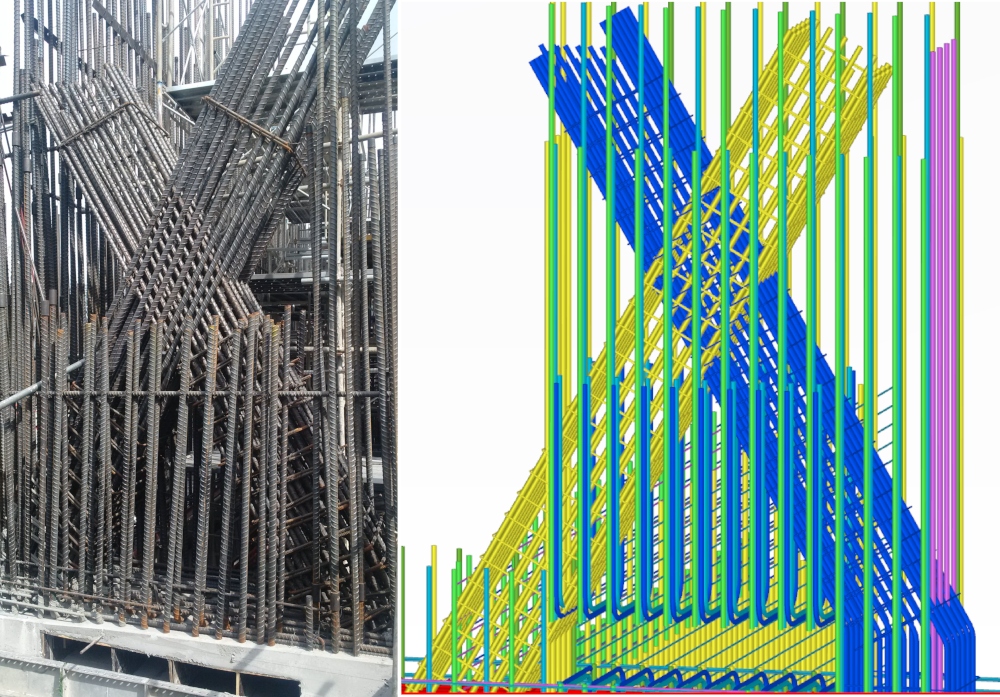 The end result speaks for itself. Landmark 81 is not only the pride of Vietnam but for Coteccons, it represents a testament to its competence and ability to engage in largescale complex construction projects on an international scale. The team is also steadfast in its belief that BIM and Tekla Software were key in making this project a success.

KEY BENEFITS OF TEKLA FOR COTECCONS