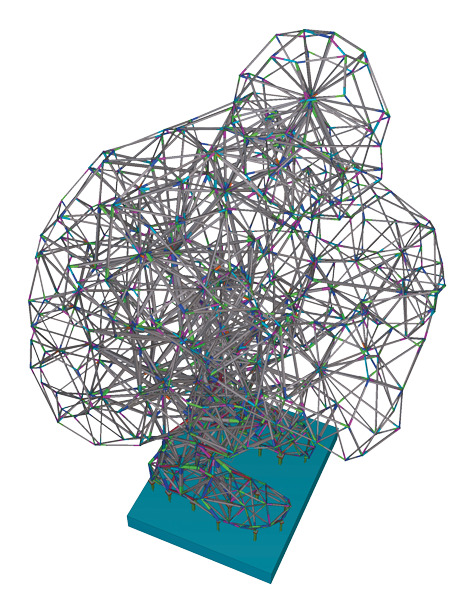 When world renowned artist Antony Gormley contracted Had-Fab Ltd to fabricate his newest landmark sculpture, it was immediately obvious that the complexity of “Exposure” would require the latest in 3D Building Information Modelling software and steel fabrication technology. Had-Fab Ltd decided to invest in Tekla Structures, which when combined with Steel Projects WinSTEEL and Ficep’s automated machinery would ensure that Gormley’s artistic vision would become a reality.

Antony Gormley’s sculptures, often based on casts of his own body, adorn public spaces and galleries across the globe, from well-known works like ‘Angel of the North’ to his newest creation ‘Exposure’. Exposure, a 25.6m high statue of a crouching Gormley is due on site in the summer of 2010 in Lelystad, Holland. In order to realise his design, Gormley needed to work with an experienced steel tower fabricator and rst approached Had-Fab Ltd in 2005 having received a recommendation from a contact in the electricity industry.

Taking on the challenge

The recommendation proved to be well-founded and Had-Fab Ltd were awarded the contract to fabricate and erect the complex steel sculpture. The company, based just outside Edinburgh in Scotland, provide a design, fabrication, galvanise, packaging and delivery service for the supply of high voltage substation support structures to the power supply industry. Had-Fab also manufacture transmission towers, radio towers and masts and this was just the sort of experience that Gormley was looking for to turn his vision into reality.

Given the complexity of the sculpture, Had-Fab recognised that they would require a comprehensive 3D BIM software solution in order to ensure that the artistic concept could be realised. Having assessed all available solutions including their current 3D software, they decided that Tekla Structures offered the most complete package in terms of detailing capability and collaborative tools and purchased their first licence in late 2006. 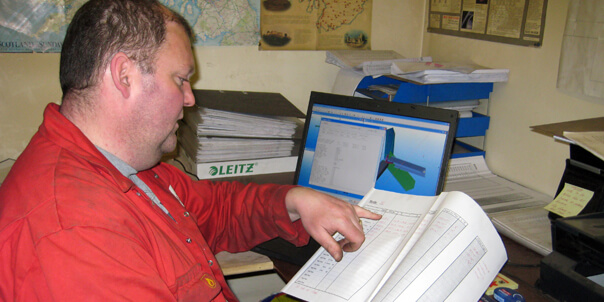 Simon Harrison, Managing Director of Had-Fab, was under no illusion as to the difficulties that lay ahead. “When I first saw the project, it was apparent that there would be a number of challenges ahead if we took the job on. However, I was confident that the combination of our design and fabrication team, Tekla Structures, Steel Projects and Ficep would ensure the success of this high profile project. Four years down the line it is clear that my confidence has been well and truly justified.”

From artist’s vision to ‘as -built ’ model 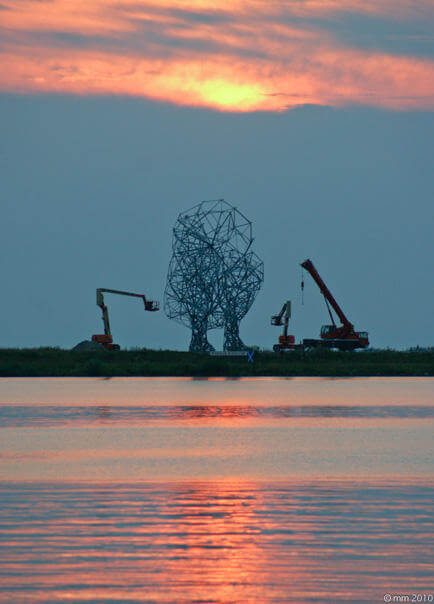 The initial shape was designed in collaboration with Cambridge University and Royal Haskoning then design models were created in both Staad Pro and SCIA Engineer software for analysis before the SCIA model was transferred directly into Tekla Structures for detailing by Had-Fab. Reference models from other software packages were also imported to assist with checking rotation and alignment of the node members from the original design.

Like transmission towers, Exposure is fabricated from rolled steel angle (RSA) sections but that is where the similarity ends. Although the main model was created in Tekla Structures 13, Version 14 was used for modelling the individual nodes, the heaviest of which weighs 280kg. Such was their complexity, Had-Fab relied on Tekla’s detailing tools, and most notably the powerful cutting and automated split functions, to formulate an efficient process for modelling the nodes. In addition, Tekla worked with Had-Fab to develop a number of useful macros and user-defined components for cutting and intersecting the node members.

With such a complex and precisely engineered structure, effective collaboration was critical to the success of the project. Had-Fab used Tekla Structures’ web viewer tool to provide Royal Haskoning’s engineer Eelco de Winter with 3D details of the nodes, which enabled him to confirm that their construction met his design requirements. The web viewer also proved invaluable during the fabrication process, as Paul Mair, Steel Fabrication Chargehand and Site Erection Foreman at Had-Fab explains “The web viewer was a necessity to gain the true angles of members as well as rotational and other important dimensional checks. Trying to establish all this from just a 2D assembly drawing would have been very confusing.” The fabrication team also had a laptop with the full model on at their disposal for clarification purposes allowing them to rotate the model and interrogate from any angle.

From ‘as -built ’ model to reality

Had-Fab invested in a new Ficep CNC machine specifically for the Exposure project to add to their three existing machines. The new HP16T6 CNC angle line offered a host of new technology which, when combined with the in-feed transfer speed of up to 100m/min, offered Had-Fab Ltd a number of advantages. The machine can be equipped with automatic feeding and loading, punching, drilling with tool changer, notching, marking utilising cassette or individual characters, quickchange punch and die sets, quick-change shear blades, and automatic part unloading for the out-feed conveyor.

The machine was further enhanced by Steel Projects WinSTEEL software, which interfaced directly with Tekla Structures to create the codes for the Ficep machine. By directly importing of Tekla files and contract phases, WinSTEEL allows for control and management of parts, profile databases, machine and tooling cycles to automatic part routing to machines. Users are also able to view graphical representations of the parts or bars at all stages of the production process.

The steel was punched and sheared to length by the equipment and skilled, labour-intensive shaping of the material was carried out to form 547 nodes consisting of up to 29 angles meeting together to form locating points around the structure. These are subsequently joined together with longer angles bolted and welded in position. In total there will be 32,000 holes punched or drilled in the angle profiles. 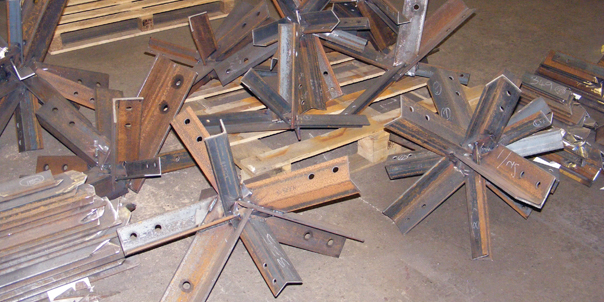