The new Sandwell Aquatics Centre in Smethwick will host the diving and swimming events for the Birmingham 2022 Commonwealth Games. The state-of-the-art facility includes a 50m Olympic-sized swimming pool as well as a 25m diving pool, community swimming pool and seats for up to 1,000 spectators.

Other facilities at the Aquatics Centre includes three activity studios, two 4-court sports halls, a 108-station fitness suite with a 25-station ladies-only gym, dry diving facilities, an indoor cycling studio, a new football pitch, a café and changing facilities including a sauna/steam room. Externally, a new urban park will feature a children’s play area.
Work on the £73 million project is set to be completed in Spring 2022 and handed over to Birmingham City Council to host the Commonwealth Games. The building will be officially open for use by the public in May 2023.
Billington is providing over 1900 tonnes of steel for the project, including 14 roof trusses. The choice of a steel-framed solution for the project was driven by the long span roof, which covers a space that for the most part has no internal columns. With an overall footprint of 120m-long × 70m-wide, the structure is a large steel braced frame. The curved roof trusses span the width of the building accommodating both the sports hall and the pool hall.

The impressive roof span of 70m is created by a series of 14 roof trusses, which were erected in a phased programme. Due to their size, each truss was fabricated in four pieces, which allowed them to be transported to site. Once on site, Billington used two laydown and assembly areas on either side of the building, where the steelwork was bolted together to form two halves of the entire roof truss. Each half was lifted into position with a tandem lift using two 250t-capacity crawler cranes that brought the two pairs together in mid-air for the final connections to be made. Once this final connection was completed, the entire truss was then manoeuvred to its final position, and the bolted connections to the perimeter columns were made with the aid of a 90t-capacity mobile crane positioned within the footprint of the structure. The perimeter supporting columns are a series of 22m-high columns positioned along the eastern elevation and 13m-high columns on the opposite façade.

As an architectural feature, much of the project’s steelwork remains exposed within the completed project. But as a swimming pool can be a very corrosive environment because of the chlorinated water and temperatures, a total of eight different paint specifications, including both intumescent and corrosion protection systems, were applied to the steelwork offsite.
All aspects of material selection and corrosion protection demand special attention when the structure is an indoor swimming pool. Swimming pools are classified as corrosivity category C4 in BS EN ISO 12944-2, which is “high corrosivity”. The atmosphere in an indoor swimming pool is one of the most aggressive to be found in a building environment, due to the products from chlorine-based disinfectants, the higher temperature and humidity.

For the Sandwell Aquatics Centre, carbon steel was used, which needed careful consideration of the protection system. In an aggressive environment such as a swimming pool, designers also needed to pay attention to the corrosion of components, such as bolts, which are often visible to the pool users and should be protected properly.

The structural design for the building is particularly complex due to two distinct phases of construction. The building is designed to function as a venue for an international swimming competition without compromising the primary objective, which is to provide a legacy leisure and aquatic centre for the local community in Sandwell.

The roof trusses are curved and form a feature sloping roof. The geometry of this roof curvature has been optimised to provide sightlines for a 5,000-seat temporary seating terrace that is to be installed on a steel-framed upper floor along the eastern side of the swimming pool (which has the 22m-high columns). This innovative solution to accommodate the temporary seating within the envelope of the building minimised both time and cost by reducing the extent of the conversion works for legacy mode.

Using steelwork for the project has provided the scheme with a number of benefits, alongside with the ease of creating the Centre’s span and speed of construction, flexibility has also been designed into the steel frame. After the building has been used as a competition venue this area of the building, used for the temporary seating terrace, becomes the zone that accommodates the sports halls along with changing rooms and fitness studios. Additional steel-framed floors will be installed within the building envelope, with new steelwork spliced onto columns below and located onto transfer beams. Metal deck composite floors have been detailed for these legacy floors to minimise the weight of components that need to be lifted within the building. 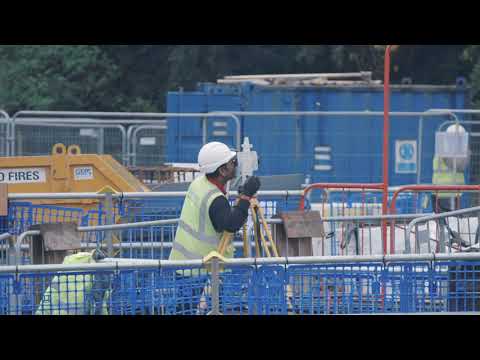