"This is a fantastic project with an important ethos in sustainability, resulting in non-recyclable waste being removed from landfill while also combating climate change. Billington Structures built incredibly complex connection details within a very challenging construction context. They have also created an interesting build sequence." - Judges comments

North and South views of model 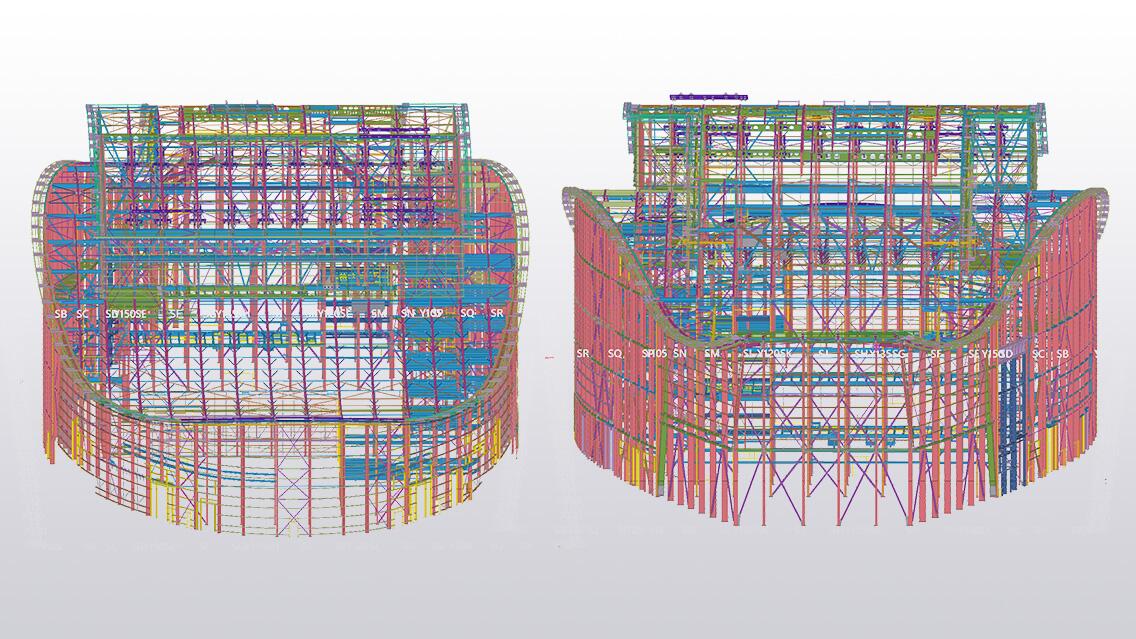 Turbine hall with close-up of truss 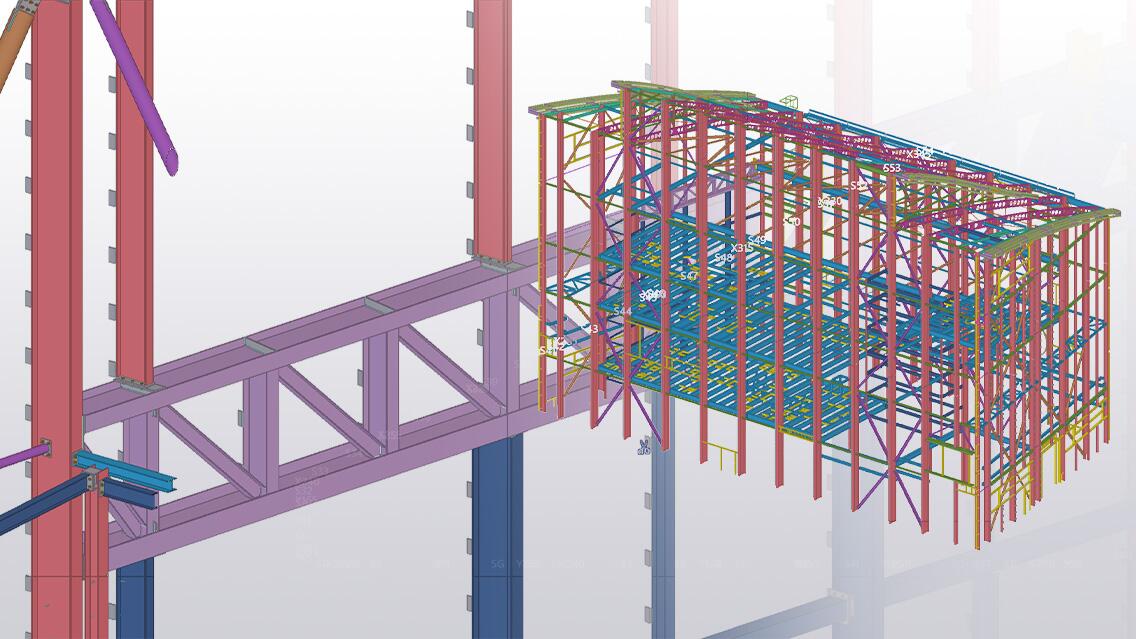 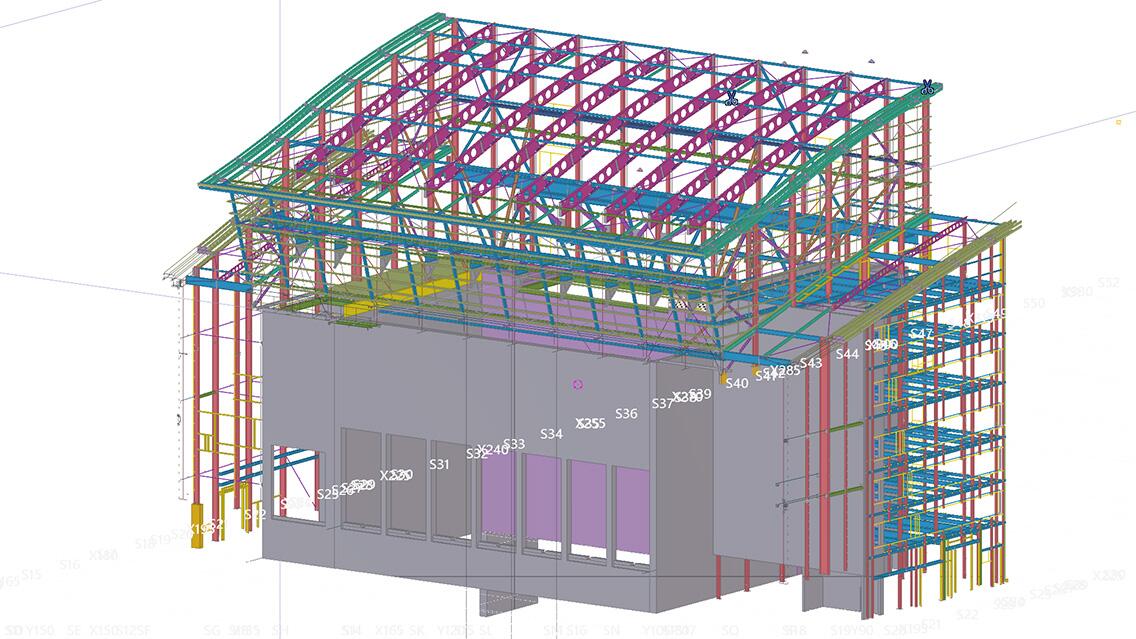 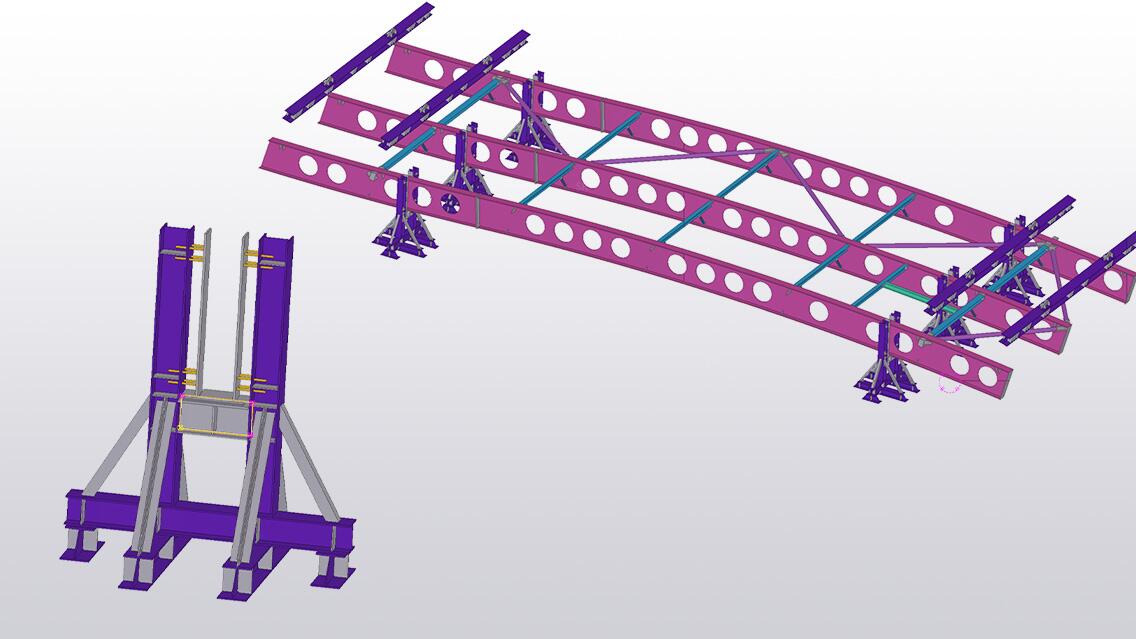 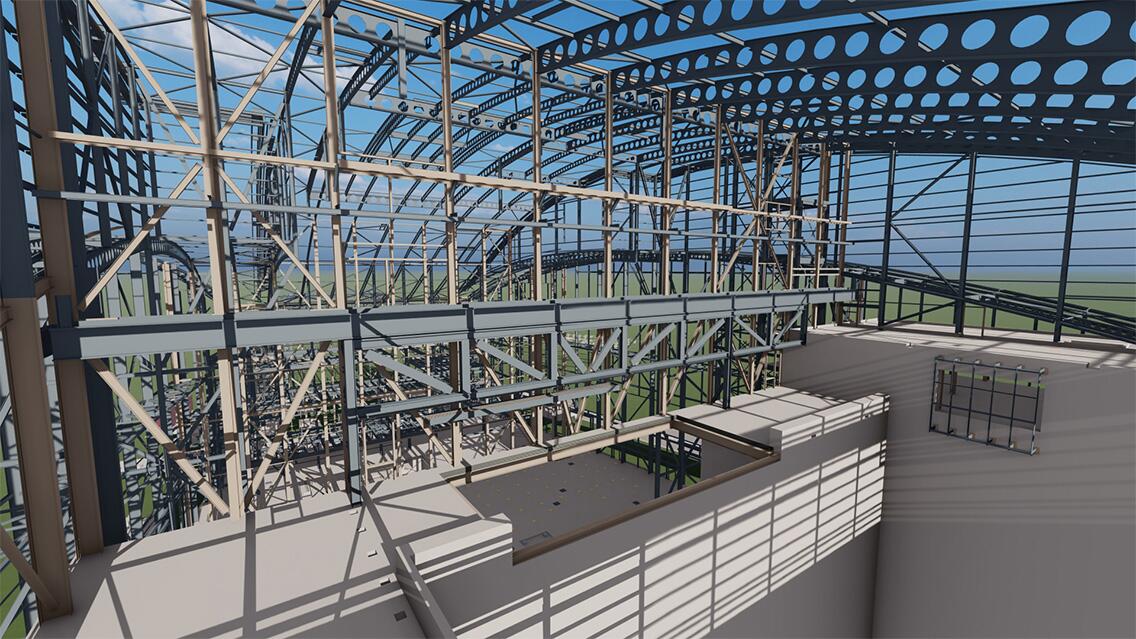 Aerial view of facility under construction 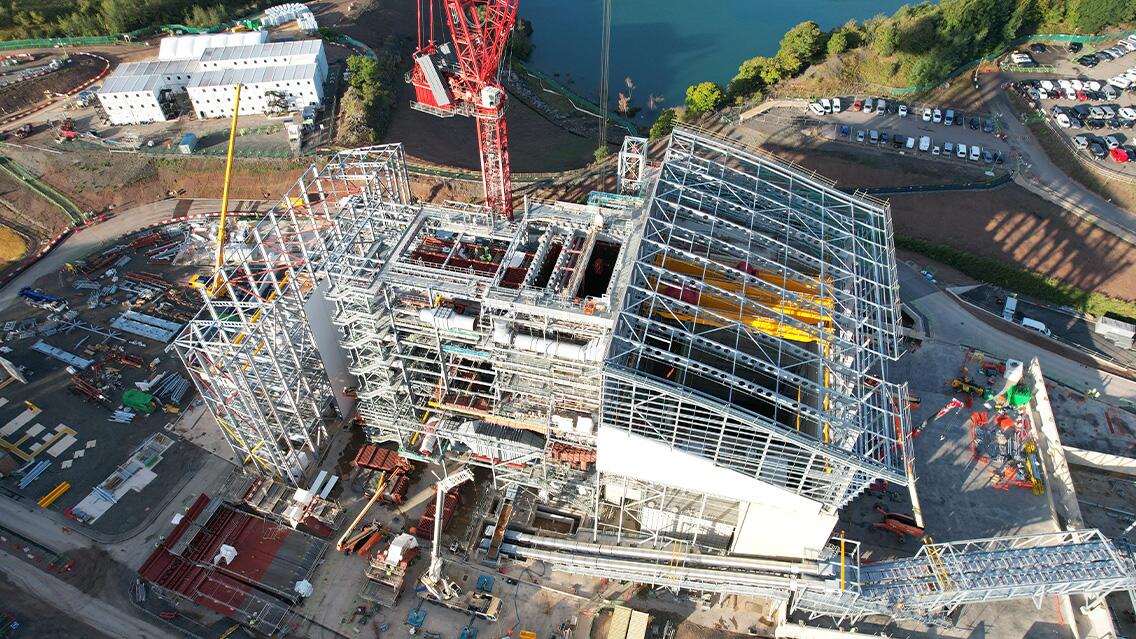 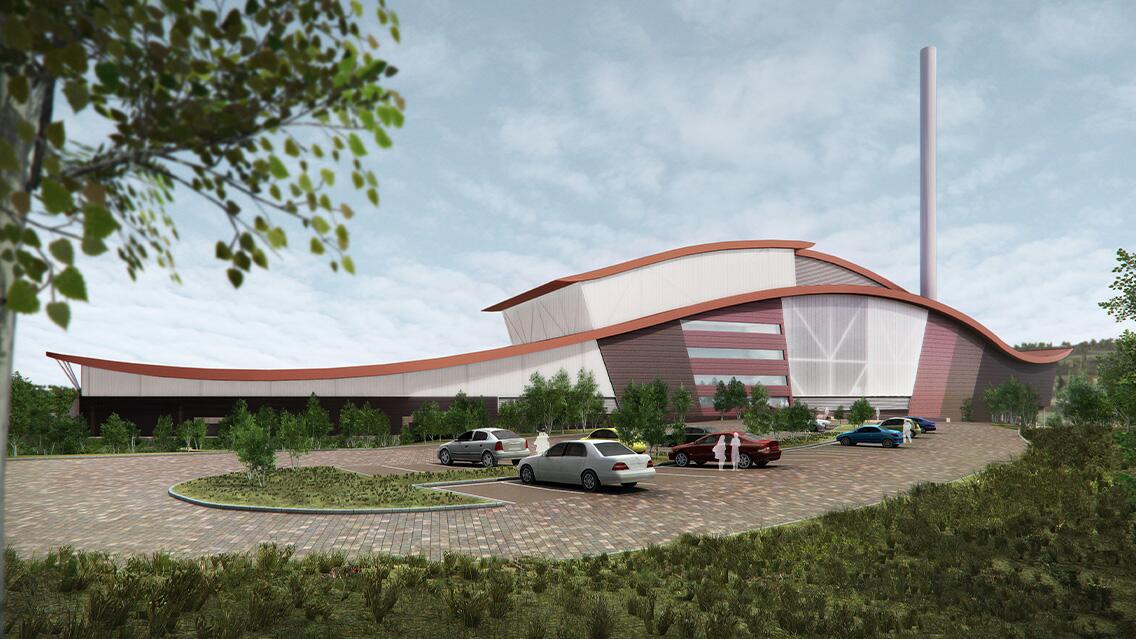 Located just off the M1 motorway in a former quarry, the Newhurst EfW facility is a significant addition to the UK’s waste management infrastructure. It supports the Government’s drive to both, reduce reliance on landfill and to increase the UK’s ability to treat more non-recyclable waste, without relying on export to overseas facilities.

The facility will use proven technology to provide up to 350,000 tonnes of annual treatment capacity for non-recyclable waste and will generate up to 42 megawatts of electricity, enough to power around 80,000 homes. The Newhurst EfW facility will provide important sustainable waste treatment capacity in the drive to move non-recyclable waste away from landfill and combat climate change.

Working on behalf of Hitachi Zosen Inova (HZI), Billington Structures was the project’s steelwork contractor, fabricating and supplying 2,900 tonnes of structural steelwork. The company erected approximately half of this steel tonnage, with the other half being supplied to the project for other contractors to install along with the facility’s process equipment. This part of the steel package consisted of support structures, gantries and maintenance walkways.

The main Newhurst EfW steelwork programme included five areas - the tipping hall, waste bunker, bottom ash building, fire tank/pump room and a six-storey administrative block. The buildings are all inter-connected and enveloped to from a complex ‘wing’ profile in plan and a waveform roof.

Steel construction provided the ideal framing solution for an energy-from-waste facility with such a complex and challenging shape. From the intricate process support requirements to the curving roof, which changes in geometry along its length from concave to convex and then back to concave, steelwork provided the economy, flexibility, simplicity of design and speed of erection unrivalled by any other material.

To accommodate the flowing curved lines of the architectural vision, the steel frame has members curved in plan, curved in elevation, and in some locations, curved in both axes. As these curves can be modelled using Tekla software, and then curved on site, accurately, in factory conditions, site erection becomes very fast. No need for complex framework or other on-site formers that would take so much more time. The size and complexity of the individual buildings, and associated long spans, were also best suited to steel, with its light weight and strength. The steelwork had to be erected around the installation of processing equipment, so flexibility of sequencing and ability to temporarily support large structural elements with minimum of inconvenience to other site operations was vital and couldn’t be achieved with any other form of construction.

One of the main challenges set for Billington Structures was in relation to the erection of a series of 25m-tall columns forming a wall that sat on top of the 25m-high concrete waste bunker. To suit the Client’s programme, the wall was to be fully clad prior to the roof or any permanent stability bracing being in place. Temporary lateral restraint was provided by a system of enormous raking CHS props, supporting a whaler beam across the entire length of the wall (50m), and connected to discreet elements of the concrete waste bunker structure below. The supports could not be removed until the 32m span roof rafters had all been installed along with the permanent stability bracing.

The waste bunker rafters were delivered to site in single 16m-long pieces and assembled on the ground into three separate roof ‘modules’ along with tying steel, roof bracing, and hanging services. These modules were then lifted and located each in entirety in single lifts in order to reduce to a minimum any working at great height above the waste bunker. The waste bunker building also has two overhead gantry cranes, which run along crane beams supported from the main columns. Supporting the crane beams and minimising any vibrations from the cranes, which operate 24 hours a day, meant the column sections had to be larger than would ordinarily be needed. Additionally, all related connections were designed and detailed for the onerous fatigue conditions associated with such intense crane usage.

Separating the waste bunker building from the adjoining boiler house is a fire wall, which is formed by a series of composite panels that are attached to an 8m deep truss located at a height of 23m. The truss also supports the series of columns above that support the roof and a floor that accommodates hoppers. The truss was brought to site in single elements that were erected individually due to the size, weight and the limited space to accommodate a crane at that stage of construction. Stability for the entire building is provided by a combination of horizontal and vertically braced bays, the rigid box of the concrete waste bunker structure and in the case of the admin building section, two concrete stair cores.

The UK Tekla Awards honour projects that transform the way the world builds.