Well established within the structural engineering industry, Clancy Consulting has long been a firm advocate of digital technology and BIM software. A user of Tekla Structural Designer for many years, Clancy Consulting has been reaping the rewards ever since – both in terms of time savings and also the added value it enables them to offer clients.

Clancy Consulting, a multi-discipline engineering firm, is well-versed in the language of BIM and digital technology, having been a Tekla software user for many years and with Tekla Structural Designer forming an integral part of its processes and workflows.

Talking about how digital technology has revolutionised the way they work, James Gendall, Divisional Director at Clancy Consulting, commented: The streamlined processes and integration of workflows made possible by BIM are invaluable. In fact, I would say that software integration is perhaps one of the greatest industry advancements in recent years. In order to ensure the continuous exchange and smooth transfer of accurate data from department to department and discipline to discipline, effective integration and migration of data is essential. Without this connection, any time savings and other efficiencies achieved at one stage of a project are all but lost as you progress.

For us as structural engineers, the integration within Tekla enables us to achieve a more streamlined process overall. Rather than drawing or modelling the building in one software and then having to effectively start from scratch with the structural analysis in another, you are provided with one, cohesive process – thanks to the efficient transfer of data. Considering these two vital stages of any structural engineering project are so intrinsically linked, why should they be treated in isolation?

This is just one of the reasons why Tekla Structural Designer is such a great fit for our business, having been developed to seamlessly integrate with both Tekla Structures and other leading design software suites, including Autodesk Revit. The value of this is hugely significant, improving productivity levels and providing us with an efficient and simplified process.

As well as achieving interoperability between software suites, Clancy Consulting has also benefitted from this same idea of integration elsewhere within the business, as James explained:

Prior to such developments, engineers and draftsmen were almost treated as two different disciplines. Traditionally, engineers would be primarily proficient in the use of analysis and design software, while the draftsperson would use draughting packages, such as Tekla Structures or Autodesk Revit. However, as digital technology progresses and more attention is paid to the importance of interoperability, we are witnessing the divide between traditional engineering and CAD breaking down. In its place, we are seeing skills merging and the emergence of, for want of a better term, ‘super users’ - those who are conversant with both software suites and disciplines.

Practically speaking, Tekla Structural Designer’s ability to integrate with other BIM design software, combined with this new ‘super user’, provides us with many benefits. Perhaps the most valuable to us, is the speed. Through the intelligent link between Tekla Structural Designer and Revit, we are able to turn around design changes at a far quicker pace. To put it into real-life terms, whereas a design change may have previously taken us a couple of days to resolve, we are now able to model and analyse it in a matter of hours – a significant time saving.

Through the intelligent link between Tekla Structural Designer and Revit, we are able to turn around design changes at a far quicker pace. To put it into real-life terms, whereas a design change may have previously taken us a couple of days to resolve, we are now able to model and analyse it in a matter of hours – a significant time saving.

Consequently, with design changes no longer taking up a significant amount of Clancy Consulting’s time and resources, the team are able to take a more proactive approach to a project.

James continued: This change in practice enables us to, rather than merely react to design changes required on a project, instead proactively propose and explore a range of alternative design options. Through the tools within Tekla Structural Designer and, again, its integration with Revit, we are able to consider, design and analyse a greater number of design variations in an effort to settle on the most structurally efficient.

This ability to search for the most optimum and cost-effective design in a fast and efficient way has become a major marketing tool within the engineering industry. While the time savings benefit us a company, it is ultimately the end-client who benefits from our resulting proactive approach to structural design, with Tekla Structural Designer enabling us to deliver added value on projects and stay ahead of the competition.

James explained: Whereas we may have previously had different design packages for concrete and steel, Tekla Structural Designer can be used for both. This is hugely valuable, for obvious reasons. It is vital, both for the success of the project and the structure’s long-term performance, that you are able to design, consider and analyse both materials together, allowing the correct stiffness relationship between the two to be assessed.

From my perspective, it makes logical sense to be able to analyse both the concrete substructure and the steel (or concrete) superstructure as one, and in a single software package. Tekla Structural Designer enables us to have a full understanding of how the materials will behave together and what structural effect one may have on the other, both immediately after construction and throughout the building’s lifetime.

This ability to simultaneously analyse and consider the behaviour of both a steel superstructure and concrete substructure is particularly important when working with raft foundations. Raft foundations are structurally sensitive and complex, with the effects of the raft settlement influencing the superstructure above. The settlement and stiffness of the raft can influence the behaviour of the steel frame above, with the potential to develop actions within the frame that would have otherwise not been considered. It’s therefore vital that you are able to predict and analyse the behaviour of both the super and the substructure, before a design is signed off and more importantly, prior to construction commencing.

As a result of the multi-material capabilities and recent developments within Tekla Structural Designer, Clancy Consulting has been able to focus on developing its expertise and experience in raft foundations, advancing within this field of engineering by working effectively with geotechnical engineering companies.

Speaking about what the future holds for BIM and structural engineering, James concluded: As BIM progresses, for of course technology is in constant development, I believe that integration will play a central role in the future of structural analysis software – particularly the integration between structural, geo-technical engineering, programming and draughting software. This drive in integrated technology will enable companies, such as ourselves, to further expand our capabilities and increase efficiency.

Particularly within engineering, the industry’s competitive nature is what drives innovation. We are always looking for ways in which we can improve efficiency, whether of our workflows or of the buildings we are designing. Fortunately, Trimble places a strong emphasis on software development and improvement, listening to both customer feedback and conversations within the wider industry. The result of this, is that not only are we provided with a better software product, but Trimble helps us to provide a higher value service to our clients.

How did Wareing Buildings use a central information management system to digitise their everyday business p... 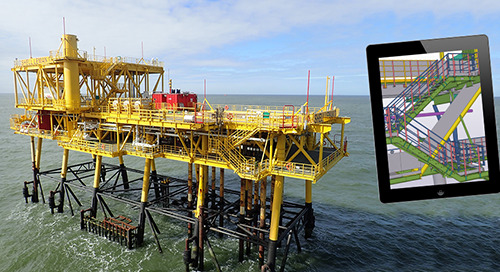