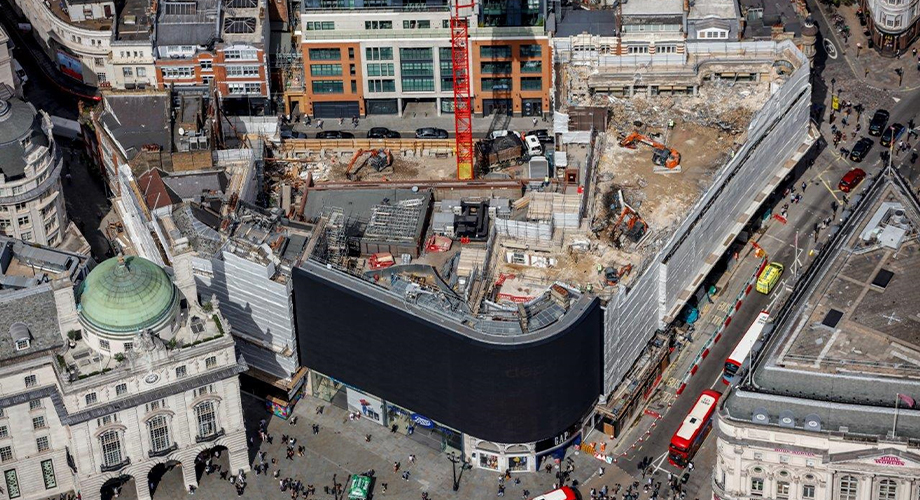 When it came to designing the temporary works for the £250million One Sherwood Street development project, at which London’s iconic Piccadilly Lights sit at the core, Swanton Consulting knew that accuracy and 3D coordination was essential, turning to BIM and Tekla Structures.

The famous digital billboards (The Lights) are a landmark feature of London’s iconic Piccadilly Circus, visited by millions of locals and tourists every year. Recently, a £250 million development project has been underway to revive and transform One Sherwood Street - the space behind The Lights - into a new six-story building. Designed by architects Fletcher Priest and delivered by principal contractor Wates for developer Landsec, the development will comprise over 100,000 square feet of commercial office space, 30,000 square feet of retail space and seven new residential units.

While the project included the demolition of almost all structures in the block, the digital billboards were to be retained and kept functional throughout the whole demolition and construction process, ensuring that the attraction remained open and uninterrupted for tourists.

Swanton Consulting, the specialist engineering company based in London, was appointed to design the project’s temporary enabling works by Erith Contractors, which most noticeably included the retention structure for the Piccadilly Lights, as well as demolition back-propping, temporary propping of sheet piles, party wall support and top-down basement design in the temporary stage.

Zoltan Kolumban, Senior Engineer at Swanton Consulting, said: As a business, Swanton was first established in 2010 and has been using Trimble’s Tekla software since 2013. Today, we are long-standing users of Tekla Structures, Trimble Connect and Tekla Tedds, as well as the Trimble laser scanning hardware & Trimble RealWorks.

It’s safe to say that One Sherwood Street was a highly complex project, comprising cut-and-carve around structures of varying construction, condition and age. The retention of the Piccadilly Lights was a pivotal stage of the project, enabling the next stage of demolition and construction to proceed. As well as considering the safety of workers on the site and in the safeguarded retail units, we also had to ensure the uninterrupted experience of tourists visiting the location.

When first approaching The Lights retention, Swanton Consulting adopted a segregated approach by dividing The Lights structure into two distinct parts: the straight and the curved section. The straight section comprised a dense, existing steel structure installed in the 1970s, as well as an overhead plant and building maintenance unit, which was to remain operational. While the curved section was formed of an existing masonry building with a curved façade wall. 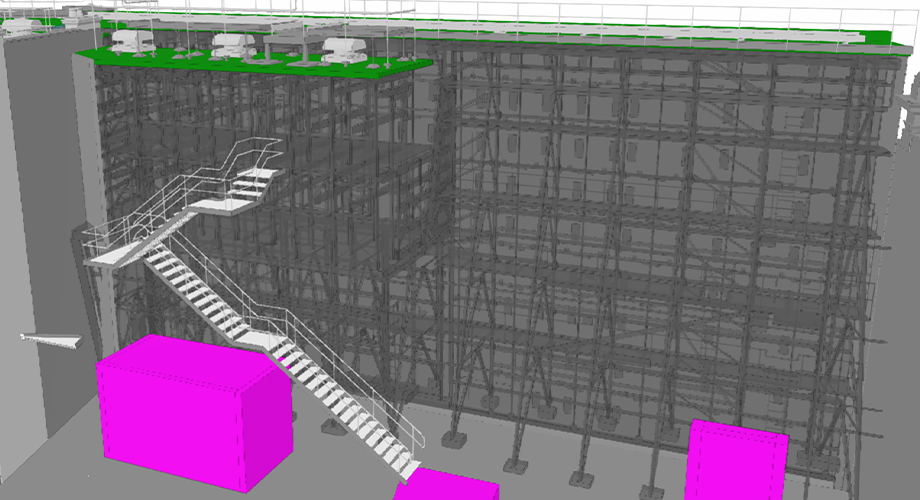 Zoltan explained: Both halves featured highly congested and complex existing structural interactions. As a result, our temporary steel support structure had to fit between and around the existing structure, while also allowing for the construction of the new permanent steelwork. It was an incredibly tight space to work in and is why Tekla and the 3D coordination it enabled was so valuable.

To validate the existing models, surveys and drawings, we first completed a point cloud survey using the Trimble TX8. Thanks to the direct software integration and intelligent interoperability, we were able to then import this data into Tekla Structures, along with the original site survey (supplied as an IFC file) and the permanent works model. The ability to overlay this all within the 3D environment meant that we were able to first ensure that the point cloud matched up with the IFC survey file, before then commencing to model our temporary works steelwork within the remaining space. 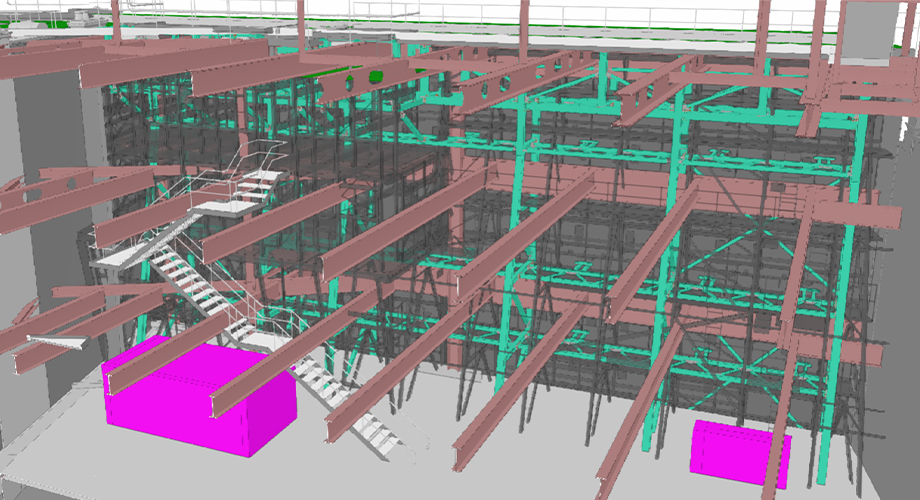 Zoltan continued: When working with such tight tolerances, in such a compact space and with both the existing, the temporary and the permanent to consider, buildability was a major concern. It was imperative that we were able to ensure the design was constructible and that areas were accessible. Here, again the 3D modelling environment proved invaluable.

It’s all about having visual control – for example, if I move this steel section 100mm to the right, will the design still be constructible, or will it clash? Thanks to the high level of detail and enhanced visibility enabled by Tekla Structures, you’re able to immediately see the clashes and work effectively and efficiently to solve them. Without the 3D environment, we would have struggled massively.

With such tight tolerances between the enabling works and the permanent, effective collaboration and communication between all project parties was essential, as Zoltan explained. 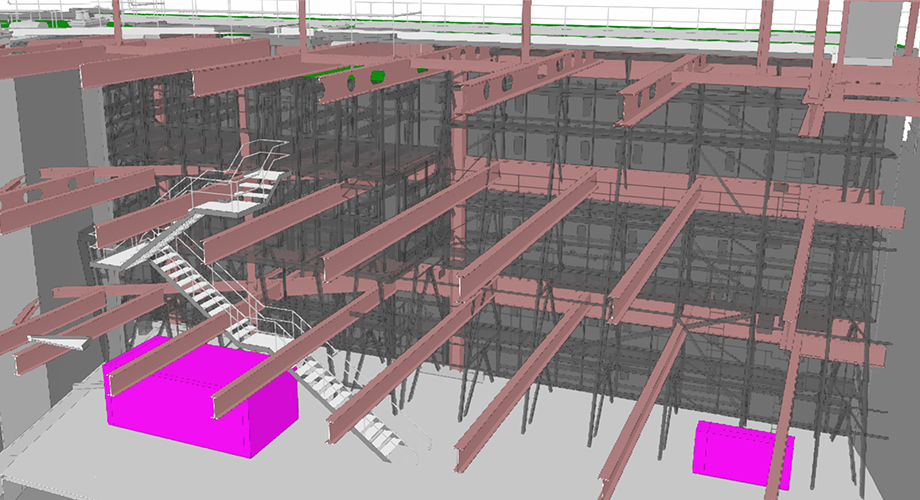 An overlay of the existing structure with the future permanent works.

As well as Tekla Structures, Tekla BIMsight (now Trimble Connect) was also used throughout the project. It proved an integral tool within meetings, enabling us to visually display and overlay the permanent works model, survey model and our Tekla model. With this, everyone was able to really visualise and have a more detailed understanding of the project as a whole, including how all the individual sections and stages fit together. The 3D model proved a key point of discussion.

Understandably, when dealing with a retention project of this complexity, designing the temporary supporting steelwork is just the start of the process, with teams having to also consider how it will be phased and installed on site.

Zoltan continued: The erection of the steel structure was phased around the demolition, with clear hold points of when and what needed to be installed to allow the removal of a certain part of the existing masonry / concrete structure. With the central 3D Tekla model, we were able to use this to clearly plan and set out the installation and demolition sequence, colour-coding the individual steel components to show what could be installed without clashes and what would clash with the existing steelwork, requiring sequence-critical removal. 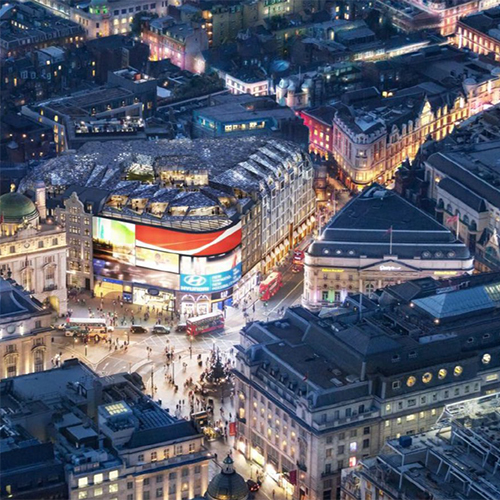 In total, almost 8400 design hours were spent by Swanton Consulting on the One Sherwood Street project, with the Piccadilly Lights retention steelwork successfully installed during Summer 2019.

Zoltan concluded: When it comes to temporary works projects, such as this one, visualisation is key. It’s for this reason that BIM is perhaps so powerful and valuable. This, combined with the ability to first carry out a detailed 3D laser scan or cloud point survey of the existing site or structure, makes the whole temporary works design process both easier and a lot more accurate. It’s all about reducing error and ensuring the temporary works design is constructible in the real world.

With an expected completion date of June 2022, the project is currently in its final phases of superstructure construction, with the internal fit-out to commence shortly.