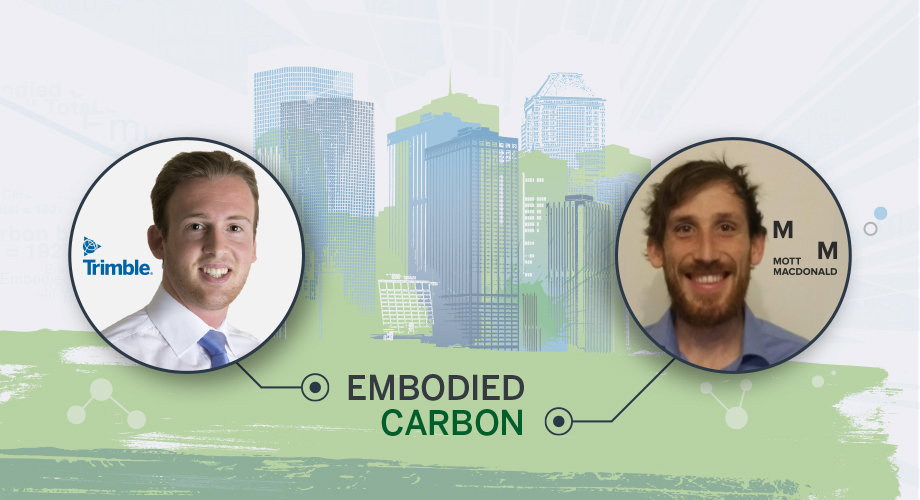 Construction knows that it has a carbon problem, with actions underway to help build greener. Engineers undoubtedly have a key role to play, working to reduce the amount of embodied carbon present in their structural designs. In this article, Ian Poole (Senior Structural Engineer at Mott MacDonald and part of the IStructE’s Sustainability Panel) and Stuart Campbell (Trimble UK’s Business Development Manager for Engineering) explore why engineers should calculate carbon as they design and how Tekla tools can help.

The reasons for reducing carbon in construction are clear, with everyone having an opportunity – in many ways, a responsibility - to make a positive change and work to lessen the impact of climate change. Engineers are perhaps especially well-positioned to make a real difference, with a significant portion of a building’s final embodied carbon value being ‘locked in’ through decisions made as early on as the initial design stage.

As such, there is evidently a need to bring carbon into the design and decision-making process, in much the same way as cost, time and quality drivers already are. Indeed, calculating carbon as you design is vital, enabling engineers to tailor the design decisions they make, as they are made.

Ian: By considering carbon during the design process, engineers can benefit from live carbon calculations and use these to inform design. Through having carbon calculations built into design software, the time barrier of calculating carbon is removed, enabling engineers to better understand the impact of their design decisions and spend more time optimising solutions.

All too often, we see carbon calculations being carried out after key structural decisions have already been made. In addition to being a far more unproductive method, this really isn’t helping to inform what we do or how we do it. A fundamental part of approaching embodied carbon is to understand the level of carbon present in a building and the impact our design decisions will have on this level. Only then can we as engineers consciously adapt the design, make greener choices and better inform future projects.

Stuart: This need for live calculations is at the forefront of the Carbon Calculator tool available within Tekla Structural Designer.

In many ways, the whole Tekla workflow is built around the idea of connected design and integrated data. It’s why a change in the constructible 3D model is automatically reflected in the associated documentation. It’s the same for our Carbon Calculator, where engineers are provided with an updated carbon view for every design decision or change made to the original 3D model.

Ian: “I don’t have time to do carbon” can be a common excuse; but really, if you’re using digital tools, like Tekla’s Carbon Calculator, then there’s no significant design time added. You simply set up the relevant carbon factors at the start of the project and then the carbon calculation is automatically generated and updated as your project progresses. 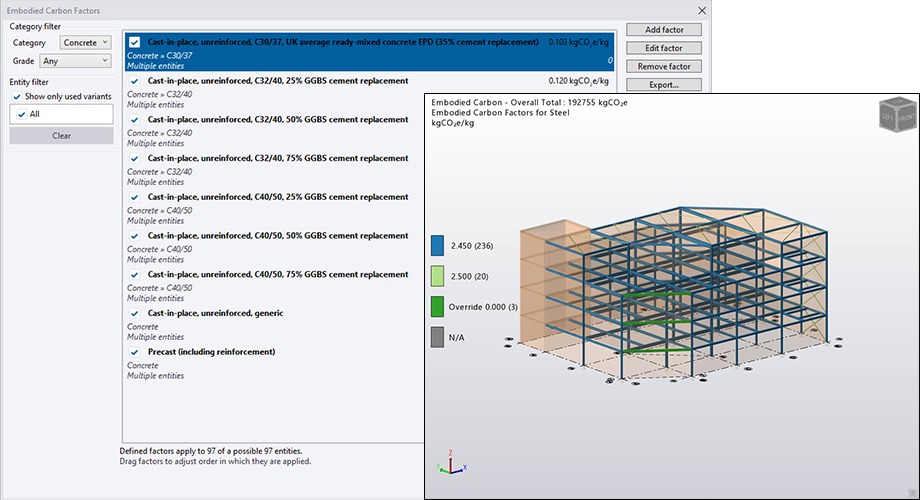 Ian: Another benefit of calculating as you design is that it gives you the ability to run various carbon comparisons, rather than simply calculating the carbon value of your final structural model. By using BIM software, engineers can set up models and run a variety of different comparisons - such as changing the grid, the layout, the materials used - and then assess which has the lowest carbon footprint.

Stuart: Taking this theme of optioneering further, it nicely feeds into parametric design, or data-driven design as it can also be known. By using parametric design add-on tools, such as Grasshopper and Rhino, engineers can set carbon as the key driver or parameter and then allow the computer software to automatically generate possible design iterations; in turn, identifying which structural design leads to the best outcome in terms of carbon emissions.

Something else to consider is using a multi-material BIM software. This way engineers can assess both a building’s superstructure and substructure in the same model, leading you to the best solution for the building as a whole, rather than just on an elemental level. 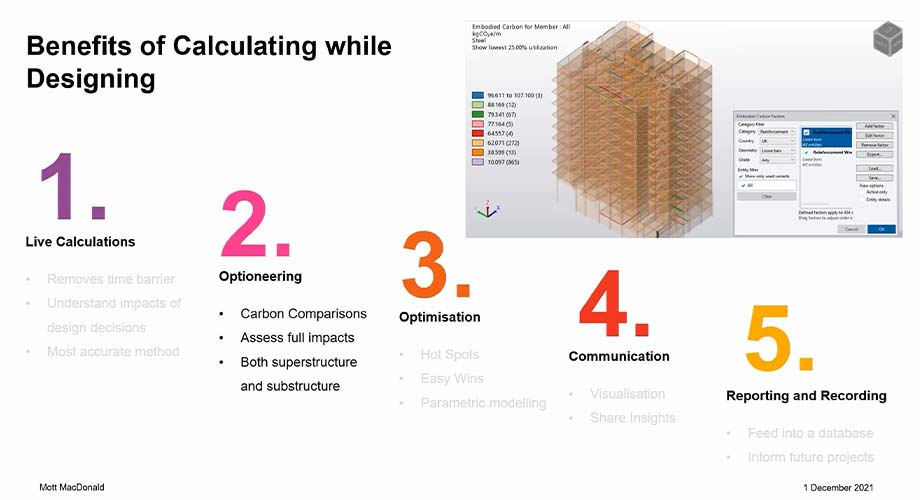 Ian: With live calculations, engineers are provided with an instant visual of what is performing well and what isn’t. Taking this further, engineers can use the data to find any “hot spots”, areas that are especially carbon intensive, and focus their attention on optimising the performance of these specific components.

Stuart: During the design process, it’s understandable that engineers may not have time to go over and optimise every single member and individual structural component. That’s why Tekla has an “easy wins” feature, where engineers can easily view the lowest utilisations alongside the highest carbon members. The benefit of this is that, rather than spending time optimising small members that contribute little to the total carbon value, engineers can instead optimise fewer larger members that contribute more to the total carbon value. 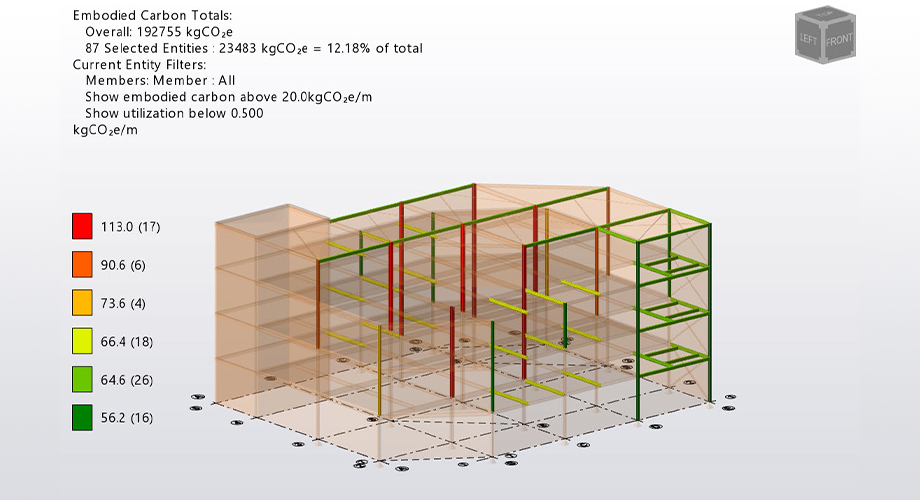 Ian: Of course, while this is all great in theory, it’s relatively meaningless if we don’t go on to communicate and share these design insights with the decision makers on the project. Communicating and tracking the carbon impact of decisions is a great way to demonstrate value to the client and educate the wider design team. Increasingly, with clients setting carbon targets based on policy and corporate commitments, the ability to deliver low carbon outcomes will be increasingly valued.

While engineers do some amazing work, we’re not necessarily good at showcasing this work and using it to help inform future decision making. Further, it is important to share our lessons with our fellow engineering community - a key pillar of the Built Environment Declares movement.

Stuart: When it comes to embodied carbon, given that it’s still a relatively new demand on the engineering sector, communicating and sharing our experiences, lessons learned and knowledge is key.

At Trimble, we understand this need for effective communication, whether that’s internally, with project stakeholders or within the wider engineering community. As well as being advocates for open BIM and interoperability, we offer specific collaboration tools, such as Trimble Connect and Tekla Model Sharing. 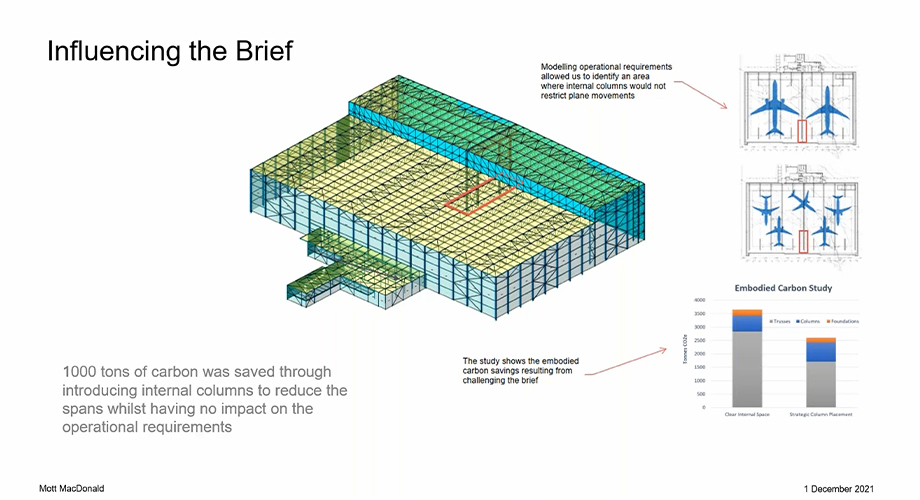 Ian: Reporting and recording is an important part of this wider communication topic. By having carbon data integrated within the 3D model, it makes it very easy to go back to report and record.

When it comes to reporting on a structure’s embodied carbon value, it’s important to communicate the figures in a way that means something and serves to highlight the real difference we’re making. For example, at Mott MacDonald, when it comes to reports, we ensure that we include the carbon figure for the project and the same figure in more relatable terms, providing context to the number – for example, 12,500 tonnes of carbon being equivalent to 7,000 return flights from London Heathrow to New York’s JFK.

Stuart: With our intelligent calculator tool in Tekla Structural Designer and the live connection between Tekla Structures and One Click LCA, engineers can easily generate data and produce detailed reports as the project progresses from design through to on-site construction and assembly. 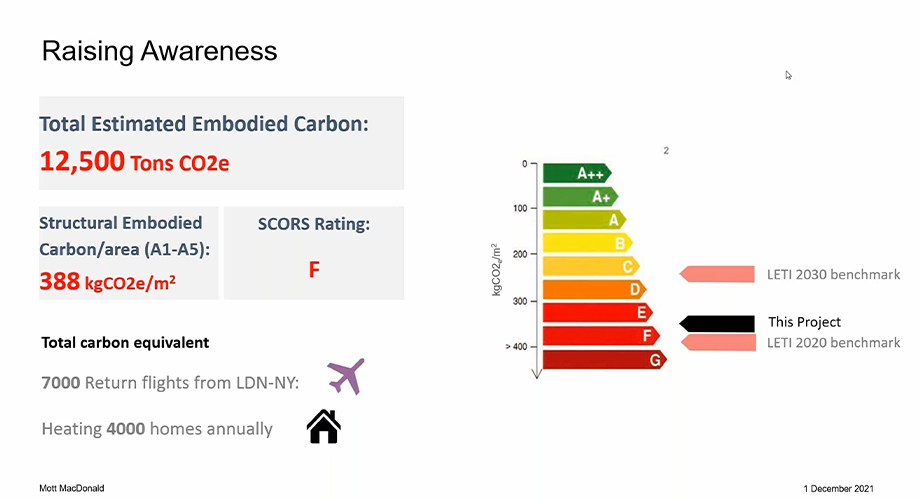