The company’s success is primarily based on the advanced technical tools it utilizes, to give it a distinct advantage in a competitive market.

A critical factor in Contromation’s success is Tekla, which is used in all of the company’s projects, allowing Contromation to help its clients to reduce costs and produce more efficiently.

When Contromation was asked to develop a pre-feasibility report on a copper processing plant in the Philippines, it turned to Tekla. The report required modelling an enormous plant that would cost an estimated A$220 million to build and which would have a planned throughput of 15 million tonnes a year. The plant would have stations for crushing, conveying, stockpiling, scrubbing, secondary and tertiary crushing, process floatation circuits and concentrate storage areas.

More accurate project estimates
The aim of the pre-feasibility report was to get a good sense of the costs involved in building the plant. Typically, these reports aim for an accuracy of 25 percent either way.

Edmund Anderson, the General Manager of Contromation, said that by using Tekla to produce more detailed models, the company was able to get the estimate to within 10 to 15 percent accuracy.

“We’re providing clients a smarter way to calculate capital costs, providing for greater financial control, whilst mitigating risk. Tekla provides excellent traceability when substantiating project quantities through our ability to extract data from the building information based model,” he said. 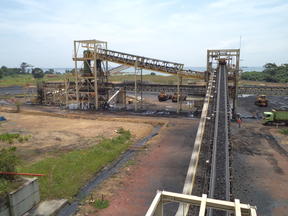 In all, it took about six to eight weeks to build the material handling systems and process models using Tekla, thanks to Tekla’s ability to reuse inventory when executing new modelling projects. “This passes value back to the client and that translates into fairly significant cost savings,” said Mr Anderson. “The client is then able to expand his business opportunity utilizing these models further by incorporating high-resolution animation and fly-throughs, all for the same cost as a traditionally designed 2D project.”

The study involved modularising the project so that each module could be built outside Australia, then brought into the country and assembled on site. This enabled the bulk of the work to be done in high value areas, thus substantially cutting down on costs. Said Mr Anderson: “We were issued 2D design drawings and we engineered a fit aligning current 3D inventory, executing minimal additional engineering. We then exported models from Tekla to 3D Max, producing animations of the intended final plant for the client.”

As well as helping to design the modules, Contromation also ensured that the construction timetable would not violate health and safety regulations, as safety in design is paramount to the success of every project. “With Tekla, we were able to import required crane models and execute lift studies, which provide an excellent platform for constructability reviews,” he noted.

While doing lift studies, Contromation discovered that a major crane and lift procedure would contravene health and safety requirements. Had the discovery been made in the middle of construction, it would have cost the client considerable money and time.

“By carefully re-assessing the construction methodology as well as the construction schedule, we were able to de-risk the lift and save the company several million dollars,” said Mr Anderson.

Perhaps one of Contromation’s most challenging projects involves Indonesian coal company Kaltim Prima Coal. KPC have a coal handing facility in East Kalimantan, a port facility where the coal is crushed, stockpiled and loaded onto barges. Contromation was called in to increase the throughput of the facility from 6 million tonnes to 9 to 12 million tonnes.

This was an especially challenging project because it was a brown-field project and required minimal downtime during the upgrade. Interestingly, Contromation had won the contract to do the initial concept design for the plant in Kalimantan prior to construction. However, an international group won the tender to develop the plant. 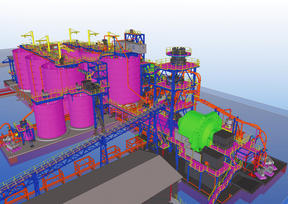 “He came back seven years later because the plant’s owners couldn’t increase the productivity of the plant as designed by Contromation during the initial concept for the plant.

This was due to minor changes in design by the international contractor, which had a major impact to future throughput.”

Because it was a brown-field project, the modelling involved boots on the ground too. “We had to model up the whole structure and then model in the new, upgraded facilities,” said Anderson. 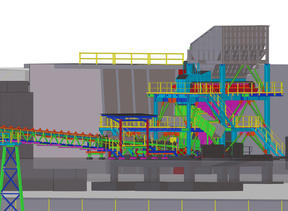