MLPL3 project: the multilevel car park in Pune is a multi-purpose building.

The project had very unique challenges right from planning and designing to the execution of the multi-level car park. The geometry of the project area along with the land profile were the two major challenges for the team. Besides that, the inclined grids and multiple uses of the structure at each level proved to be quite challenging.

“By using precast, we virtually enter the domain of production and assembly. And for that, we need tools potent enough to do extremely accurate detailing of the elements such as their geometry, connections, reinforcement locations, inserts, etc.”

“In case of the MLPL3 project, everyone involved was well aware of the complexities likely to be encountered and were certain that a 2D drafting software like AutoCAD will definitely not do the job, and that we could only trust Tekla - the 3D BIM software - to make this project a reality & a success.”

Precast India Infrastructures Pvt. Ltd. (PIIPL) - an initiative of Bhate Raje Construction Company Pvt. Ltd. - has gained recognition as one of the most trusted names for all IT sector & industrial building projects as well as for commercial complexes.

It was founded in 2010 with a mammoth production facility in Wade Bolhai, on the outskirts of Pune city in Maharashtra. PIIPL’s unique production facility is capable of producing various precast as well as pre-stressed concrete elements ranging from small parapet walls to huge slabs spanning 16m to 20m lengths. With its automated steel cutting & bending facility, versatile production yard, and independent installation division with high capacity tower cranes and mobile cranes, PIIPL has emerged as the leading choice for precast production in the construction industry. 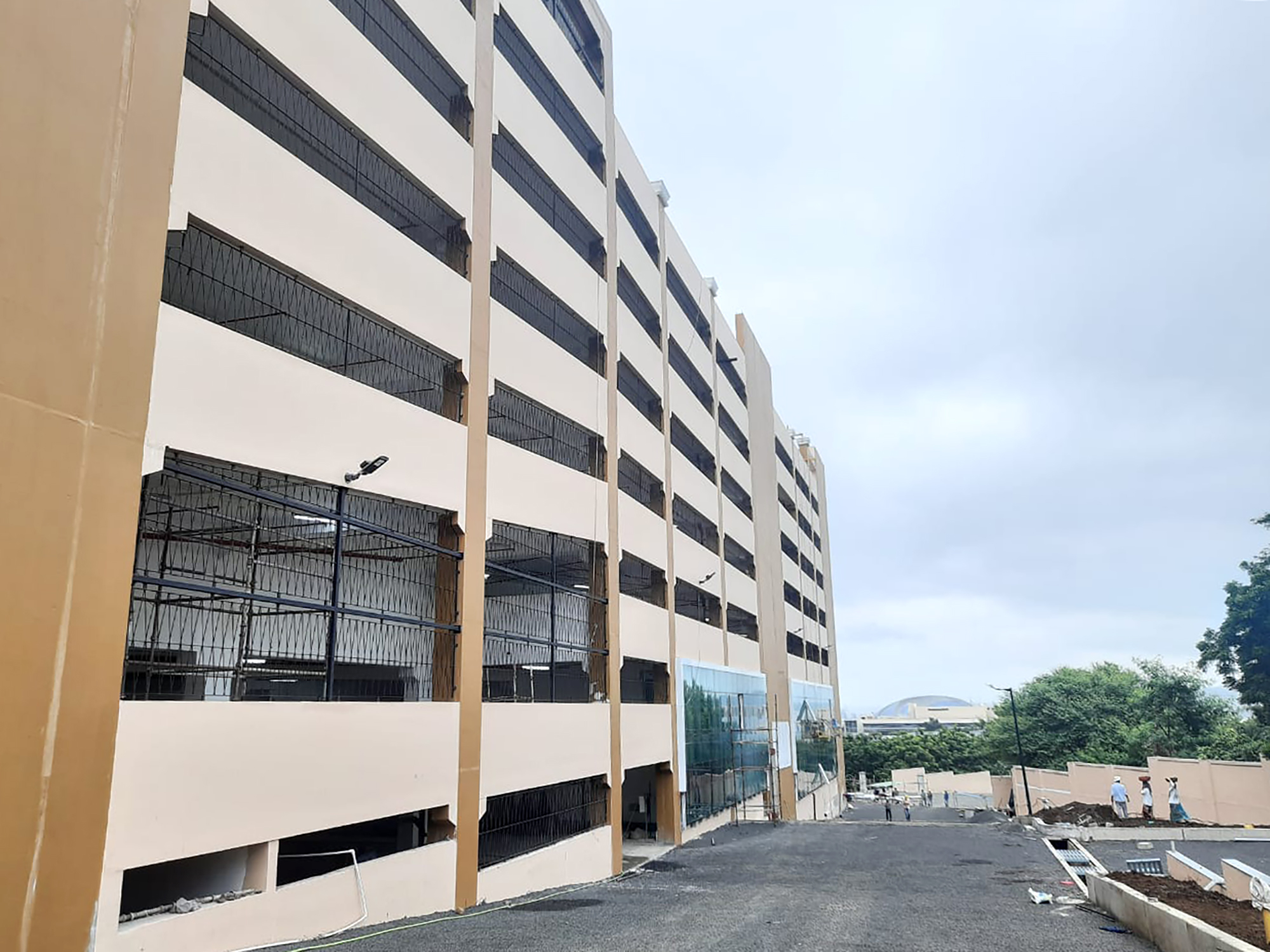 The entire superstructure is of precast and prefabricated concrete and was designed for dynamic vehicular loads.

The entire superstructure is of precast and prefabricated concrete and has been designed for dynamic vehicular loads. A very wide variety of precast elements were used in the project such as retaining and shear walls, columns, hollow-core, double tee and solid slabs, pre-stressed and non-pre-stressed beams, spandrels, non-load bearing walls, etc. 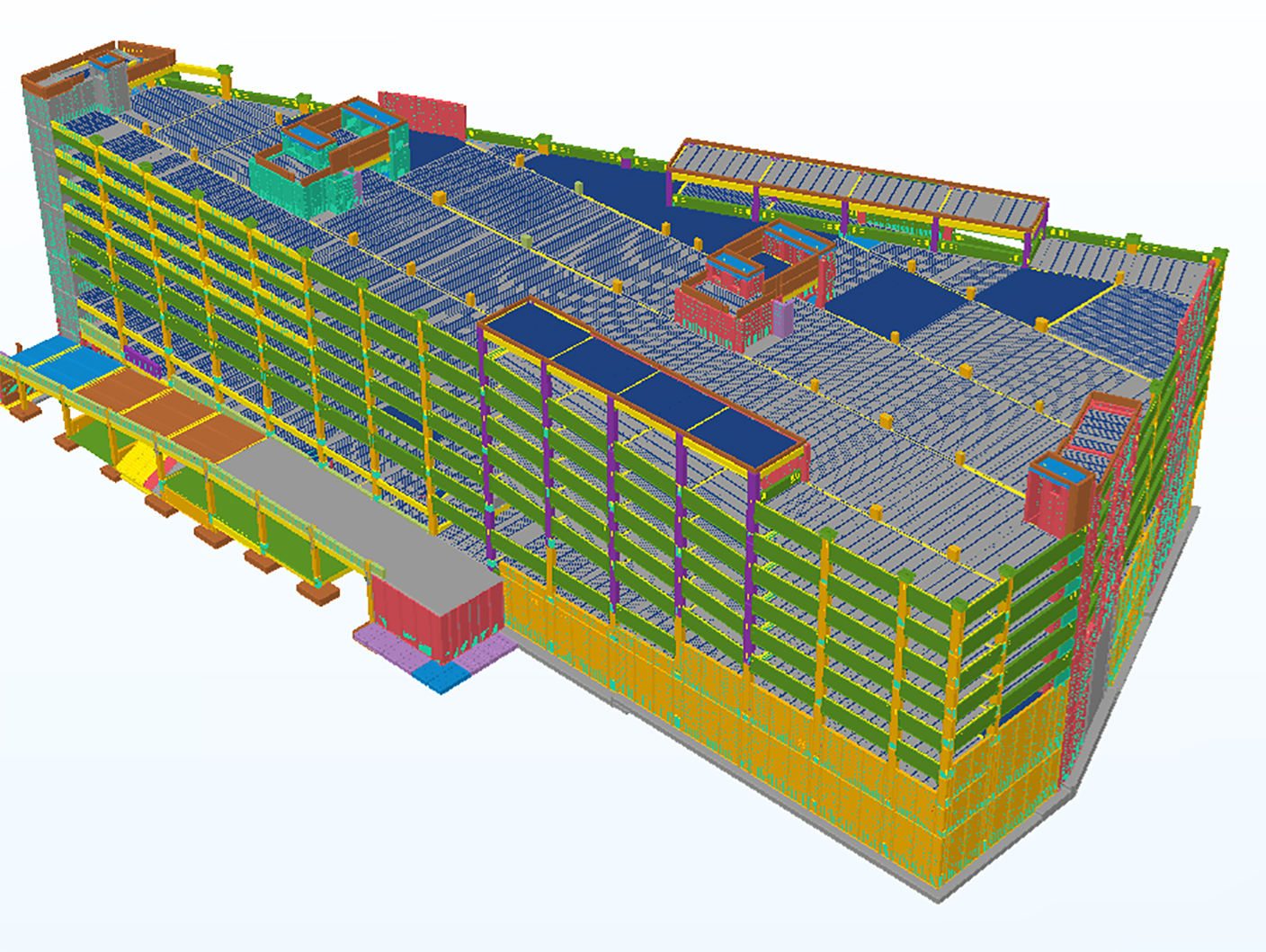 With Tekla, concrete modeling and detailing were very easy.

The project team at PIIPL faced some very unique challenges right from planning and designing to the execution of the multi-level car park. The geometry of the project area along with the land profile were the two major challenges for the team. Besides that, the inclined grids and multiple uses of the structure at each level proved to be quite challenging. Pre-stressed beams and hollow core slabs ranging up to 12 meters were used to reduce the number of columns. Further, the column design was also a critical part as resting beams were not orthogonal to each other.

After the conceptual planning and engineering, the project execution and completion within the scheduled timeline was the next major hurdle. More than 6,500 precast elements were produced, transported and installed, from scratch, in approximately 10 months. The executor had to complete the robust work within the affirmed deadline and any error or frequent reworks could have resulted in an unaffordable delay.

Some of the other complexities involved in the project were the contour differences, boundary retaining walls, integration of the underground water tank, the difference in levels for restaurant and parking, various ramps, inserts of sleeves, splitting of elements due to weight constraints, slopes in terrace affecting element lengths, heights, etc. 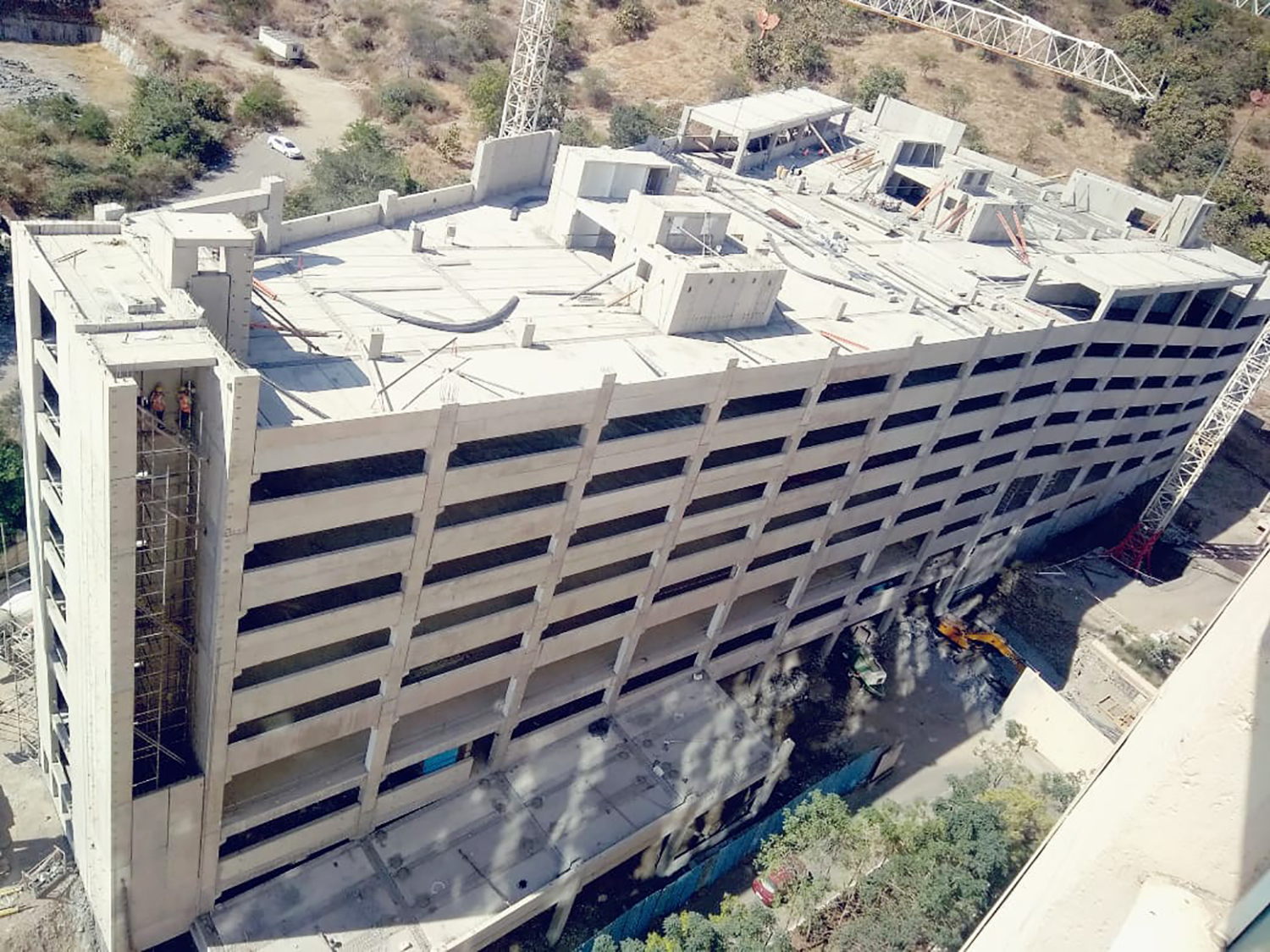 More than 6,500 precast elements were produced, transported and installed in approximately 10 months. 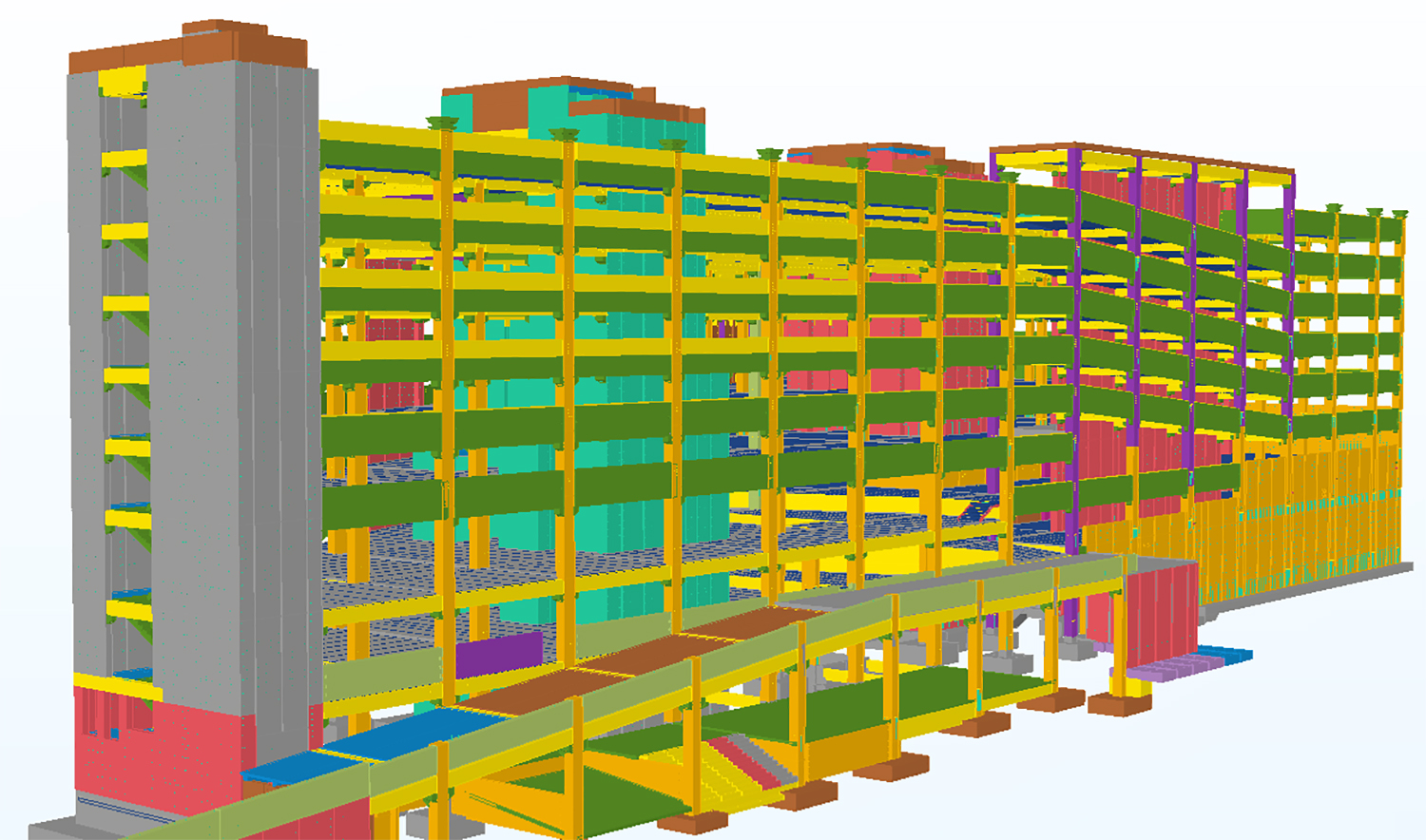 At any given time, several detailers, modelers and checkers were working on the model preparing various details, drawings, etc.

Solution: the most versatile & robust software for precast construction

With Tekla Structures, the PIIPL team was able to produce a large number of precast elements, address critical geometries, implement MEP requirements and a lot more, quite easily and well within the specified project timeline.

The software empowered the executing team to overcome numerous technical challenges rooted in the project and derive a host of benefits such as: 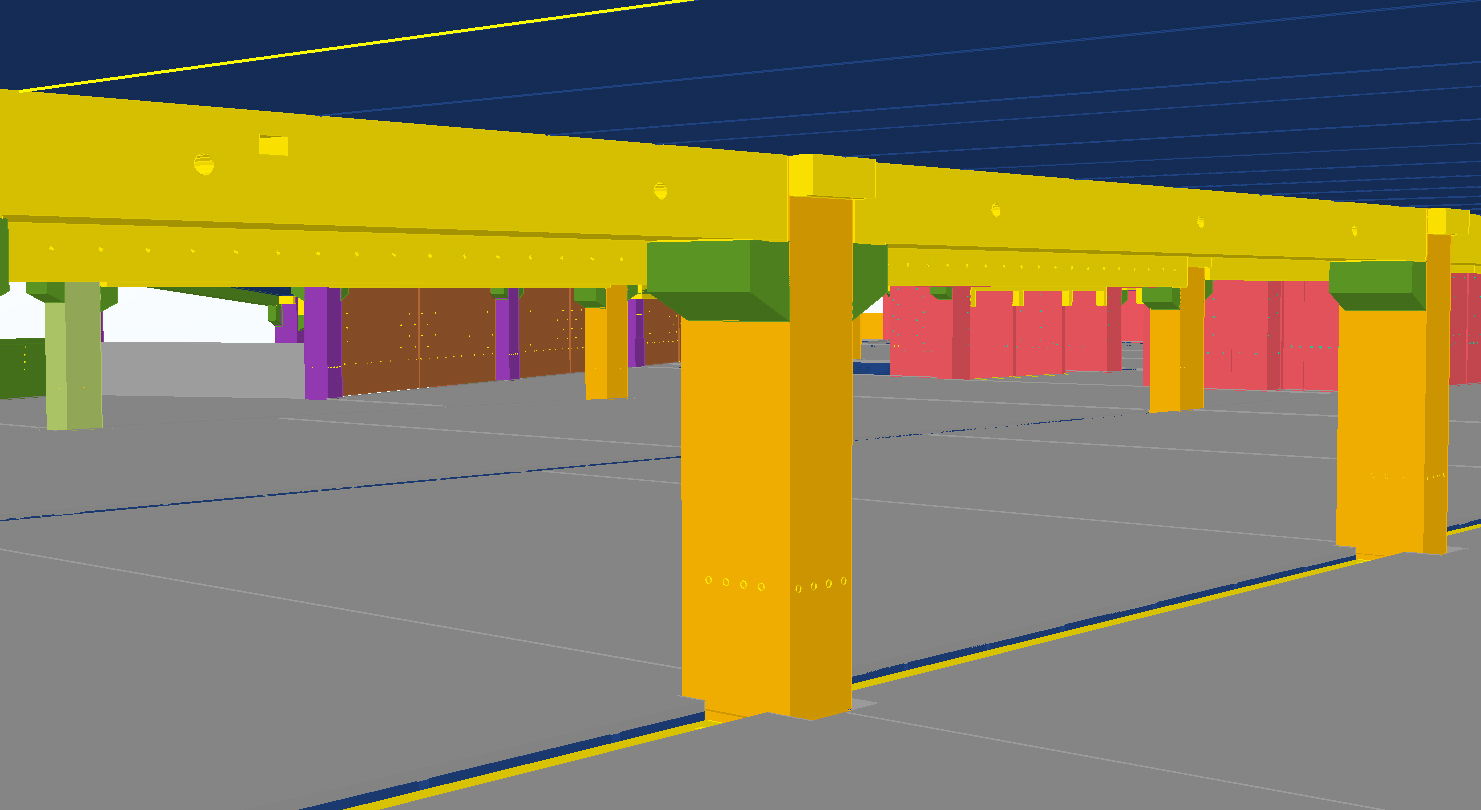 The readily available custom components in the Tekla Warehouse enabled the PIIPL team to modify the model as per the design and project requirement.

Tekla - the facilitator for anything precast

Tekla proved extremely helpful in many aspects across the whole lifecycle of the project like the autogeneration of production drawings, the bar bending schedules related to it, the detailed blowouts, etc. This advanced constructible BIM software upheld the entire project, from conceptual planning of the buildings and infrastructure to fabrication, construction, and maintenance.

With its designing, detailing, and information management capabilities, it enabled the team to identify & eliminate the critical issues (clashes) in the entire process much ahead of the on-ground or on-site construction thus saving huge amounts of time and cost by eliminating rework & material wastage.

Last but not the least, various small tools like the floor layout, stair component, etc., were of great help in further enhancing the productivity of the team.

“Although acquainting new team members to this platform takes a little time, the available tutorials and self-help videos were of great assistance and the payback in project delivery far exceeds the initial effort.”

This article was published in CPi Worldwide magazine #6-2021.