The Kirri-Tikkakoski Road project is underway on Highway 4 near Jyväskylä, Finland. The project includes 29 different bridges that were designed and implemented entirely BIM-based using Tekla Structures software and Trimble Connect collaboration tool. Comprehensive training for all users of the models, using Building Information Modeling extensively, and clear common practices accelerated the design process by between 20 and 25 weeks. This resulted in significant cost savings, improved quality, and a longer lifespan for bridges. The Kirri-Tikkakoski Road project received special recognition in the Finnish and Baltic Tekla BIM Awards 2020.

The Kirri-Tikkakoski Road project includes the building 17 kilometers of new highways, 25 kilometers of roads and more than 25 kilometers of light traffic lanes, six interchanges and over three kilometers of sound barriers. The total number of roadways to be built totals over a hundred kilometers. The estimated total cost of the project is 139 million euros.

Project planning began in 2018 with construction starting in the spring of 2019. The entire project is slated for completion by the end of 2023.

”The challenge of the Kirri-Tikkakoski project is its enormous scope. It is one of Finland’s largest single infrastructure contracts, which will be constructed as a single project,” says Project Manager Jarmo Niskanen of the Finnish Transport Infrastructure Agency.

29 bridges for vehicles and light traffic will be built as part of the project, with six bridges part of interchanges being the largest. Across the project, several different types of bridges will be constructed: 12 pre-stressed concrete cantilever bridges, five reinforced concrete cantilever slab bridges, one glulam girder bridge, four tubular steel bridges, three steel vault bridges and three unreinforced type bridges. In addition, the design includes a concrete bridge which will be repaired as part of the project.

“Because there are so many bridges in the project, we decided to produce structural solutions that can be replicated from one bridge to another. We designed infrastructure that is high-quality and will deliver a long service life,” says Niskanen.

When designing the bridges, we took possible future needs into consideration, for example, should the road be widened, or the speed limit increased up to 120 km/h," he continues.

We designed the project using the “Design-Build model” - including the initial development phase. The initial development phase lasted nine months, during which, in addition to all other structures, structural solutions for each of the bridges were planned. Based on the plans, the contractor was able to calculate the total quantity of materials required for the bridges. Based on these quantities, cost estimates for the bridges were calculated.

”It was important to agree on the design principles prior to the start of the construction phase. At that point, there is still time to consider and explore different options. For example, we can make revised estimates based on the cost of proposed changes. The Sweco Structural Engineering team, which was responsible for the design of the bridges, exceeded our needs and expectations, both in the degree of cooperation and the development of working methods,” explains Niskanen.

Using Trimble tools in the project was part of the selection criteria. The requirement was that BIM is used in all design work and that the customer had the right to view the model during development.

Niskanen has previously used bridge information models for several projects:  “With each new project, we have aimed to increase the use of data contained in the models across different stages of the project. My goal has always been to take what was a new process or technology in our previous project and make it a minimum requirement for the next one.”

Agreeing on a common set of rules, and ensuring mutual understanding from the start is key

Sweco Structural Engineering Group Manager Juha Litmanen and Chief Modeler Timo Nurmimäki are both experienced users of BIM. They understood that in such a large project it was an advantage for all project participants to use the federated data model(*) in the same way.

“First we invested in developing common guidelines and templates. Then we introduced the use of the BIM to ten key people, and freely offered help through open communication in Teams meetings, and then continued discussions over chat and email. That’s how we made sure that everyone involved in the project was working together right from the start,” says Nurmimäki.

Sweco understood through past experiences that the use of traditional drawings prevents fully using the capabilities of the BIM model. In previous projects, they had reduced the use of drawings, but a completely paperless project was not possible at that time. Now was the time for a change.

”We agreed across parties that Tekla's building information models and Trimble Connect would be the source of all construction information. We had one general printed drawing at our disposal, but all other information about the bridges was centralized within the model. Inspections and approvals were conducted in it and all the data was taken from it in the construction phase. It represented a big change,” Litmanen rejoices. 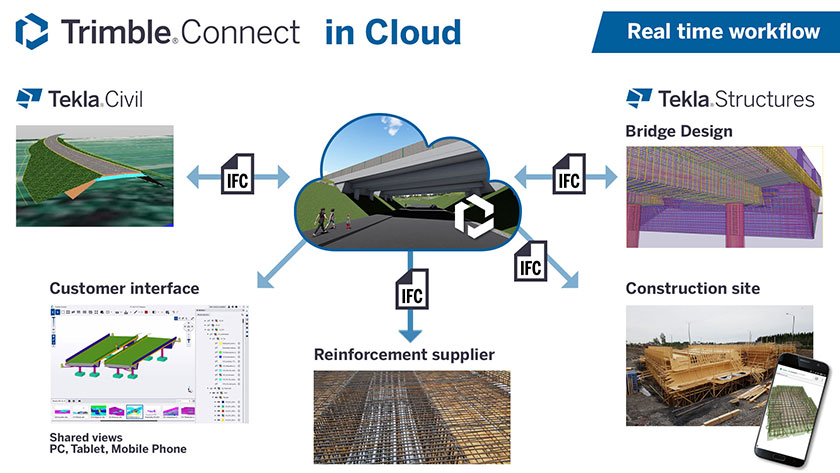 Jaakko Taipale, Project Manager for the main contractor Destia, is pleased with how extensive use of the information model has streamlined the process.

“For external bridge plan reviews and approvals, and for the Finnish Transport Infrastructure Agency’s process, the Tekla model serves as the basis for approval. In the past, if errors were found in the plans, a new set of drawings had to be created each time to complete the inspection process. The entire contract process from design to construction with approved plans was significantly accelerated when the model was fully utilized. In addition, the number of errors in design data and construction has been significantly reduced by using one model as the basis for all data.”

For the bridge project, the information model constantly evolved creating a model which the Sweco team developed to become even more user-friendly. This led to easier maintenance of the data contained in the model and more efficient and logical retrieval of that information.

”We strove to use Tekla's model as widely as possible. Inspection processes were conducted in the model from start to finish. Additionally, payments have been driven by the actual model production and model-based quality documentation. Approvals for the ‘quality payments’ are based on information available in Trimble Connect. Also, material inspection at the completion of the contract, which used to represent months of work, is now done in real-time within the model,” Niskanen says.

Additionally, we used BIM during the production of bridge reinforcement. The Lithuanian P-Group was eager to use it, and Sweco implemented a tool for the data model that transferred reinforcement data from the model directly to production robots. In this way, going through the checklist of reinforcements and possible errors in the lists were avoided.

Estimates show that the BIM-based work has cut twenty working weeks from the project timeline. In the design phase, the use of the model has saved approximately EUR 150 000, and up to EUR 1.5 million during construction. This represents a significant amount of the total budget. Adding together the entire supply chain, using the information models resulted in a 10 percent savings versus a more traditional way of doing things.

“For the customer, this means first and foremost improved quality but also real-time reporting on that quality. In this way, we can immediately react to any sub-quality work – while it is still easily accessible and doesn’t require disassembly to remove or repair. The savings that we have realized by streamlining the design process has been invested to improve the overall quality of the project. Better quality bridges mean longer service life. I hope that in 20 years when I’m driving on this road as a pensioner, I can say that we made a pretty good road,” concludes Niskanen.

(*) A federated model is a combined data model or building information model that has been compiled by merging several different models into one (or importing one model into another). Models originate from a range of construction disciplines - architects, structural engineers, building service engineers, contractors, subcontractors and suppliers. These models can be uploaded to a shared data environment known as the Common Data Environment (CDE) e.g. Trimble Connect,  where they can be accessed and combined.