634 meters high Tokyo Sky Tree is the world’s tallest free-standing tower for digital terrestrial broadcasting. Japanese traditional sense of beauty and state-of-the-art engineering have been integrated to its design. The tower will become a new landmark in Tokyo and create memorable views from the Sumida river and nearby spots. Such views are expected to be called a ”Landscape beyond Time and Space“.

A testament to the versatility of BIM

Erecting a 634-meter ultra high-rise structure has never been attempted in Japan before. No companies had real experience in building such tall structures; thus, the construction of this tower posed a significant technical challenge to Obayashi. The structural steel columns of the tower are diagonally jointed at different angles, and their shapes differ from one another. Under these stringent conditions, engineers were required to solve the kind of problems that they have never experienced in past projects.

Considering the requirement of accurate construction and preliminary clash detection, Obayashi decided to deploy a 3D design system prior to starting this project. After reviewing several programs for structural steel design, they finally made a decision to adopt Tekla BIM software. Besides, Tekla was in use by main fabricators working on this project and had been applied to this kind of special structures worldwide.

Tomoya Kaneko, Senior Research Engineer at Obayashi, expresses his strong expectations of BIM. “What general contractors utilize in the 3D models created by fabricators is a new data flow in the construction industry. Tekla Structures not only defines every required unit (from bolts to large assembly units) but also figures out all weights and the centers of their gravity positions automatically. Tekla BIM software enables the creation of a highly detailed model that makes it a suitable tool for the construction site. We will definitely continue researching this kind of utilization of BIM.”

The 3D building information model provided a reliable representation of the actual building, and therefore it was used for the owner and design supervisors to check the feasibility of the design rationale and to clarify construction planning. The model incorporated not only the construction geometry of the complex main structure but also the smaller pieces used for work in high places, such as maintenance scaffolding and ladders. Model simulation ensured safety during construction, and it was used for finalizing proper positions and shapes of all elements.

Temporary pieces and steel members holding equipment, such as the lighting and broadcasting systems utilized in subsidiary work, were also included in this model. Obayashi was able to smoothly receive an approval for the final design in an early stage of the project by describing all the joints based on its detailed model. Model simulation also made it easier to understand the geometry of the tower and the procedure to erect the structural steel in each construction phase. Furthermore, the model was useful not only for sharing information between the project’s participants but also to explain the project to the community and residents near the tower.

In general, drawings have been the main communication tool among fabricators, design supervisors and construction managers. However, the Tokyo Sky Tree project chose the building information model as an information sharing platform. The model played a major role in terms of boosting collaboration efficiently, visualizing the plan, engineering inspections, and construction planning.

From the initial stage of the project, a regular meeting of the design supervisors (Nikken Sekkei), the construction managers (Obayashi), and the fabricators was held every week, and they reviewed the progress based on the model. If there were concerns, all of the participants could understand the concerns at the same level and then work together to resolve them using a procedure based on the model.

Various information combined into one model offers the advantage of being able to spot potential problems more easily. Matters that can not be checked on the engineering drawings can be found in the model. The model can be an indispensable tool to share and integrate information at every stage for high-quality construction of highly complex, large-scale projects like the Tokyo Sky Tree. BIM, in this case, promoted a smooth project flow and allowed Obayashi to visualize the construction plans and to eliminate problems by simulation as well as to prevent conditions that could have caused extra work and work delays.

When corrections were carried out by the fabricators after the weekly meeting, the model data was converted to files for viewing on the World Wide Web. Then the data was sent by e-mail to the planning supervisors at Nikken Sekkei and Obayashi. The corrections were then confirmed by both parties. Simulating possible changes by sharing modeled information enabled the constructors at the site and the fabricators to respond quickly to them. The model was also used by the administration and the procurement departments, collaborating partners and by an onsite office within Obayashi to explain the processes. The Tekla model with added date information was used to check erection of the tower at the site.

”Tekla Structures arranges all parts attached to the tower in a 3D model. The model was repeatedly used for simulation of clash detection, for example, which eliminates the need for corrections at the site and enables the tower to be constructed without defects or problems,” says Yoshikuni Nagano, Manager for Construction at Obayashi, on the benefits of introducing BIM to the project.

Since we self-perform many different trades and disciplines, it just makes sense that we should know how th... 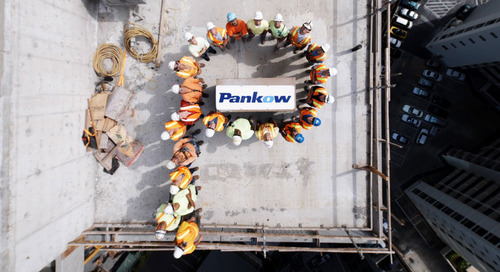