For over 55 years, LeMessurier has provided structural engineering services to architects, owners, contractors, developers and artists. Led by the example of legendary structural engineer and founder William LeMessurier, LeMessurier provides the expertise for some of the world’s most elegant and sophisticated designs while remaining true to the enduring laws of science and engineering. Known for pushing the envelope of the latest technologies and even inventing new ones, LeMessurier provides solutions responsive to their clients’ visions and reflective of their experience.

An early adopter of technology to improve their designs and workflow, LeMessurier put its own talent to work in the eighties to develop a software solution that did not exist commercially at the time. Their early application adopted the concept of Building Information Modeling (BIM) long before it emerged decades later.

While LeMessurier’s proprietary tool had evolved over three decades into a powerhouse of capability, the decision to evaluate commercial structural design tools was predicated on the looming effort required to modernize its software to leverage emerging platforms, support normalized data structure integration and keep up with code changes.

After a lengthy and thorough comparison of commercial tools that would “fill the shoes” and stack up to the company’s proprietary tool, LeMessurier chose Tekla Structural Designer for its rich capabilities that addressed all of their workflow needs. According to Derek Barnes, Associate at LeMessurier, ” Tekla Structural Designer offered the most features and the best integration of all the products we tested. They also offered us the ability to work closely with their development group to ensure we were getting the most out of the software.”

One product, one interface, one model

From Schematic Design through Construction Documents, Tekla Structural Designer allows LeMessurier engineers to work from one single model for structural analysis and design, improving efficiency, workflow, and ultimately saving time.  “Our engineers are working more efficiently because they don’t need to switch between multiple software packages for concrete and steel design. Tekla Structural Designer offers better integration of multiple materials than we have seen in any other product,” said Barnes. 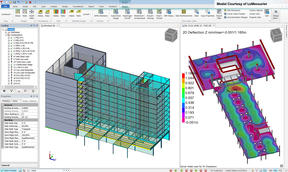 “Tekla Structural Designer gives us multiple analysis sets to pull from, which gives us lots of control. Most programs don’t have the capability to do FE and grillage chase-down. For the design of beam supported concrete slabs, Tekla Structural Designer allows us to separate the slab stiffness from the beam stiffness, so if we choose to we can design the beams without considering the influence of the slab. In the same model we can use a separate analysis set to review the floor system with the beams and slab engaged,” said Barnes. 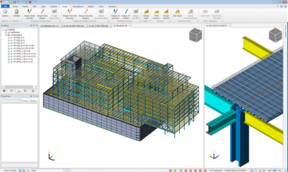 Tekla Structural Designer was developed specifically to maximize collaboration with other project parties, including technicians, fabricators and architects. Its unique functionality enables engineers to integrate the physical design model seamlessly with Tekla Structures or Autodesk Revit, and to round-trip without compromising vital design data.

Tekla Structural Designer at work: The Hub on Causeway

Positioning a large scale mixed-use development next to an active arena, a below grade parking garage, and an interstate highway, and bridging it over two active subway tunnels makes planning, phasing and engineering paramount. Currently under construction, The Hub on Causeway Project will be the final piece in the puzzle that is the site of the original Boston Garden.

Despite being new to the software, LeMessurier decided to use Tekla Structural Designer for significant portions of the project. “Relying on a new program for such a big project was obviously a risk for us, but with the potential for time savings and other efficiencies, we jumped right in with Tekla Structural Designer. It forced us to get familiar the software very quickly.”

“Tekla Structural Designer allowed us to design the bulk of Phase 1 in a single model,” said Barnes. The project incorporates both concrete flat slabs and composite concrete and steel floor framing.  “Tekla Structural Designer has the ability to calculate effective widths based on the physical model which is a big time saver,” said Barnes. “On this project, the integration with Revit, along with the composite steel design features, enabled us to work more efficiently. Adding the ability to do concrete design in the same model was a bonus because we had both construction types in the same building.”

“Tekla Structural Designer helped this project run more efficiently, and in the end it was a positive experience,” said Blanchet.