A complex bridge project is a labor of love for a newly minted Polish engineer.

The fields of architecture and structural engineering are notoriously difficult. To take these on as a profession means years of hard work and intensive study. The challenges are magnified exponentially for those truly dedicated individuals who go on to earn a master’s degree, which means even deeper study and the added demands of a master’s thesis project. 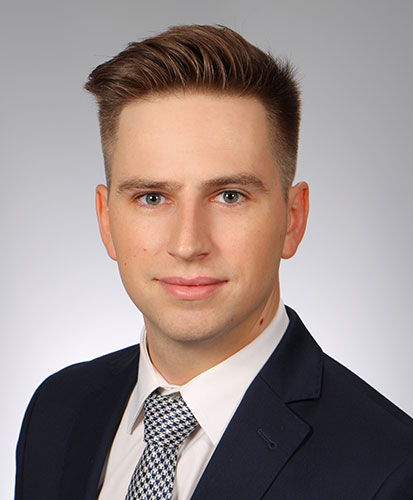 Demonstrating the knowledge and skill that the student has gained over his or her studies, a master’s thesis is the final hurdle to obtaining the coveted degree. For Mateusz Łapiński, who received his master’s degree in engineering from Warsaw University of Technology, his master’s thesis subject was a complex extradosed bridge. It was designed as a response to an actual need in his home country of Poland.

An actual 44 million Euro bridge that began construction shortly after completion of Łapiński’s master’s thesis uses a similar extradosed design. Łapiński’s project was the student category winner in Tekla’s 2020 BIM Awards competition in Poland, and a finalist in the Tekla Global BIM Awards.

By fully embracing the latest technologies - including Tekla Structures - Łapiński engineered a complex structure that isn’t just strong and beautiful but also constructible. For his project, Łapiński created a complete, constructible plan on his own, which contrasts with the actual project currently under construction which took an entire team. This dramatically demonstrates just how powerful the right technology can be when it comes to making design work simultaneously better and more resource-efficient.

“Due to the complex geometry of the bridge, the project was time-consuming even with advanced technology. But Tekla definitely sped up my work. There are lots of components available in the Tekla library, and the user can create and add their own as well,” explains Łapiński.

“Also, it offers a lot of features that save time and effort. For example, it's easier to create multiple similar drawings rather than recreating the wheel each time. And when a product approaches the construction phase, the Trimble Connect tool allows IFC formats to be exchanged between the various project teams and trades during coordination meetings.”

Starting with a parametric 3D model of the bridge, Łapiński seamlessly brought together calculations from SOFiSTiK with Tekla Structures bridge information modeling using custom algorithmic scripts created with Rhino Grasshopper. This allowed for adjustments made in one program to transfer data and update the model in other programs without hours of tedious recalculations made by hand. Without this high level of automation, it would have been extremely difficult for such a complex project to be developed by a single person.

When discussing the importance of advanced design and modeling tools and how architecture students should prepare for their career, Łapiński says that “...at the beginning of the engineering adventure it isn’t necessary to know how to code. The focus should mostly be on first understanding the structure and then using sophisticated tools to make rough calculations more accurate.”

But Łapiński continues with an observation that the increasingly complex shapes in modern architecture often create a need for custom solutions that can be done with open APIs such as those supported by Tekla. “It is impossible to create universal software that will solve every design situation, so I recommend that everyone consider learning programming sometime during their career,” he says. His estimate is that within 15 years all architects will need to have at least some skills in writing scripts to harmonize different solutions.

A passion for design and engineering

A unique feature of Łapiński’s bridge design which was modeled using Tekla Structures is an inspection trolley that can traverse the length of the bridge. This feature would allow for a detailed examination of the structure to aid maintenance and proactively address any maintenance issues found on the bridge. 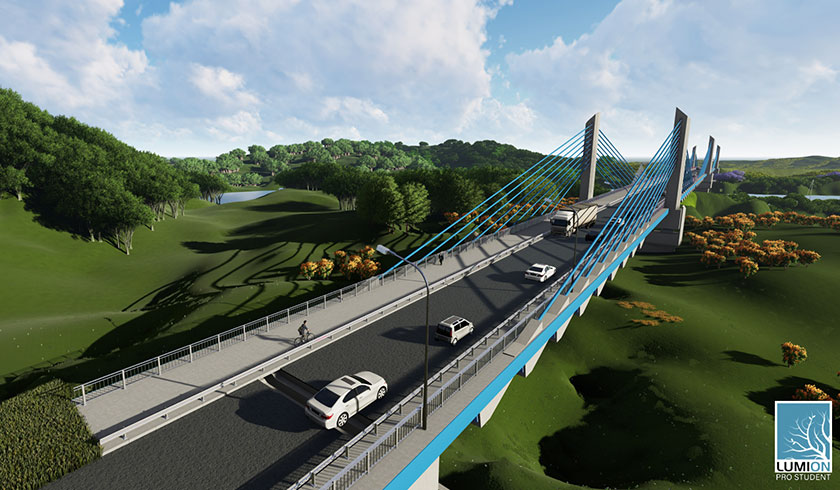 The actual bridge currently under construction is slated to replace an old, structurally deficient bridge built in 1943, which today is too narrow for the volume of traffic that it now handles. Compared to the old span, the new structure is almost 50% longer (600m vs. 407m) and more than twice as wide (17m vs. 7.5m). When completed, it will allow for two lanes of vehicle traffic as well as bicycle and pedestrian lanes.

Łapiński keeps an eye on the ongoing construction via a website each day. “[Right now] they are constructing the pylons, and the most exciting moment is soon to come – the prestressing of extradosed cables. To me, this is something unbelievable. I can’t imagine how the original designers feel right now. I hope it is something that I will experience someday.”

And when asked why he decided to take on such a massive, complex product for his thesis, Łapiński explains that “I am passionate about prestressing structures and I thought that this project represented an ideal connection between my two loves, bridges and prestressing.”