The Peters Bridge, designed by Petr Vicena, was entered in the Construsoft BIM Awards 2019 as a student project. Currently, Petr is in his third year of study at the Secondary School of Civil Engineering in Valašské Meziříčí, with a specialization in Building Construction. 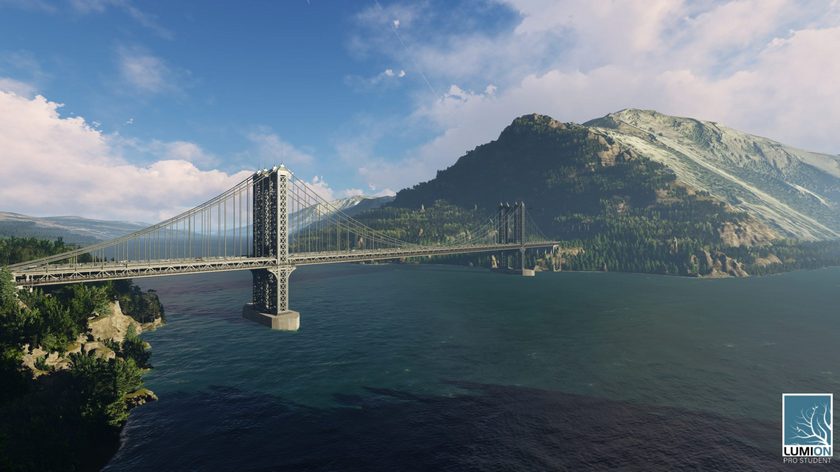 The 3D bridge model was constructed as part of the work within a civil engineering subjects group concerning structural mechanics and 3D BIM modeling programs. Petr used Tekla Structures software for his bridge design, with Lumion used for the final rendering and visualization. Petr modeled the bridge during the course of the entire school year. He took several expert consultations and worked with information from various sources, e.g. historical documents and photographs of various classic bridges. He has a particular interest in steel structures and, above all, bridges. The Manhattan Bridge was one of his inspirations. A great part of his personal time went into working on the bridge design.

Petr’s model is a steel suspension bridge. The bridge construction system consists of four main carrying cables, which transfer the weight of the bridge deck by regular suspensions cables into two pylons. The carrying cables are mounted on the pylons saddles and anchored at the ends in massive anchor blocks. The bridge deck consists of four main trusses, crossbars, sidebars and bracing. The deck has two levels. The span between the pylons is 408 meters, the width of the bridge is 43 meters, the height of the pylons is 110 meters, and the height of the top viewing platform is 105 meters. The main carrying cables are 600 mm in diameter. The weight of the steel structure is 54.4 thousand tons (54376587 kg). There are two pedestrian walkways, 7 road lanes, and 4 subway lines at the lower level of the bridge deck. The bridge model isn’t perfect, and not everything is finished to the last detail. But that wasn’t Petr’s intention.

By working on the model, Petr Vicena gained a great deal of new information and knowledge including steel structures design, static functioning of suspension bridges, the spatial layout of the bridge deck -  including varied sorts of traffic on it, and much more. Petr has learned how to use Tekla Structures 3D BIM program to detect collisions and generate drawing documentation and material lists. He has also learned to export data to visualization programs and get slideshows using generated images, videos, and panoramic photos. He can also bring his bridge into a virtual/mixed reality environment and Trimble Connect. By working on this project, Petr simulated the construction of a large-scale steel bridge, which, with the perspective of his future university studies and later practical application, was a very interesting and informative experience.