Skanska builds a complex of four office buildings just three kilometers from the Helsinki city center. The company completed the first eight-floor tower, the headquarters of Skanska Finland, in 2012. the total scope of the project encompasses 33,000 floor square meters, and the second tower is also completed within the same year. A three-story parking garage is located underneath the office floors.

As Skanska is both the client and the main contractor in the project, it has had a great opportunity to implement the project exactly according to its own wishes. Skanska has previously utilized information model-based construction in its residential building projects, but this is the company’s first office building project where the limits of building information modeling have truly been put to the test. 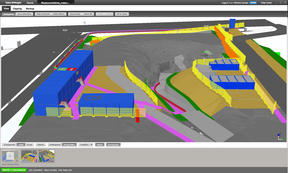 As the client, Skanska has required all designer parties to create their plans through modeling, starting from the geotechnical model. For production, a refined information model (called the production model at Skanska) was produced from the designers’ models. This model is based on a structural model created with Tekla Structures, which includes cast-in-place structures with their reinforcements, detailed precast units and the steel frame. The architectural and building systems models have been integrated to the Tekla model in the IFC format. The geotechnical model includes existing pipes, wires and tunnels as well as the required excavations and future underground public utilities. The initial geotechnical model also includes the laser-scanned existing ground surface.

“Of course, there is a lot of work in integrating the models from the different fields of design. However, it pays itself back in reduced rework at the construction site and more efficient work management,” says Jussi Ranne, Production Unit Manager in Skanska Construction Services.

The architectural and building engineering models have been updated when needed, the structural model every two weeks. The real-time structural model has been used to monitor the progress of the design work. The project part to be built next must be fully designed before the construction is started.

The designers’ models were used to produce a model containing production data using Tekla Structures Construction Management software. This model has been widely used by different parties at the construction site.

“The production model has been my everyday tool at the construction site,” says Riina Koskinen, Production Engineer. 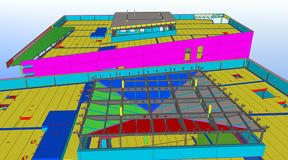 An information model for each construction phase

The next phase was the construction of the underground floors. The production model contained the cast-in-place frame and the installation of precast units. The frame erection for each office tower forms a separate phase, so a separate production model was naturally created for each of these. The refined schedule for the construction phases with their section and floor divisions were imported into Tekla software from the Vico Control software.

The structural components of the model were grouped using Tekla model organizer, and the grouping has been maintained throughout the project. With the help of the grouping, 4D simulations of the schedule have been made. Once a week, views of the weekly 4D-construction schedule were printed for the workers’ coffee room and the information screen at the site office.

Monitoring of frame erection schedules is model-based, and the actual installation date can be found for each structural component. When the building information model is available, there will also be users. Plumbers and frame foreman have used the screenshots as reference for the installation work. A junior site foreman has used the model itself, as finding the correct detail from drawings printed on paper is slow and troublesome.

When using the model, the user can find the desired section quickly with the zoom and cut functions. Contractors and designers have communicated with each other using the model and corrected defects in the plans.Precast unit lists were printed for the precast concrete factory from the model to display the installation order and delivery dates for the precast units. Quantity checks have been made on precast unit deliveries with the help of fittings and reinforcement quantities easily obtained from the model. When using traditional means, quantity checks have not usually been done with such precision. The surveyor has also had the visual assistance of the model. Use of the model geometry as the initial data for staking out has been tested. Of course, the model is also useful for fine adjustments of quantities and information. 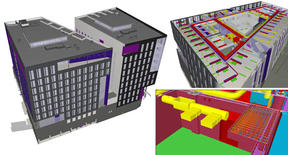 The model has also been used for planning logistics and work safety at Manskun Rasti. During frame installations, the materials to be lifted to each floor were modeled to scale. For the storage of brick stacks, a suitable placement was calculated using the model to avoid exceeding the load limit per square meter calculated for the floor. At Manskun Rasti, the falling protection modeling and 4D visualization were piloted together with VTT Technical Research Centre of Finland.

The procurement department has also utilized the building information model. Negotiations with subcontractors have taken place in front of a large TV screen, and the model has been turned around on the screen to view it from different angles and to fully explain even the most complex details. The visual nature of the building information model helps subcontractors who speak different native languages to understand the target and the desired end result. BIM is a universal language.

“The building information model helped both Skanska and the contractors to understand the difficult structures in the quantification and tender phase. Everyone easily got a comprehensive understanding of what the client was buying. The model also made pricing easier for the contractors,” said Seppo Vihtilä, Purchasing Manager.

Quantity surveying using the model is much easier than by calculating by hand, and there is less room for human error. At the same time, there is less need to prepare for errors using margins, which saves money and reduces waste.

At the Manskun Rasti construction site, a building information model is utilized for all preparation work that can be done with a computer. This saves the time of professionals for work where their expertise is particularly needed. 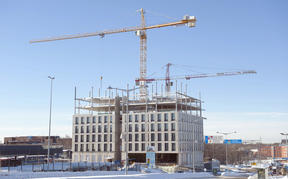 The objective is to improve productivity, eliminate waste and decrease disturbances during the production.

BIM is here to stay

The building information model has arrived at the construction site to stay. Skanska has already taken the next step and ordered tablet computers for foremen so that every detail does not need to be checked at the trailer.

“In the future, the building information model will be an everyday tool at all construction sites,” predicts Jussi Ranne.