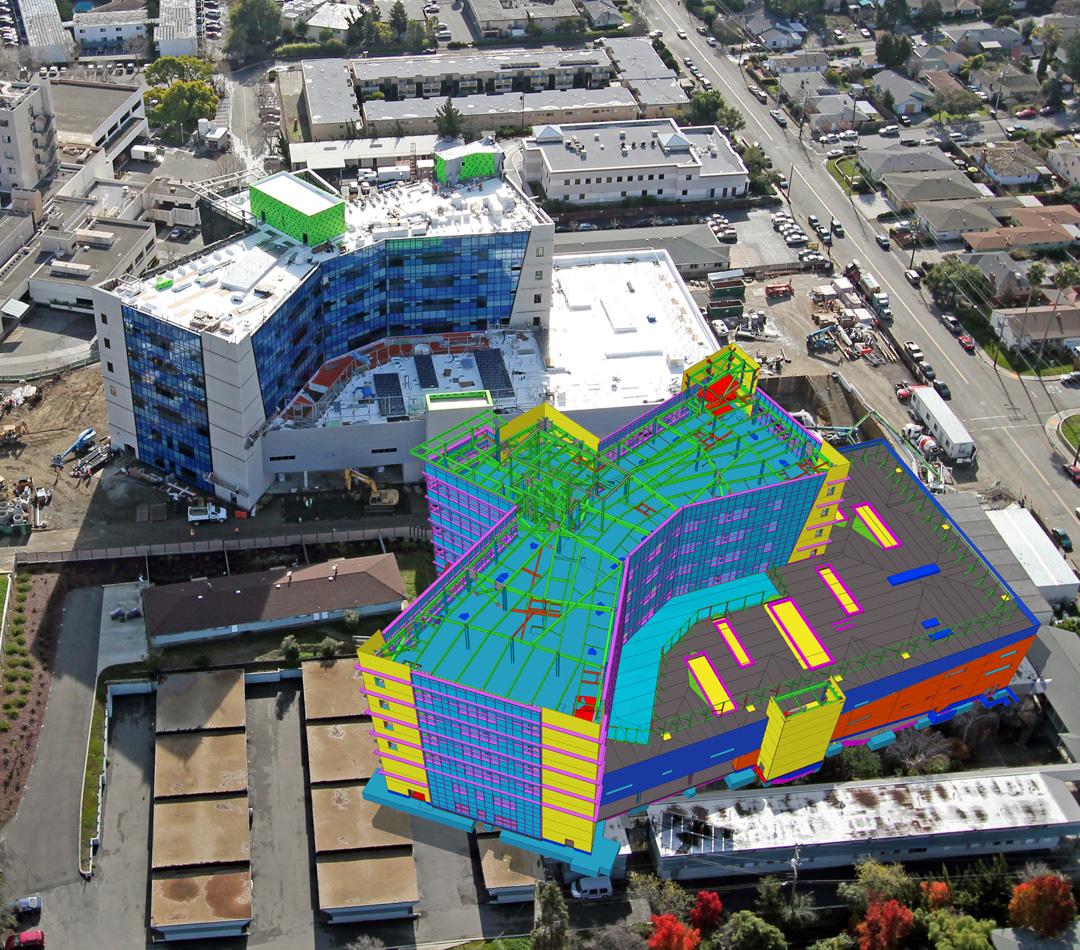 BIM-based IPD in an innovative healthcare project: a unique, cross-organizational IPD team won the BIM category of the Tekla BIM Awards 2010 with their 3D building information model of the Sutter Medical Center (also known as SMCCV and Eden) situated in Castro Valley, USA. The center is scheduled to be delivered 30% faster than comparable healthcare projects in California, which requires implementation of lean construction principles and  technologies such as BIM.

All the firms involved in the project are using the solutions in which they have the best expertise. The models are being developed together, so that the MEP engineer and detailer are working in sync on the same model and so are the architect and contractor. The building information in the models is reliable and the team can accurately extract automated quantity takeoffs whenever they are needed.

“In the US , MEP coordination has become fairly standard on complex projects like this, and the workflows for MEP coordination have been developed and are generally well understood by the MEP subcontractors," says Nathan Wood, project engineer at DPR Construction. “What makes this project so special is the amount of effort that went into the modeling and coordination of the entire core and shell of the building - concrete, rebar, steel, and exterior skin - none of which could have been done without Tekla. And while there were challenges in learning the best way to coordinate around these new modeling scopes, the benefit of identifying these issues before fabrication or installation far outweighs any of the additional costs of modeling and coordination.” 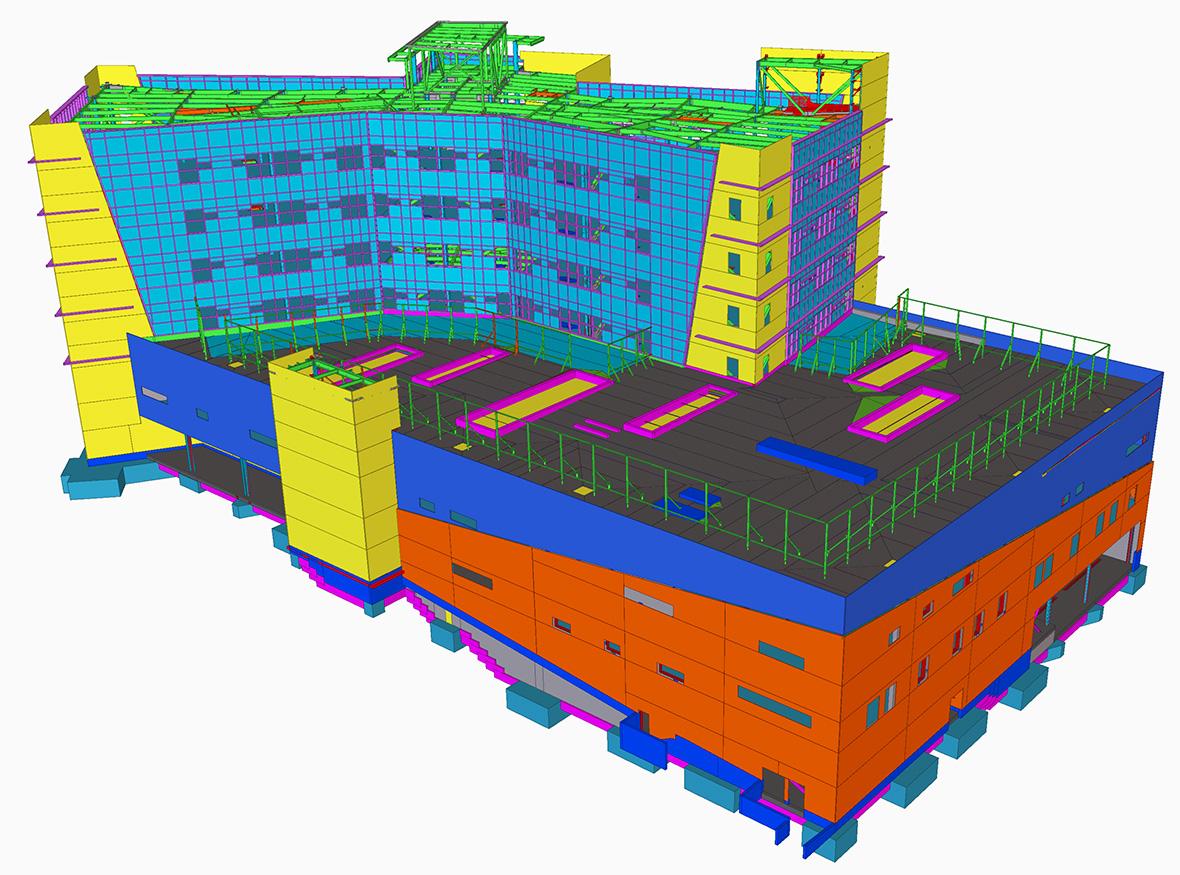 ”Tekla Structures is one of the tools that enables Harris Rebar (reinforcing steel) to be part of this process,” says Layne Olson, BIM manager for Harris Salinas Rebar in California. ”Using Tekla gives us the ability to quickly and accurately reveal and communicate conflicts with design, constructability issues and clashes with other trades. The ability to have experienced and successful people from different disciplines come together builds trust, develops innovation and brings to realization the value added to each and every project willing to focus on the customer’s expectations and goals.”

For rebar coordination, MEP wall sleeves were imported from the MEP modeling software into Tekla, and 50-60 2D DWG files were imported to create the exterior skin fabrication model. Tekla’s ability to import 2D profiles from curtain wall manufacturers was used to create, for example, detailed mullion clips and door frames in 3D. The model created from these 2D drawings was compared with an IFC model of the architect’s Revit model using Tekla. CADuct, AutoCAD MEP, and Revit software were all used to interface or exchange data with Tekla in this project. 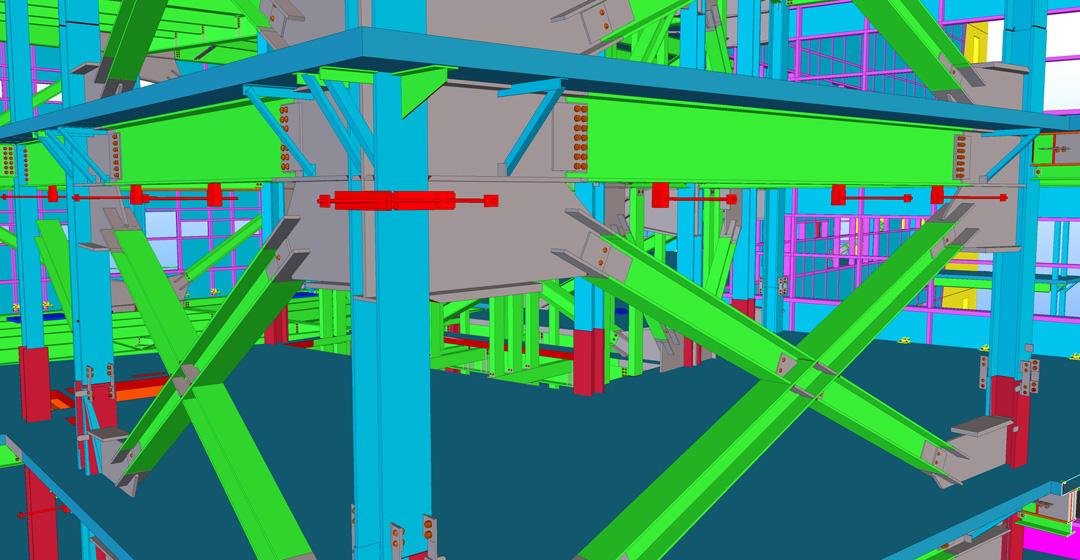 On top of the main contract for the structural steel, general contractor DPR asked Herrick Corporation to model all the elements in the building skin system that connected to the structural steel, to assist in coordinating the various trades. “This is only possible in a 3D model-based environment and dramatically reduces the number of potential fixes required in the field,” says Wayne Morrison, pre-construction manager for Herrick.

The company worked with Candraft, a steel detailing company based in Vancouver, Canada, to develop a Tekla toolkit to be used both within Herrick and by their subcontractors. The aim was to produce a single, standardized model that was information-rich and in a format that was accessible to all members of the project team. The toolkit includes standard reports, drawing templates, API interfaces for RFI creation and management, visualization tools, etc. It has since been used successfully on other projects and has become an integral part of Herrick’s approach to many jobs.

Much of the toolkit was developed using Tekla Open API™ tools. To enable the project team to rely entirely on electronic approval, Herrick and Candraft created a 3D model-only approval interface for use by the Engineer of Record, TMAD. At various times during construction, the project team imported TMAD’s Revit structure, Candraft’s Tekla model, and models from various sub-trades. Drawings were only extracted from the fabrication model after it was approved. ”We find it much easier and cheaper to detect errors and make changes in the model rather than rework drawings,” asserts Wayne Morrison. 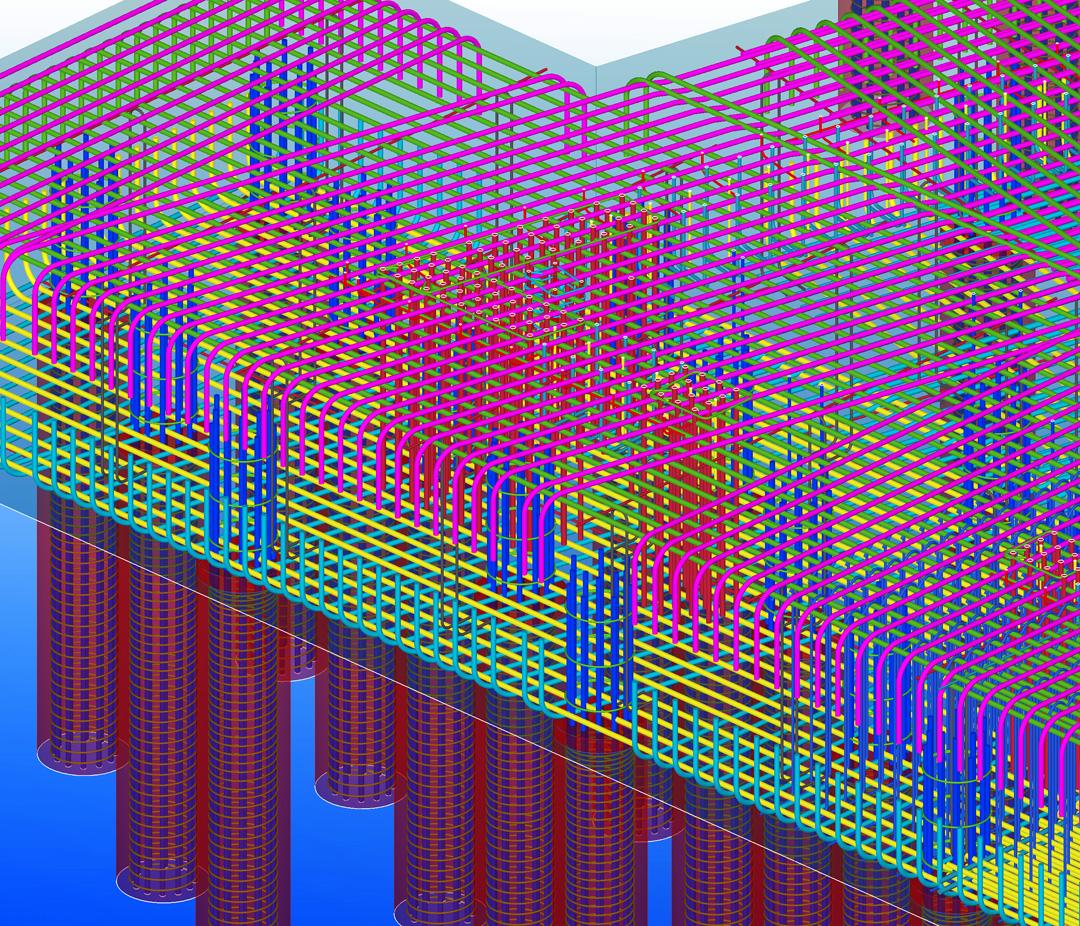 “By creating customized wall layout drawings using Tekla Structures, DPR Concrete was able to see a 10% increase in productivity during wall and embed layout,” says Nathan Wood. “For exterior skin, over 25% of the wall penetrations required for the precast system were moved or removed due to conflicts with congested rebar areas. These changes were accomplished without a schedule delay due to model coordination with the reinforcing bars using Tekla.”

”Sutter Medical Center Castro Valley is the first completed IPD and BIM project for Harris Rebar,” says Layne Olson. ”Working in a collaborative environment utilizing lean construction principles and having powerful tools such as Tekla Structures promotes a successful project that is higher in quality and lower in cost.”

Says John Cooper, president and CEO of Candraft Detailing Inc. of Vancouver Canada: ”Together with Herrick, we utilized the software to the maximum, investing our resources in the development of the electronic model approval interface and training TMAD to use the interface. But it was worth it, the investment paid tremendous dividends in terms of cost savings for all the stakeholders, and in terms of accuracy, interdisciplinary model coordination and on-time delivery.” 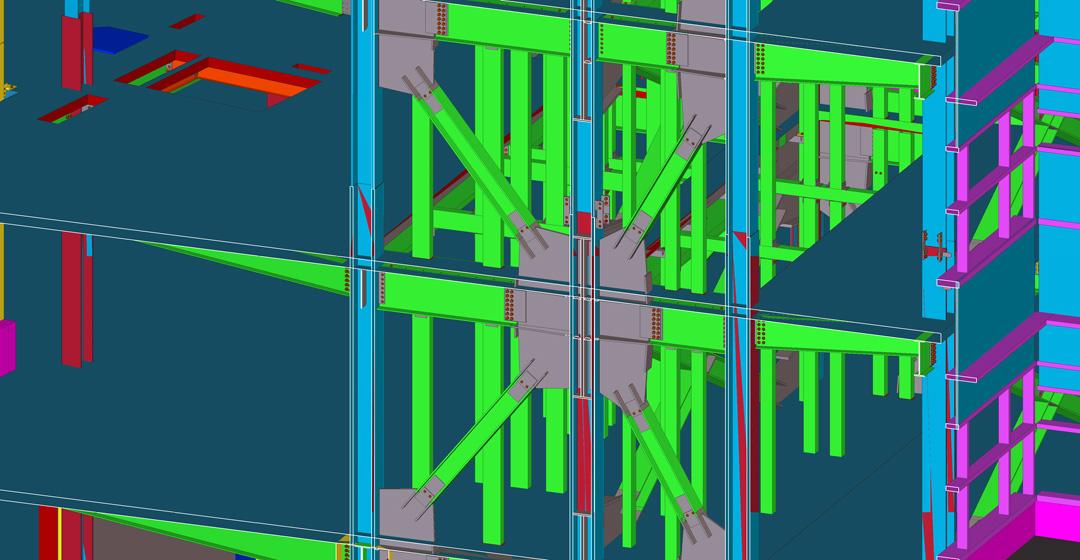 Curt Thon, the project manager at Herrick, believes that Herrick’s investment in BIM-related technology and processes really paid off on this project, pointing to the fact that Herrick delivered ahead of time, with virtually zero errors in the field. This contributed to Herrick completing the structural steel portion of the project 1.6 million dollars under budget. ”It was a true team effort,” he says. ”Special thanks go to the representatives from Sutter Health and DPR who were willing to think outside of the box.”

"Candraft is now working on another major hospital project with Herrick and DPR where we can benefit from this same application and process,” says John Cooper. ”Our Tekla Manager, Ray MacWilliams, is leading our in-house Tekla development team on refinements and enhancements to the model approval interface and RFI and Change Order tracking and reporting systems that will further enhance the BIM process.”

"The Tekla model was very helpful with respect to the exterior skin coordination,” says Nathan Wood of DPR . “It helped us to identify constructability issues, gaps in design, and issues with skin trade interfaces. The feedback from our exterior skin subcontractors was very positive. They were often surprised at what their skin shop drawings looked like when they were extruded into a 3D model. The modeling in Tekla has profoundly affected the future processes of our skin subs as well as our rebar subcontractor.” 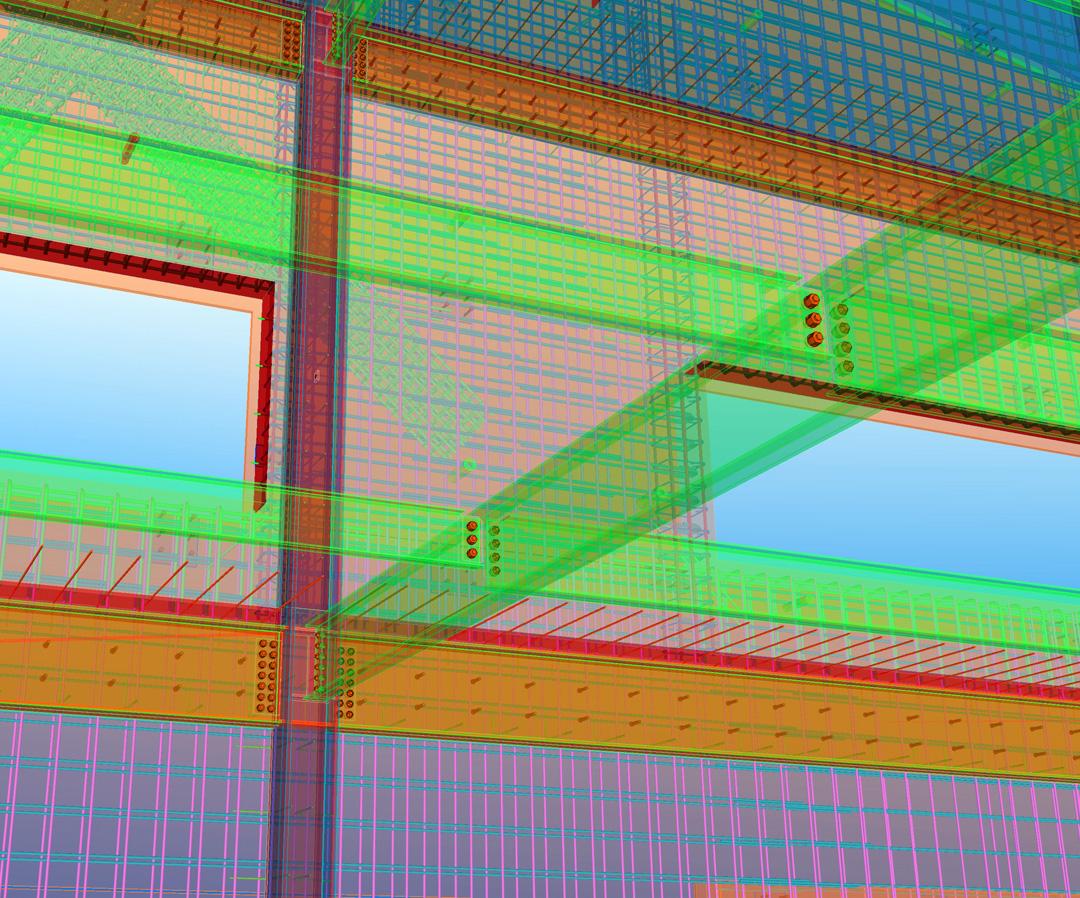 "At the next Sutter hospital project, Alta Bates, we are continuing to use Tekla and BIM,” Nathan Wood says. ”We are continually trying to adapt our model workflow to create a more streamlined design to construction flow. We are also experimenting with the Tekla/Trimble integration along with other construction management tools and 4D scheduling. I am very excited to see new Tekla BIMsight go to the cloud and create a serverbased model that can house submittals, RFIs, etc. It is my opinion that the future of BIM will come from developments and BIM adoption by the fabricators and installers rather than coming down from the owner. The more BIM is exposed to these subcontractors, the more value they see in it for themselves, and the more likely they will adopt it without adding a premium to their pricing. Model-to-field technology will also be integral to the success of BIM adoption.”