New Bella Hotel rising up near the Copenhagen airport consists of two towers that both lean at an amazing 15 degrees. This is something the world has never seen before; even Pisa only leans at a 4-degree angle. “We would not have been able to do this highly complex structure without Tekla Structures,” said project manager Kaare K.B. Dahl of Rambøll Denmark. 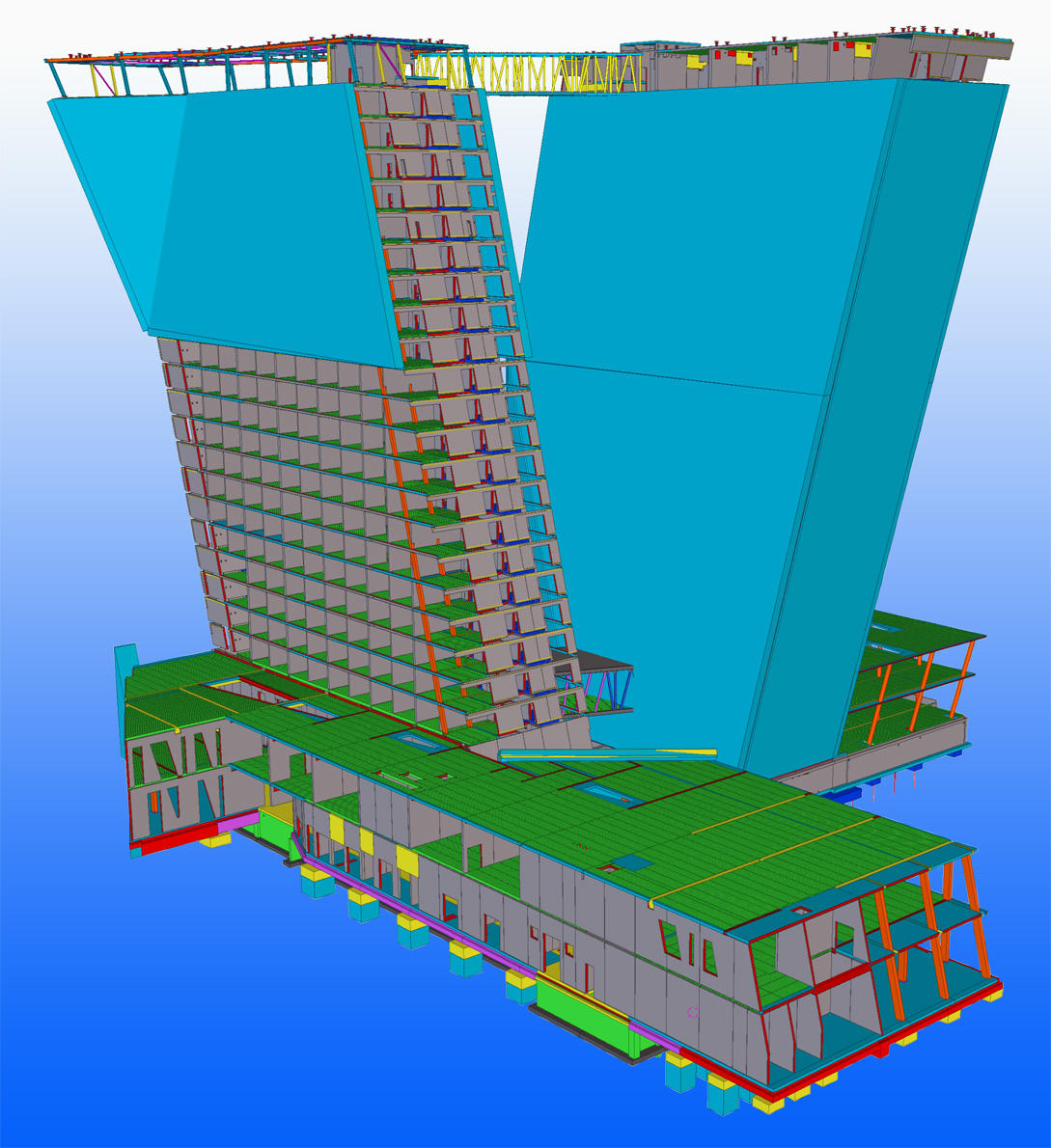 Leaning towers modeled to hold together - a new landmark for Denmark

Located in the Ørestad area near the Copenhagen airport and near the bridge connecting Denmark to Sweden, the Bella Hotel, with its groundbreaking architecture, will be one of the most remarkable landmarks in Denmark. The Bella Hotel is designed by the renowned architects’ office 3XNielsen, who are responsible for a wide range of eye-pleasing structures around the world. When finished, the hotel will be by far the largest hotel in Denmark with more than 800 rooms and situated just beside one of the largest conference and exhibition centers in Scandinavia, the Bella conference center.

Building low on both sides of the road

The reason why the hotel consists of two leaning towers is due to its location. The north road is highly important for the traffic in and out of the conference center and could not be closed. The planned 44,000m2 hotel could not fit on either side on the northern road, so it had to be situated on both. The problem with putting two large towers opposite each other was that half of the rooms would have a view of the other tower. It was decided to make them lean away from each other, ensuring a much better view of the beautiful Ørestad and surroundings. Due to low-altitude air traffic this close to Copenhagen airport, there was also a vertical restriction of some 77 meters above sea level that ruled out the possibility of solving spatial problems by merely building a skyscraper. 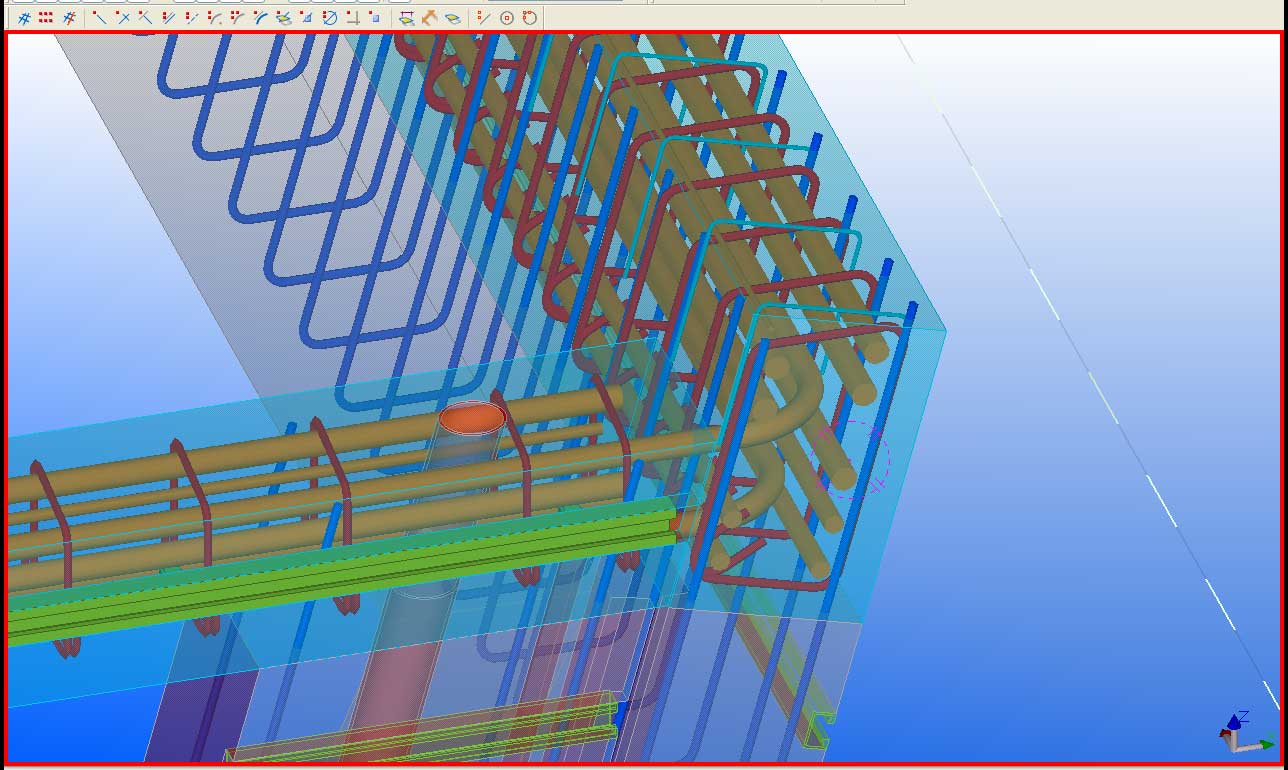 “We would not have been able to do this highly complex structure without Tekla Structures,” says Kaare K.B. Dahl, project manager of the Bella Hotel at Ramboll Denmark. “When a structure of this nature is designed, it is impossible to get a good grasp of it without a 3D model to review. Amongst many other things, the model was extensively used for deciding and understanding how the supporting structure would transfer the vast forces to the foundation.” The use of the model spanned over many aspects and participants throughout the process, involving the architect, steel and concrete fabricators, and contractors.

Construction is all about communication

“Construction is all about communication, and Tekla Structures is a great tool for that,” says Kaare K. B. Dahl. The above-ground level of the Bella Hotel’s concrete structure consists entirely of prefabricated elements, made by one of the largest Danish precasters, Tinglev elementfabrik.

Kristian T Knudsen, head of development at Tinglev, explains: “Having the Tekla model has been a great advantage to us. It’s been much easier to understand this highly complex structure, and it is most probable that by using this technology we have avoided many errors.”

The strains on the leaning structure were unprecedented and called for a new way of creating load bearing concrete structures and reinforcement. “The reinforcement needed for ensuring the stability and transferring of forces in this project is like nothing we have ever done before, and something that would have been very difficult to communicate on a drawing. Being able to model reinforcement in Tekla helped us to communicate its exact positioning to the contractor,” says Kaare K. B. Dahl. 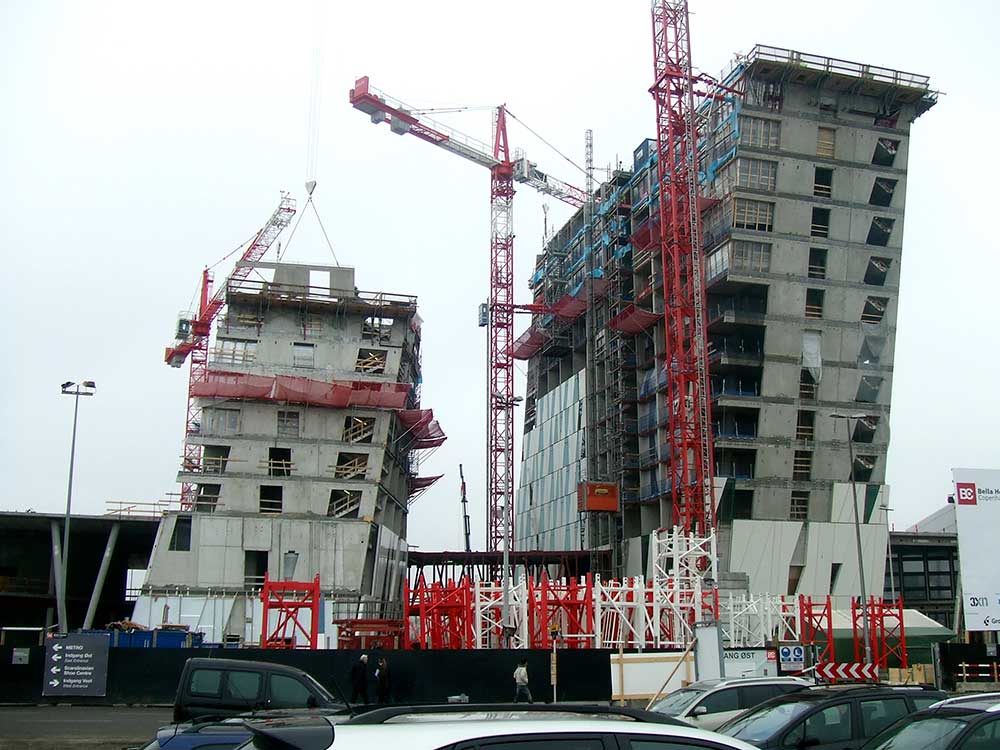 Bo Johansen, project manager for the main contractor NCC concurs: “Using the model on site has been a big advantage for us in this project. Communication with the other players is considerably more intuitive and fast than what we are used to, leaving little room for any misunderstandings that can easily occur in this kind of project.”

NCC has a well defined BIM strategy, and the company has already purchased Tekla Structures licenses. “Even though the use of the Tekla model on site has been very favorable to us, it is only the ‘tip of the iceberg’. There is so much potential in the Tekla BIM, and we are very excited about those prospects, especially because it will make our lives easier and our business more profitable,” says Bo Johansen.

Another strength of Tekla, namely the ability to handle very large models, also came in handy. “Bella Hotel was a very big model with a lot of information, and it is highly important to us to be able to work with the models in a quick and reliable way,” says Kaare K. B. Dahl.

“Tekla is proud to cooperate in many groundbreaking structures all over the world. To see this kind of project take place in Denmark is fantastic, and shows that our technology is making our customers more confident in taking on highly challenging projects. As Tekla Structures is developed in Finland, the leading BIM-country in the world, our range of software can actually offer even more functionality than is used in the Bella Hotel project. It is thrilling to see how the Danish market is beginning to take advantage of the tools and experience we can offer to improve the opportunities and profitability of the Danish construction business,” says Martin Birk, Director of Tekla Denmark.