Rebar detailers at Solve Structural Design used Tekla Structures to detail the raft for the One Nine Elms skyscraper development. The 3D models were critical to staying on schedule for one of the longest continuous concrete pours in London’s history.

One Nine Elms is a skyscraper development under construction on the south bank of London’s river Thames. Upon completion in 2022, the development’s two towers (with 57 floors and 43 floors respectively) will combine luxury apartments, retail outlets and a five-star hotel. The towers are set to be among the tallest residential structures in Europe.

In a bid for time and cost efficiencies, the One Nine Elms developers chose a top-down method for constructing the buildings’ three-floor basement. While efficient for a construction project as a whole, top-down work can be tricky for rebar detailing. To make sense of this complexity, the rebar detailer chosen for the basement – Solve Structural Design – detailed the raft in 3D using Tekla Structures.

“When the drawings for reinforced concrete construction are created in 2D, the chances of missing certain sections of rebar increase. This can cause huge time delays and additional costs for making the fixes,” says Solve Structural Design Technical Director, Barry Penniston. “3D modelling, such as that provided within Tekla Structures, allows for the proposed drawings to be checked quickly and accurately, ensuring full continuity before any concrete is cast.”

“One of the main challenges we encounter when working with a top-down method of construction is ensuring that a means of rebar continuity – mainly couplers and pull-out bars – are provided in the slab soffit for all vertical elements, before moving down to the next sub-level,” says Penniston. 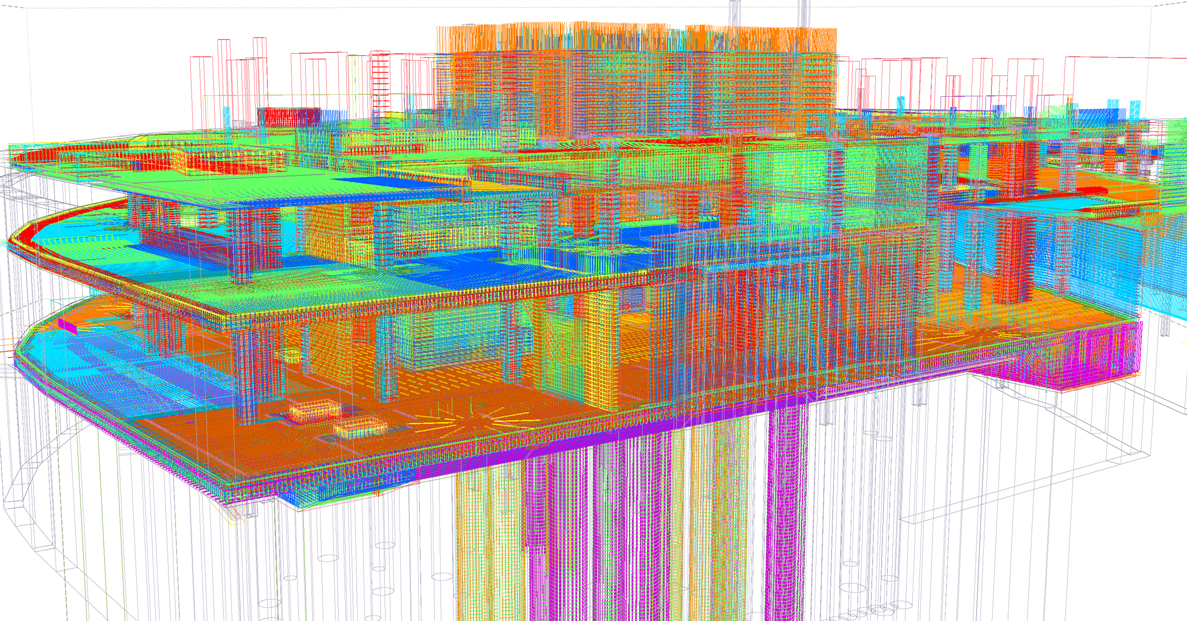 The team used Tekla Structures to create preliminary colour-coded 3D raft models, allowing the contractor to see areas of high congestion and identify any constructability challenges before work began on site. They spent weeks developing, discussing and iterating these models to get everything just right. Areas of concern included the 12 layers of H40 bars at the bottom of the stack, congestion around plunge columns, and clashes at the corner of the batter. Shear rails, chair supports, and the installation of top bars all needed careful planning in Tekla Structures too.

”The Tekla workflow was particularly valuable on the One Nine Elms project, especially considering the sheer amount of reinforced concrete required and the selected top-down construction method,” says Penniston. “Thanks to Tekla and its automatic clash detection, we were able to quickly assess the design intent and spot any potential issues very early on in the detailing process. Any problems or clashes were then able to be reviewed and resolved, before the primary drawings had been issued; streamlining the whole detailing process.”

Designing for a continuous concrete pour

The raft at One Nine Elms is extensive, with more than 5,000 tonnes of reinforcement. Using the 3D models generated by Tekla Structures, the on-site team was able to do the rebar work in just 12 weeks. This meant the concrete contractor could perform the 4850m3 pour as planned in a single 22-hour period – the second-longest continuous pour in its history.

The raft in the taller of the two towers was 5.2 meters at its deepest point and contained around 1,400 tonnes of rebar. This part of the project was the most challenging, as Penniston explains:

“During the 3D modelling process of the core raft, it quickly became evident that there were some serious issues regarding heavy rebar congestion and clashes, particularly around the plunge columns that formed the main sub-structural support and at the corners of the sloping sides,” he says. “Fortunately, the preliminary 3D model highlighted these problems with the base raft’s constructability at an early stage, and we were able to promptly host an online meeting with all project parties.” 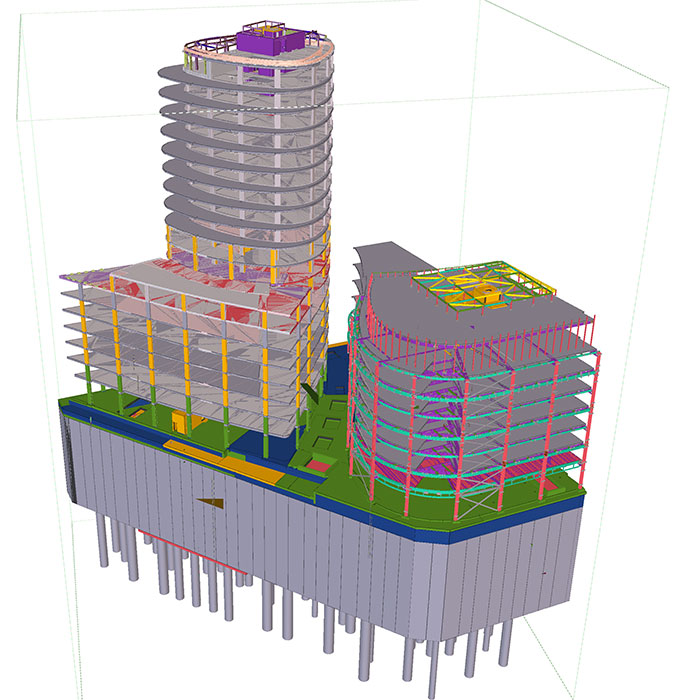 “The Tekla 3D model formed the central focal point of discussions and allowed us to clearly demonstrate the clashes and other issues to the relevant design and site teams. Over the following weeks, various solutions and options were discussed and proposed and a final working model was agreed upon, which was proven to be buildable,” says Penniston.

For the communication and information-sharing part of the project, the team used the cloud-based software Trimble Connect. With so many different teams working together – yet not always in the same physical location – Trimble Connect aids collaboration by allowing everyone to access up-to-the-minute project information from wherever they are. The Solve Structural Design team also relied on Trimble Connect when on-site at One Nine Elms.

“We use Trimble Connect internally for all document administration and filing, task management and model checking, and our One Nine Elms site team was also able to easily access the software through their mobile phones and tablets,” says Penniston. “This allowed them to view the completed 3D model alongside the real-time physical context, assisting them in the placement and installation of the rebar and ensuring an efficient and accurate delivery on site.”