The task of this project was to provide a transmission tower to an overhead power line of strategic importance in Lithuania.

Old local power line is to be decommissioned and replaced with a whole new 330kv overhead power line. This project is part of the synchronization process connecting the Baltic states to European electrical power system. Once reconstructed, the local power line help meet the growing energy consumption of the Lithuanian capital Vilnius. The work consisted of a design phase of one year including project coordination, handling of all construction permits, and work preparations, as well as two years of construction.

The project “330 kV OPL Lietuvos E-Vilnius” consists of 42 km of overhead power lines and a substation, including 14 types of transmission towers, 6 of them unique, at height up to 70 meters above the ground. The project involved 125 units of towers made of 2,719 tons of steel structures, more than 2,950 m3 of concrete and 416 tons of reinforcements.

The challenge of the project was that the time reserved for design and preparation was short. The design tasks were always in the form of updates, and as six of the transmission towers were unique, there was certain uncertainty whether the chosen design solutions would work. Despite this challenge, all 14 types of transmission towers were delivered on time without errors or production delays.

The use of Tekla BIM software in preconstruction (QTO for estimation, sales, etc.) allowed Projektai ir Co to prepare construction quicker compared to usual 2D software. Moreover, the unique design of the towers was created error-free, proven by test assembling at the factory. In addition, Tekla software allowed Projektai ir Co to easily merge the structural model with analysis software. They were able to submit the Tekla models to production, and the fabricator, ŞA-RA Group, had the ability to use the models for automatic production. This saved time for Projektai ir Co to prepare the project according to local laws and regulations and obtain all construction permits. Modeling helped reduce stress and made work more enjoyable during the project and satisfied the architect’s requirements marked on paper.

Peikko embeds from Tekla Warehouse and custom components for joints between angle profiles were used in the model. User defined attributes for drawings enabled e.g. the labeling of drawing packages by location. The deliverables included data files in IFC format to the automated production (processing) system. Tekla Structures model and the drawings were submitted to the client. Buildsoft Diamonds and Autodesk Robot were used for the analysis of the structure. Plug-ins were used for Diamonds and a wired model and CIS/2 file for Robot. In addition, AutoCAD and Excel sheets were used in the project. The preliminary structural model was first created in Tekla Structures and then sent to the analysis software. An updated version of the model was sent back to Tekla Structures after obtaining the analysis results. The architect and MEP designer used PLS-CADD on the project. The design team communicated by exchange of PDF drawings, IFC models and 3D DWG files. 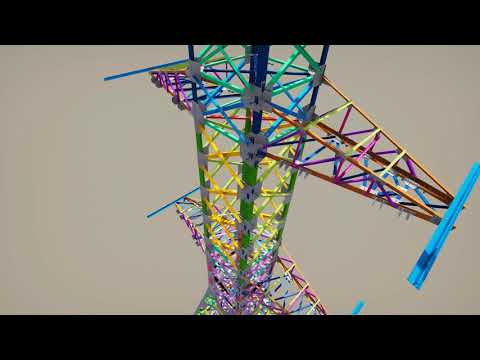