This two-story house with a basement, consisting of cast-in-place concrete, masonry and load-bearing steel elements, included unconventional structural schemes and architectural solutions. The building is 40 m in length and 46 m in width. Its roof is supported by steel beams and bracing, the foundation was made of bored piles, and the floor slab was cast in place.

Despite being small, this project involved several non-standard structural solutions. According to Sostinės Konstruktoriai, the use of Tekla software in the 3D environment made managing the project and working on it easier and helped avoid mistakes. It was faster and easier to produce drawings and quantities, and the team exported Tekla data to the Dlubal RFEM program to produce structural calculations. They used Tekla Structures 2017i SP5 default environment for internal changes of structural design and Tekla BIMsight and its notes feature for model checking. The project involved 21 tons of steel and 390 m3 of CIP concrete. Reference models created in ArchiCAD software were received in IFC and DWG format.

Tekla software was used to visualize and communicate project progress, and the structural model was delivered to the client. Sharing the IFC model helped reduce the number of RFIs. The architects appreciated Sostinės Konstruktoriai’s detailed IFC model and exchanged information via email during the project. The Sostinės Konstruktoriai team was particularly happy with the Tekla reinforcing bar detailing capabilities, being able to exchange data in IFC format, and producing drawings and bills of materials automatically. 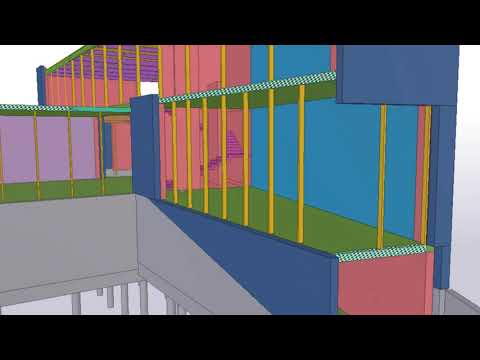