Infrastructure project leads the way towards BIM in Vietnam

The Thu Thiem bridge will become an important landmark in the city of Ho Chi Minh. Nearly 900 meters in length and valued at 80 million euros, the bridge will be built to cross the river Saigon in a central location in the largest city in Vietnam. Future cable-stayed bridge will connect the new Thu Thiem district, currently growing under construction, with the old center. The main span of the bridge is 200 meters long, and the pylon rises 111 meters above water. The bridge includes 4 lanes for cars, 2 lanes for motorcycles, and pedestrian walks on both sides.

The project is co-designed with Vietnamese TEDI South, for whom this is the first BIM project. WSP Finland has trained their staff to use Tekla Structures and Trimble Connect software and in other BIM-related matters. The project’s BIM plan and instructions are based on common infrastructure modeling requirements in Finland (YIV 2015) and the Finnish Transport Agency’s BIM guideline for bridge building. This project is the first multi-discipline, BIM-driven infrastructure project in Vietnam and thus a significant pilot in developing a national building information modeling standard.

The foundations, including the approach bridges, are of reinforced concrete piles. In total, there will be 5700 meters of piling. The bridge includes 56 pairs of cables, which translates into about 6000 meters of cable in total. The main span consists of a reinforced concrete deck and composite beam structure. The deck consists of precast and CIP structures. The main opening includes two primary and two secondary beams and crossbeams of steel. The assemblies, as well as all connections on site, are made by welding.

The rear and side spans are tensioned beam structures of reinforced concrete. They have been tensioned both longitudinally and horizontally. One of the main supports features a special structure that will prevent the bridge from sliding to the side in case of an earthquake. The cables over the sides of the main deck will contain shock absorbers to reduce vibration. Both sides of the bridge will feature lighted steel railings, and precast concrete railings will be installed on the deck. The approach slab is a continuous box girder of reinforced concrete, and the ramps are ribbed-slab bridges also made of reinforced concrete.

Modeling the project was self-evident to WSP. With BIM they ensured that all design disciplines fit together, including the approach slabs, the deck, the routes and other infrastructure. All main deck structures have been modeled in Tekla Structures utilizing the Rhino−Grasshopper link. The team also used WSP’s various components, some of which were created for this project. The model contains all the embeds and structural parts of the bridge. The structural design of the bridge has been modeled up to its final form, but the final production design will include the pylon and the steel structures modeled for fabrication.

Geographically far, yet so near

For data transfer, Trimble Connect was used on various platforms (desktop, browser and mobile versions), which turned out to be a fast and effective way to share design information (IFC, LandXML, DWG, PDF) – in this case between continents. The combination model in LandXML (Inframodel) and IFC format was utilized to check the interfaces between structural entities and to present the project to the team and decision makers. Some of the data transfer has been automated with Trimble Connect. This connection was also used to share the task list. The project was shared among 32 persons in Trimble Connect.

All the reinforcements of the deck structure consisting of CIP and precast units have been modeled. This was also a way to ensure that future penetrations and reinforcement distributions match.

Approximately 8100 meters of spans were modeled. Another challenge was the pylon that curves to both directions with a variable cross section and encapsulating a steel case of equipment. The Rhino−Grasshopper link was used to model the pylon’s anchorage blocks, and Tekla bridge tools were used to model the concrete structure.

Although modeling was demanding, creating the designs would have been even more challenging without BIM, and the end result may not have been as accurate. It was rather easy to detect possible clashes and check the reservations. New technologies and combining the ways of working involved their own challenges that have been solved and learned from during the project. New features published by Trimble have been a good addition, and they've made the work a little bit easier and faster. 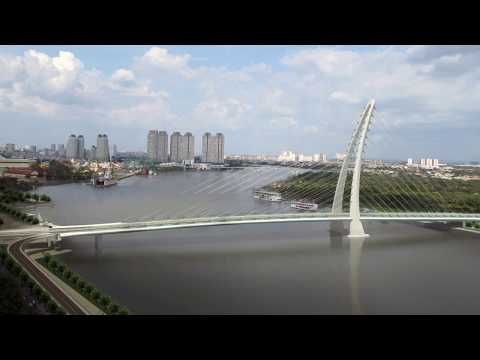