The new property, Princeton, and its existing neighboring property St. Erik's Eye Hospital, are parts of the Scandinavian Life Center project that will offer premises for care, research, education and business in the emerging inner-city district of Hagastaden in Stockholm. The district is one of Sweden's largest urban development projects, intended to become a world-leading knowledge center for research, including Karolinska Institutet, Stockholm University, and the Royal Institute of Technology, and to improve the appeal of Sweden as a country of Life Science.

The Princeton area covers 27,000 m2 (BTA) and will be ready for occupancy in November 2020. The building features 13 floors, two of them underground, and total façade area of 10,100 m2 including 1016 façade elements. The project’s order value is SEK 316 million.

Princeton’s architectural design is significant due its ribbon-like exterior parts connected to vertical side-units. The façade can be characterized by three words: light, reflection and transparency. The building’s color palette is gray so that its steel and glass surfaces can reflect the sky’s changing colors. The bottom part of the façade closer to the street is dark gray granite. The shape being curved and facing inward, the façade helps transmit daylight through the lower floors of the building.

In this project, UPB is responsible for the design, manufacture and assembly of the façade elements. All of the façade structures were designed and developed in Tekla. The main challenge was to design the curved façade elements. Their architectural design is inward-facing and consists of trapezoidal structures with complex geometry and joints. All the joints were developed with a high level of detail (LOD 400). To ease the element manufacturing process, the complex details were designed ready with drill holes and millings for the CNC processing. In addition, all the element drawing file data was automatically and directly transferred from Tekla to the CNC machine and cutting saw. These processes helped avoid mistakes and inaccuracies in the manufacturing process.

In order to optimize their façade and frame structure production, UPB has adapted Tekla to suit their purposes outside prefabricated and steel structures. In this project, BIM was used by all involved parties including engineers, manufacturers, project managers and architects. By using the building information model, the team was able to prevent clashes between the steel, concrete, façade and ventilation/heating systems. Finding and resolving clashes in the model helped save time in the following manufacturing and assembly phases. The model was updated every week by the architects and the steel and concrete detailers. These updates were compared by using an IFC tool developed by UPB to ease the follow-up process of changes. By using Tekla, UPB was able to provide the manufacturers with precise drawing files and information about the necessary spare parts for façade element production.

BIM also helped with the assembly of the building. By using Tekla in the design phase, the team was able to create precise drawing files for the floor assembly plan with specific markings for eight different inclined façade elements. This model helped the assemblers comprehend the complex connection parts and together with engineers resolve all issues and create a precise assembly plan, taking into consideration the project’s specific façade element transformation from straight to inclined planes. In the 3D model engineers were able to resolve all issues before the assembly phase, enabling it to run smoothly without any problems or delays. Overall this enabled a very positive result in the construction phase. 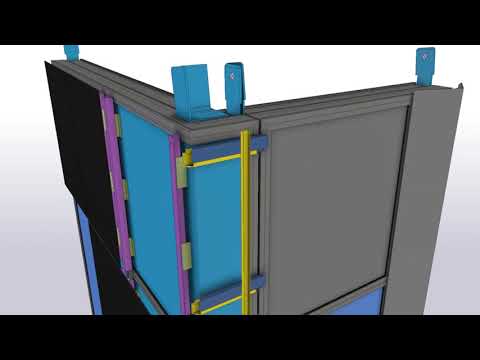