The power plant to be built in Söke, Turkey, will provide steam and electrical power for the processes of the Maren Maras Paper factory’s new investment. The multifuel boiler provided by Valmet will allow the paper factory to reuse its side products and waste. The A-Insinöörit Suunnittelu team provided structural design and seismic expertise to the project. In addition to the boiler, the scope of the assignment included a building for the feed water tank and support structures for fuel and ash silos, electrostatic precipitators, filter bags, as well as flue gas and reactor ducts. The roof height of the boiler building is circa 52 m.

The power plant is located in a highly seismic area where the ground offers very little load-bearing capacity. This set major requirements on the frame design. Turkish design standards steered the detailing so that the connections transmitting the forces had to be designed mainly by hand, which posed a challenge to the design schedule. Altogether circa 12,400 assemblies were modeled and printed out to 22,500 drawings. The most challenging 2-section delivery consisted of two column spaces and three stiffening plates. Document delivery succeeded despite the huge package size. Assemblies were so many that editing was made lighter by using as many connection macros as possible. They helped ensure that all connections match and greatly reduced the number of shop drawings. Despite the high standard of this project, connection development produced very good results. The connections that require special functional tolerance were addressed in the design. Thanks to good collaboration between all parties, the project kept to the given schedule.

Using Tekla in the project was essential in order to coordinate and match structural design with various plant designs for different sections. Project tasks were divided already in the bidding phase. Connection detailing was effective, drawing production was fast, and design errors were reduced to the minimum. The structural designers considered the thermal movements presented by the plant designers in the detailing. The Tekla model was transferred to Staad A&D software, and RFEM software was also used for structural analysis and calculations, as well as the company’s own calculation programs and Excel templates. Early on in the project, the frame was transferred from Tekla Structures to A&D software to iterate the final structural model of the plant. The steel shop used the Tekla model for material orders. An updated native Tekla model of a completed section was sent to the shop from which to obtain the MTO. It was easy to share project information using a combination model of structural and plant design reviewed in BIM meetings. Any problematic issues were brought up and dealt with on time.

The plant design was utilized in the implementation of the structural design. At the connection points where structural steel needed to be joined with the steel in the plant design, the structure was presented either by converting the IFC data into native format or by adding an IFC reference to the assembly drawing. The high level of detailing translated into zero errors found. This is thanks to the seamless collaboration and comprehension of the project team. The number of RFIs was reduced by reviewing source information in regularly held BIM meetings. 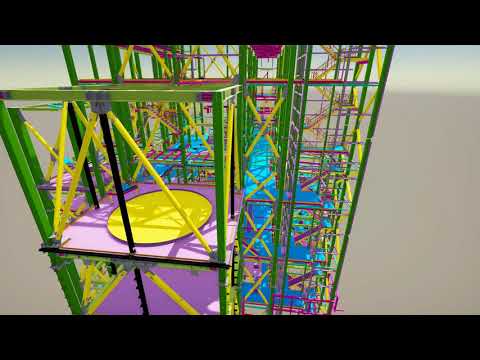