This project is a residential building on a tight urban plot in the Munkkiniemi district of Helsinki. The new apartment building encompasses six floors and 33 new rental apartments of high quality with a floor area of 2520 m2 in total. The apartments vary from 32 m2 studios to four rooms and kitchens in 86 m2. Housing company Helsingin Lopinkulma has a good reputation as a provider of rental apartments of good quality in an attractive property. The new apartments are located in a new complementary building in an open corner of the plot as well as on a new attic floor. The new parts of the building have been designed to fit the street scene from different directions so as not to stand out architectonically.

The challenge of the project was to build the apartments on top of and between existing buildings on a tight plot. The complementary building plan filled one open corner on the plot, and the new attic floor ties the new part into the existing buildings. The design process started early during zoning alteration when the construction potential of the empty corner and the roof was determined in order to create a new plan. After confirming the new plan, the design continued with building permission application and design development. The project was designed in collaboration within the Vahanen Group with NCC Building as the main contractor. The project was completed in early 2019.

In this project, all design disciplines created their own building information models which were combined into one model coordinated and updated by the main contractor. SCIA software was used for the structural analysis and calculations by importing data manually from a respective Tekla Structures model. Both the drawings and the building information model were delivered to the client. In addition to Tekla, AutoCAD was used for frame documentation. The number of change requests was reduced by performing the structural and fabrication design in Model Sharing mode as well as by tight cooperation within the Group between the architect and the structural designer who was using Tekla Structures. The model was regularly updated with the architect’s IFC files and the DWG files of the floor plans. The architect and the MEP designer used ArchiCAD and MagiCAD software. IFC-based hole reservation planning between the MEP and structural designers was considered particularly useful. 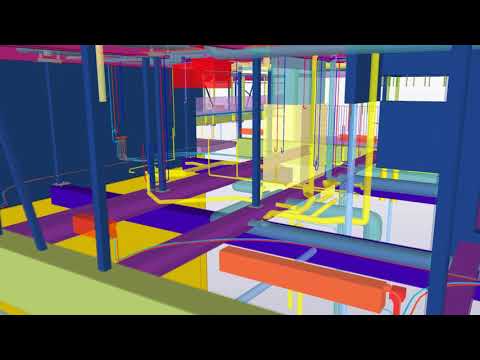