Industrial project with highest security classifications in which designers from different countries were modeling in seamless collaboration. Project was executed very efficiently and rapidly and the environmental effects were considered carefully. The combined models served contractors and subcontractors in production and in manufacturing.

Finnish oil refinery company Neste rebuilds the wastewater treatment plant at its refinery in Porvoo to support its competitiveness and to reduce its environmental impact by improving wastewater treatment and processing capacity. The goal is to ensure that all operations are safe for the local area, including the nearby Baltic Sea. Once operating, the plant will treat industrial wastewater both chemically and biologically.

Involving 6600 m3 of concrete, of which 3000 m3 is prestressed, 14,000 design hours, and more than 20 designers from five different countries, 95 per cent of the site work will be completed in the end of June 2019, only one and a half years from the investment decision. The total investment is worth 60 million euros. Big and round concrete tanks were made as prestressed structures. The main designer Neste Engineering Solutions used 10 kilometers of prestressed reinforcement (tendons) ensuring zero cracking in the tanks.

The project was performed in a very tight schedule. Prestressing of reinforcement was involved to avoid excessively thick walls and slabs in the reservoirs. Neste Engineering Solutions being an internal department, the team was in charge of the schedule, negotiations with contractors, design supervision and communication with contractors using visualizations from the model, as well as drawings delivery. Due to Porvoo City’s requirements, Sweco functioned as a third party in checking the drawings. Sweco also provided support in the early stages of basic design. Because the plant treats very hazardous industrial liquids and the tanks are located close to the sea, the project is classified to the highest safety category.

In addition to their standard tools, Tekla Structures and Tekla Model Sharing, the design team used Tekla Tedds software widely in concrete calculations. They were able to use many modules in the project, including Retaining Walls, Punching, Shear and Pad Foundations. In addition to preconstruction, including QTO for estimation and sales, and construction, including pour sequencing, reinforcing bar coordination with the rebar detailer and fabricator, material QTO, field layout, and progress and cost monitoring, HVAC design was also done in Tekla Structures including a reference model of piping design. Moreover, Tekla was used in mobile devices during the project. Custom components involved include reinforcements for curved and circular concrete elements, and UDA fields were used for specifications.

Deliverables from Tekla Structures include drawings and the model to the client, data files for production planning and management software at early stages of the project, data files to automated production processing system for steel structures, and IFC files to companies involved in equipment production to confirm the sizes of ordered structures. Also, DGN files were used to transfer data between different design disciplines and all architectural design and related changes were communicated using Tekla. In addition to Tekla Tedds, Robot Structural was used in analysis and design. The plant design system used in the project was Intergraph Smart3D.

According to the design team, the advantages of using 3D and Tekla in an industrial project of this type are wide. Thanks to the connection with other departments through support models, the Tekla model provides a realistic picture of the future construction site as well as any detailed changes, which helps avoid clashes, changes and extra costs. Modeling enables better understanding of the design process, more flexible and wider technical decisions, and considerable time savings. The snapshots from Tekla were considered a very effective tool for explaining problem spots. 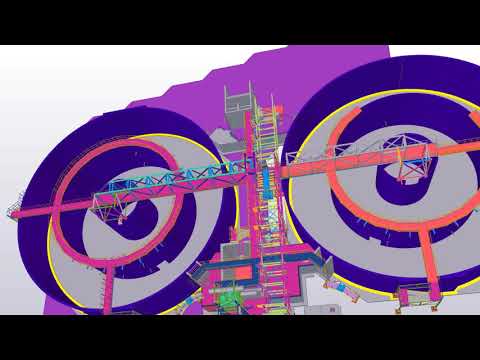