BIM helped reach an understanding with the city planning committee

Despite a challenging outset, information flowed and cooperation succeeded between the participants of this apartment house project that was extensively modeled. The project was technically demanding and located in a tight plot that required detailed modeling in advance. Helsinki city plan update allowed building attractive, well connected apartments near a metro station.

The project consists of three apartment houses located in one block divided between two condominiums. The buildings encompass 5 to 9 floors. They share one parking garage in the basement, retail space on the ground floor, and dwellings on all other aboveground floors. The bathrooms are prefabricated units. The buildings stand on bored piles and ground slabs. The structures mainly consist of prefabricated units. The facade features colored concrete and brick tiles. Part of the upper ceiling is wooden and slanted, another part is flat and made of lightweight aggregate.

BIM played a central role in the project from zoning to construction. The software tools were used extensively in every phase of the project, sometimes stretching the limits of their performance. Modeling the designs added cooperation and visuality in the project. Modeling helped understand the elements of the project, supported the decision making, and became an important tool in production planning and implementation. Rich building information has been utilized in project development, procurement, and facility management. 98% of the cost items were calculated based on the model, and thanks to its rich data content, procurement could mainly rely on the model. BIM enabled a lean data flow: the right information at the right time in the right place for the right purpose.

Innovation would have been missed without modeling

BIM enabled co-innovating necessary construction and engineering techniques. The city plan required a brick facade that would have been expensive to lay on site. BIM is an important part of the Big Room method developed by Fira that was used together with the architect, Fira and precast fabricator to create a brick-tile facade element with decorative surface. BIM played an important role in coming to terms with the city planning committee.

Successful design of the parking lot turned out crucial for the project. The parking area was fitted in the block to serve different types of cars and drivers. By co-developing technical solutions, the project team was able to create 49 m2 of extra space for the residents. Smaller apartments now have a good 0.5 m2 of extra space in the most critical locations.

This project was the first to utilize Tekla Model Sharing at A-Insinöörit. People got used to the new way of working quickly, and it was easier to access the old versions and save the local model so that the project data was kept up to date. Design statuses were published in the shared model. General contractor was able to access the model personally to review status and other necessary details. This allowed the structural designer to use their resources in actual design. By using the BIM Publisher tool in Tekla Structures, the IFC model was published during the night, not during valuable working hours. The hole reservation tool made it easier and faster to check penetrations and details that required special attention. In addition to Tekla basic numbering, the units and assemblies were identified by ACN that sorted identical units into order.

It was clear since the beginning that BIM would be used in the project. It was modeled 100%, and in the production planning phase BIM utilization brought clear benefits. The models have become daily tools on site. New tools and ways of working have been applied during the project, for example, modeling was utilized to design the work for a demanding CIP beam and to negotiate subcontracting to provide a clear visualization of the intended end result. On site, the supervisors and subcontractors used Tekla Field3D mobile application to understand the demanding reinforcements needed for the air-raid shelter, for example. It was easy to extract the quantities for concrete and formwork from the model. Reinforcing steel for civil defense shelters was modeled per geometry and data according to Celsa Steel Service’s requirements so that the reinforcing bars could be fabricated based on the structural model. The site received an IFC model of all reinforcements modeled and delivered so that they could verify the contents and fabrication status of the deliveries with an application provided by Celsa. Compared to a traditional reinforcement process, modeling reduced the lead time from order to delivery by 20 to 30 %, which reduced scheduling pressure and the risk of errors. A tool developed by Parma was utilized in hollow-core slab production. It allowed visualizing the manufacturing status in real time and controlling it according to design and on-site situations. This project was a pilot for Fira’s 5D production management system that carries the quantity, cost and scheduling information seamlessly throughout the construction project. 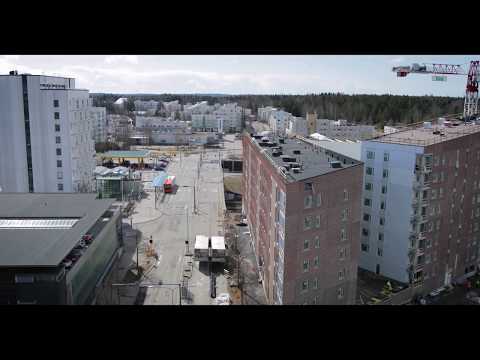