JUST is the winner of Tekla BIM Awards 2016

The jury was very pleased with the JUST project with BIM-based cooperation and diverse BIM use, owner’s active role in adopting BIM processes and successful knowledge  management. The new social and health care center JUST was entered by Alliance JUST.

Open Approach to BIM in use in Järvenpää

The new social and health care center JUST covers an area of 13 664 brm2 with total volume of 60 600 m3. In addition to the center, a parking facility and a tunnel are built. The project is expected to be finished by the end of 2016. The planning and construction are executed using a new type of project alliance. The owner, facility user, planning team, and general constructor are all contract parties making the principles of open building implemented in use.

To ensure the co-operation between the parties and the diverse utilization of the information models, the project employs the VDC way of working (Virtual Design Construction), which was developed by the University of Stanford and is used in NCC as standard during information modeling. A virtual reality cave facility is in use, where the end-users have explored the JUST in virtual reality.

One Property in Two Phases

JUST is divided into two execution phases.  In the first stage,   (the phase of virtual planning and construction) a service provider put together a planning team and together with the owner they composed proposals, general design, and building permit plans.  This was also a pilot project for Tekes, the Finnish Funding Agency for Innovation. In the ongoing second phase the property is being developed by the planning consortium, the contractor, and the owner together, according to the production implementation plan.

Building according to open building principles have brought on challenges to old and set new ways of working. For instance, the end-users have influenced on how the different rooms and spaces are situated.  The fixed structures were planned and constructed separately from the changing spaces. Dividing the planning and constructions into separate sections allows for the still changing designs to be finalized with additional time schedule while fully designed sections of the building have been already delivered and installed.

The method has been unique in Finland and the implementation met the expectations with the help of NCC’s VCD team, long-term development, and clear BIM instructions.

BIM based design coordination has been a success, and the produced design are exceptionally free of errors and conflicts. Inaccurate plans have been a rare sight in the building site.

User: The social and healthcare services of Järvenpää city 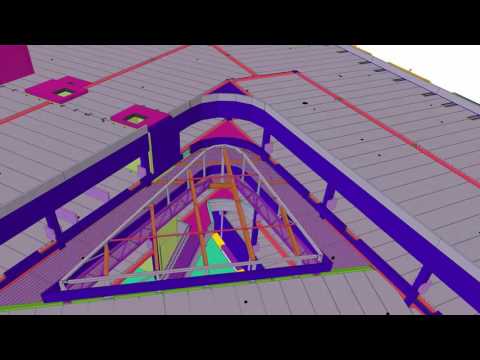