New infrastructure to a new office campus in Espoo

This large development included designing three bridges, several pile-supported slabs, and two support walls for the slabs at the new Oasis of Professionals office campus in the Hatsinanpuisto district of Espoo. The support walls and the slab also serve a larger Jokeri Light Rail development to connect the cities of Espoo and Helsinki. The project requires 7,200 m of piles, 4,600 m3 of concrete and 580,000 kg of reinforcements.

In its role as the engineering consultant, Ramboll Finland is responsible for geotechnical design, municipal engineering and engineered structures in this project. The design and phasing of the project needed to take into account the nearby Monikonpuro conservation area and connecting with the existing district heating, drainage and water-supply systems. Engineered structures were modeled in Tekla Structures’ (2018) Finland environment in great detail in order to ensure design quality, avoid clashes with municipal engineering, and make it easier to produce design documents.

BIM was key in the design project. Trimble Connect was used to combine models and check for clashes. Some of the design was done outside Finland with the help of Trimble Connect and Tekla Model Sharing. Due to complex deck forms, some of the bridges were modeled using the Live Link tool between Tekla and Grasshopper.

Coordination of different models and engineering disciplines created a challenge

The biggest design challenge was to coordinate between the different models and engineering disciplines. Each five Tekla models were daily updated by three designers on average, so the focus of project management was to supervise model development. The models were reviewed in Trimble Connect and comments transmitted with Trimble Connector to Tekla models. The tool made cooperation easier with other engineering disciplines, including municipal and Jokeri Light Rail engineers. Another challenge was the geometry of certain bridges, which was solved with the help of the Tekla-Grasshopper link. Tekla Live Link enabled combining the best qualities of Rhino and Tekla so that Rhino was used for modeling the complex geometry and Tekla to accurately detail the structure.

Design information was exchanged in IFC, DWG and 3D DWG formats. A visualization model of the area was created in Rhino and the geometry imported to Tekla from Rhino in 3D DWG format. The structures were modeled in Tekla by using these visualizations and other reference files provided by the engineering disciplines. Ramboll produced pile and rebar lists from the model by using the Multireport Generator. LUSAS software was used for analysis and design and the data updated to the Tekla model based on the designer’s drafts. The client received both the drawings and the building information model of the project. 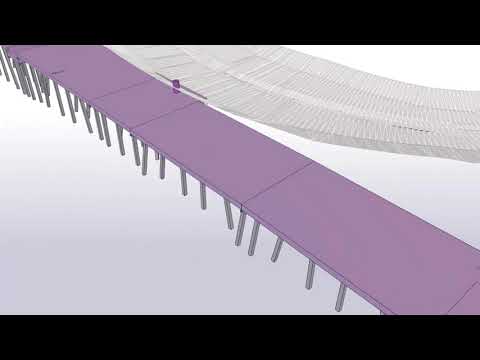