EstPak Plastik’s new plant includes main office and production area created mainly for thermoforming plastic trays and films. The company is particularly proud of their investment in an rPET extrusion line. The extruded rPET sheet is made of 100% recycled PET. With the new line, the company can contribute by minimizing their ecological footprint and the impact that a plastic industry may have on the environment. In the new facility, retransmission material is mainly used to manufacture plastic packaging for the food industry. The collected and pre-cleaned PET bottles receive a new life, which will have a positive impact locally, too.

At present, the production is split 35/65 between domestic market and exports. The new innovative process included in the new building is to satisfy the company’s need for increased business. In January 2017, the architect drew the company’s attention to irregularly placed grids inclined under 45 degrees so that the building looked like a rhombus from above. Overlapping with a previous project, the designers only had some days to make preliminary static analyses and build a basic 3D model using just a few architectural drawings at their disposal at that moment. The concept of irregular building involved everything inside and outside of the building to follow the directions of the gridlines. From engineering point of view, the architectural design was not logical, would cost more, was hard to produce and detail and eventually to keep in schedule, but the architect was unwavering about the original design.

Fast modeling, drawing production and better overview of the project

Once the static calculations and profile dimensioning were finished, the team continued with the structural model. The gridlines were not parallel with the edges of the sloped roof. This meant that the bottom layer of the roof (corrugated steel sheet profile) and the structural element profile (top chord of the truss) were also not parallel but twisted in relation to one another. The solution was to weld a U-shaped bent plate, with unequal vertical sides, to the top chord of the trusses and roof beams. It was hard to connect the joints as nearly all elements were on different planes. Most of the details were custom-made, and the detailing took about three times more compared to a more a classic building solution.

At the same time other team members were designing reinforcement for concrete columns and masonry layouts and producing workshop drawings in different BIM software. Another specialist was making drawings of hollow core slabs and floors. The building site was waiting for input, and frequent meetings, work coordination, and answering questions from the construction site took a lot of time. The architect’s concept was followed throughout the project, however, and in addition to the structural design, this involved utilities arranged along the gridlines. Even the staircase has a rhombic lay-out creating a feeling of walking sideways. As a result, there is a really unusual structure erected in the vicinity of Tallinn. It may look special, but it is functional and meets the client’s expectations.

The main challenge of the project was the complicated geometry of the building including a large amount of unique connections. The limited timeframe was also a major challenge: the project lasted nine months from contract signing until the structure was erected onsite. The project needed to be communicated to subcontractors who were working in 2D. The static calculations were also specific: for example, the internal forces of vertical diagonal braces were bigger than in conventional buildings and considering the diaphragm effect during the design of corrugated profile sheeting was complicated due to the variable width of the roof at the gables.

In the designers’ view, Tekla Structures made the project possible. The analysis model for static calculations was built in Tekla Structures and exported to Autodesk Robot. Tekla BIMsight was used for exchanging IFC files between the project disciplines and performing clash checks. The cloning of drawings and creating automated workshop drawings and material specifications saved plenty of time, and there were no clashes of details on site. The steel contractor used NC files for cutting materials. Collaboration worked between Tekla Structures and Autodesk Revit via the IFC format inside structural team. Main communication, clash detection and RFIs were solved with a merged model in Tekla BIMsight. The most complex components were designed in a separate 3D model, and drawings were produced for quality assurance.

Cooperation with the architect benefitted from the 3D model that was very precise and detailed and enabled solving the architectural features. The 3D model also helped highlight possible problems and develop the necessary solutions. The 3D exchange of information contributed to avoiding structural problems. Daily comments and changes were sent by email and using an updated IFC. 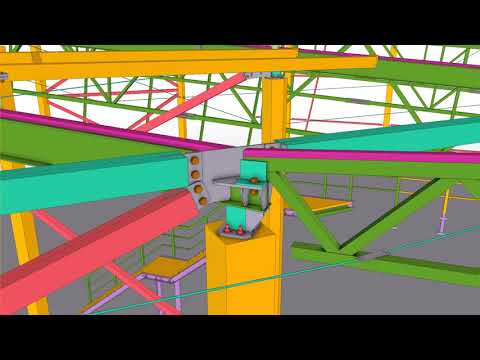